An undercover officer says a man accused of stabbing a constable and striking four pedestrians with a cube van in September, 2017, detailed the attack while in a holding cell the next morning.

The RCMP officer, who cannot be named because of a publication ban, testified Monday at the jury trial for Abdulahi Hasan Sharif. Mr. Sharif, 32, has pleaded not guilty to 11 charges, including five counts of attempted murder.

The undercover officer told the court that he and Mr. Sharif had a conversation as they were kept together in a downtown cell for just more than an hour.

“Mr. Sharif advised that he did something really bad ... that last night was like a dream,” the Mountie told the jury. “Mr. Sharif stated that he wanted to kill himself last night.”

He said Mr. Sharif went on to detail the attack on Edmonton police Constable Mike Chernyk outside an Edmonton Eskimos football game and how, as Mr. Sharif fled from police in the van, he hit several pedestrians.

“Mr. Sharif stated that he was driving down by the stadium and the road was blocked off,” he said. “There was a police officer that was directing traffic ... the police officer flashed his light at him.

“Mr. Sharif said he got scared so he hit the cop with his car.”

Constable Chernyk earlier testified that after he was hit with a vehicle, someone was on top of him, stabbing him in the head. The undercover officer didn’t testify about whether he and Constable Sharif talked about the stabbing.

The Mountie said that Mr. Sharif told him he ran and hid about 300 metres away for about two hours.

“Once all the police were gone, he left his hiding spot and went to a U-Haul truck he had the keys for,” the officer testified.

He said Mr. Sharif then told him that he was stopped by police in the cube van and took off, running red lights with 10 to 15 police cars chasing him.

“Mr. Sharif stated that, at one point downtown, he hit three to five people with the U-Haul truck when he was trying to get away,” he said. “The U-Haul truck was heavy on the top and one of the cop cars hit the back corner of the truck and it flipped on its side.”

The Mountie said Mr. Sharif then told him police smashed the van’s window and hit him with electricity.

“Mr. Sharif advised that he thought the cops were going to kill him.”

The officer said Mr. Sharif wondered aloud if life would be better in jail than out, where his work permit had expired and he had no family or friends. He told the officer, however, that he was scared he would get beaten in jail.

“At one point, I spoke about how much I hate cops and I went back to the cop getting run over,” the officer said.

He said he then used his hands to show the running over of Constable Chernyk.

“Mr. Sharif shook his head yes and ... gave me a smile and a fist bump,” the officer testified.

Mr. Sharif, who is not represented by a lawyer, has declined to ask questions of any witnesses, including the undercover officer.

The trial is expected to last until early November. 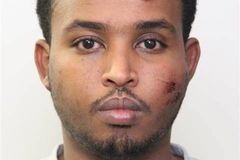 Edmonton police officer thought of his kids as he struggled with attacker
October 3, 2019 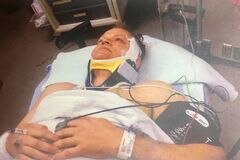