The University of Saskatchewan has too many barns. There’s the Rayner barn, the hog barn, the brooding and rearing barn for poultry, the barn out by Clavet, Sask., to name a few. Some are working barns that are part of larger research facilities, some are historic landmarks but not much more. Then there’s the seed barn and the old poultry science building – the school says those century-old barns have got to go.

But first, the university needs to find some takers.

The university advertised the barns for sale and removal in June, giving prospective buyers until the end of that month to submit bids. After the deadline came and went, news organizations picked up the story and spread the word further. The most recent deadline passed Aug. 28, again without any proposals.

The barns encapsulate the conundrums that accompany old buildings. Which barns – or grain elevators or schoolhouses or armouries or lighthouses – should be preserved? At what cost? And why, exactly?

“We’re not a museum,” said Greg Fowler, the university’s vice-president of finances and resources. “History is expensive.”

Both structures are in the way of expansion plans on the main campus in Saskatoon. They are pricey to maintain. The university has not used them for their intended purposes for decades. The institution tried to find other uses for them but came up short.

“These older buildings are just not equipped to serve modern research,” Mr. Fowler said, noting as a university administrator, he must be mindful of how tuition and other funds are spent.

The seed barn was built in 1915 and owned by the federal government, until it was turned over to the University of Saskatchewan in the 1950s, when it quickly morphed into a glorified storage unit. Plans to convert the hulking green and white barn into a child care facility proved too costly in 2012. The university has moved it a few times, most recently in 2013, as the school struggles to find a balance between history and practicality.

The old poultry science building is part barn, part classroom, part office space. It was built in 1918 and occupies its original spot on campus. It looks like an English cottage attached to a petite barn with a gambrel roof. It was once a cutting-edge research and teaching facility, but hasn’t been used as an animal sciences facility since the 1980s. Now, it is a fragile campus misfit, despite being on the school’s own heritage registry.

Kristin Catherwood is director of living heritage at Heritage Saskatchewan and wrote a graduate thesis on barns. She loves these Prairie symbols, but is sympathetic to those who can not find a reason or money to preserve their barns – especially in Western North America.

“It is an unpopular choice,” she said. “People don’t want to see the barns go, and yet, the financial burden of them is enormous.”

Some old stone barns in Europe served their original purpose for centuries, she said, and because of this, they were better maintained and easier to save than their wooden counterparts in the Prairies. In Western North America, wooden barns were built to last, but they were constructed in an era of incredible change in agriculture.

Barns built in North America after the First World War were designed to house workhorses, she said. But during this era, tractors were replacing workhorses, making the barns’ original purpose obsolete. In North America, Ms. Catherwood said, old barns spent most of their lifetimes being repurposed, often as storage for grain or the machines that made them extraneous.

It is difficult to justify saving buildings like barns and grain elevators unless they have been renovated to serve a tangible purpose, she said. But this rationale is risky because Saskatchewan is short on architectural heritage.

“At some point, will there be any left?” Ms. Catherwood said.

Heritage buildings that have been moved from their original locations can still be historically valuable, experts argue. The university’s desire to relocate the barns is an appropriate preservation strategy, according to Sasha Tsenkova, a professor at the school of architecture, planning and landscape at the University of Calgary.

“The main message is do as little as possible to change and actually change as much as it is necessary,” she said.

Universities, often hemmed in by cities that grew up around their campuses, must be flexible when it comes to protecting heritage in order to thrive, according to Scott Weir, a principal with ERA Architects Inc., which specializes in adoptive reuse and cultural planning.

“The best heritage considers factors beyond just the building itself,” he said, noting the University of Saskatchewan maintains a deep roster of Collegiate Gothic-style buildings. “It would consider what is the future viability of the overall site. The university may need to lose some of its things in order to be the healthiest institution it can be.”

Indeed, the university wants rid of the seed barn and poultry science building because they sit on land earmarked for expansion. The poultry barn will be more difficult to move than the seed barn, but its relocation is more urgent: It sits where the university plans to soon build a new engineering complex.

Mr. Fowler, the university’s vice-president of finances and resources, said about eight parties showed interest in buying the seed barn and the same number considered the poultry building, but none put in a bid. The university did not name its price. At this rate, it could end up paying someone to take the barns.

But even then, the university would still have a historic barn. The school’s old stone barn outranks the poultry and seed barns on the list of iconic buildings on campus. The school has invested a “significant” amount of money to keep the old stone barn structurally intact so the university can develop a plan for it by June, 2021, Mr. Fowler said.

“We have this wealth of history,” he said, noting that barn is on the margins of the priority list. 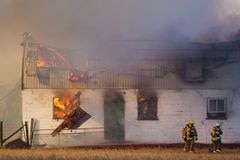 Two tornadoes touch down, one destroys home and barns in Saskatchewan
August 1, 2016
‘They’re like living art’: Why people are dismantling and rebuilding old barns as spectacular homes
September 16, 2015
Follow Carrie Tait on Twitter @CarrieTait
Report an error Editorial code of conduct
Due to technical reasons, we have temporarily removed commenting from our articles. We hope to have this fixed soon. Thank you for your patience. If you are looking to give feedback on our new site, please send it along to feedback@globeandmail.com. If you want to write a letter to the editor, please forward to letters@globeandmail.com.
Comments