Climate-change activist Greta Thunberg braved a blizzard on a snow-covered glacier in Jasper National Park this week to learn from the scientists who study the ice.

In a tweet to her followers, the Swedish teenager thanked scientist John Pomeroy of the University of Saskatchewan and Parks Canada ecologist Brenda Shepherd for educating her “on the effects of the climate and ecological crisis on stunning Jasper National Park.”

She met with Ms. Shepherd on Monday to visit a white bark pine forest and talk about the battle with mountain pine beetle and blister rust, said Parks Canada spokesman Steve Young.

Prof. Pomeroy, director of the Global Water Futures program, said his team from the Cold Regions Laboratory in Canmore, Alta., was asked to talk about glaciers with the 16-year-old and her father, Svante Thunberg.

They spent about six hours Tuesday on the Athabasca Glacier – one of the most visited in North America – in the Columbia Icefield.

“She was very brave to go up on a snow-covered glacier in a blizzard in October. She’s clearly utterly fearless for a teenager,” Prof. Pomeroy said in an interview Thursday.

“We took her up on the ice quite a ways in and talked to her about the retreat of the glacier.”

Prof. Pomeroy told her about how the glacier had retreated two kilometres since the late 1800s and how it had lost many tens of metres of thickness in the past few decades.

“Our recent measurements on it are showing a substantial climate warming in the region,” he said.

Prof. Pomeroy said it’s easy to see the impact by looking at the glacier, but they were also able to show Thunberg why by digging into the ice.

“This year alone we lost six metres of ice downward off the top, six metres of melt, which is the highest we have ever measured,” he said.

That melt, he said, occurred even though it wasn’t a particularly warm summer.

“The reason was due to ash and soot that had been deposited on the glacier in previous years and now we have algae growing on the glaciers, binding the ash and soot to the ice and darkening the glacier,” Prof. Pomeroy said. “It’s absorbing much more solar radiation and melting away as a result.”

He said Ms. Thunberg was very interested in seeing the algae and learning more about the glacier’s retreat.

“Clearly, as is very apparent in her public persona, she is a very serious person, but clearly a very smart person,” he said. “She’s a strong figure with strong views. From a science end, I like the message, ‘Listen to scientists and focus on the science.’ “

Ms. Thunberg has turned her climate fight into a global movement that has seen her speak plainly to world leaders, chastising them to do something before it’s too late to reverse catastrophic weather changes. She also inspired Fridays For Future, which are weekly protests to highlight the need for urgent action aimed at halting climate change.

She will visit Vancouver to take part in what organizers bill as a postelection climate rally.

Ms. Thunberg attended a similar climate rally in Edmonton last Friday that attracted thousands of people to the Alberta legislature. She also met with two northern Alberta First Nations to learn more about the oil sands. 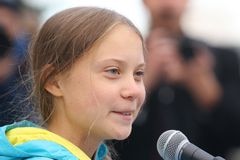 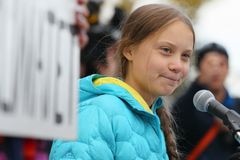 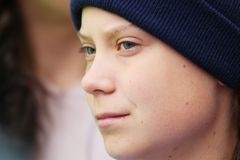