Of these things my 5-year-old is certain: She misses the bus, she misses her friends, and her mom is “not a good teacher.” Here’s what is less certain: That when she returns to a real classroom this fall, it will stick.

I want kids back in school. The sooner, the better. There are major benefits for the kids themselves, for families’ overall mental health and parents’ ability to work. Alberta announced this week that it’s bringing back the province’s classes for about 750,000 K-12 students this fall. In part, I feel a sense of reprieve, and hope.

But hope can be fleeting. The government’s push to get back to “near normal” comes at a time when Alberta COVID-19 cases are ballooning. There’s criticism that the reopening plan has too few details as to how schools will function in practice, too little money for extra cleaning and doesn’t address teachers’ concerns about their safety.

While the Kenney government says it’s purposely not being prescriptive – saying it wants to give schools and boards autonomy – I worry that provincial responsibility is being downloaded to educators, and outbreaks (or concern about outbreaks) could have us back to some version of remote learning before Thanksgiving.

Alberta kids are going back to school in September, but schools are being asked to do more frequent cleaning, to plan for physical distancing, to put students in smaller groups when possible and to make hand sanitizer ever-available. There’s a requirement to fill out a daily self-screening questionnaire. The government points to studies that have found children don’t seem to get as sick from COVID-19, compared with the rest of us. And there’s evidence that younger children don’t transmit the virus as easily.

Alberta joins Quebec, Saskatchewan, Nova Scotia and New Brunswick in planning for a full-time school reopening. This stands in contrast with other school systems, which are implementing a hybrid model of online and in-person education. Notably, New York City will have most children attending school in person only two days a week. Some parents complain that this kind of hybrid system will force them to choose between their jobs and educating their children.

But concern about Alberta’s full-time plan is coming from many quarters. With no class-size limits, real physical distancing will be difficult in many cases. There are questions about whether a $120-million increase to operational funding (after a funding freeze) gives school boards the resources to properly staff, clean and disinfect.

The opposition NDP says it would cap the class size at 15, hire a new contingent of substitute teachers, staff and janitors, and spend tens of millions more on personal protective equipment. All of this would come at a steep cost, of course, at around $1-billion.

The Alberta return-to-school plan also has no requirement for mask-wearing – even for older kids or teachers. Calgary city council this week voted to implement a mandatory mask rule for indoor spaces, and Mayor Naheed Nenshi said he wants to see a “better” plan from the province. He suggested this week that if the city and province cannot come to some agreement on a mask policy for schools, the city could make its own rules for Calgary schools.

Alberta is facing a massive deficit this year and it’s understandable that the province is watching its costs. And every government on Earth is struggling with difficult decisions about how and when to return children to schools, and often whether mask-wearing should be compulsory.

But the United Conservative Party government might be getting extra pushback on its plan because it has done little to build trust with cities, teachers or school boards. Premier Jason Kenney’s laser-like focus on bolstering the energy sector in his early months in office, and even through the pandemic, often leaves other groups wanting.

That apparently includes women. RBC says the pandemic has pushed Canadian women’s participation in the labour force down to its lowest level in three decades, in part because of “ongoing uncertainties about availability of school and childcare.” But the government continues to miss out on opportunities to show it has the interests of working women in mind, as displayed by a new video on the economic relaunch that has been criticized for showing more visuals of Mr. Kenney’s RV than actual women.

When I asked the Premier in late June what his government is doing to get women back in the work force, he cited his government’s desire to get kids back in school this fall, “which of course is very important for labour-force participation for parents, particularly moms.”

Fair enough. But he went on to speak about his concern about restaurants closings, and how that could have a devastating impact for younger women who work in the hospitality sector.

I spare a thought for those working in the restaurant business every day. But it was strange, or insightful, that the Premier spoke narrowly of women working in this one field. He didn’t say anything about helping other sectors that employ women, in blue-collar or professional roles, who want to get back to work but haven’t been able to because of layoffs or a child-care dilemma.

The Alberta Premier uses every opportunity he can find to talk about the plight of energy workers – many of them unemployed men who have seen their economic prospects hindered by low prices and a larger rebuke to new oil and gas projects.

But women workers, in particular, have been ground down by the pandemic. Many of them want or need to go back to work, just as badly as men. As we look to a return to school, it’s time for women’s work to became a laser-like focus for the Premier, as well. 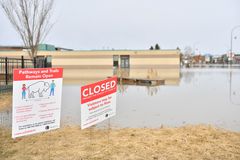 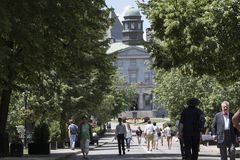