Will Dwyer manoeuvred around a string of obstacles as he hit the home stretch chasing a lifetime goal: Raising $1-million for the Terry Fox run.

The 94-year-old veteran fell and broke a wrist and two ribs this spring while he was out collecting pledges. He gave up his driver’s license about a year ago. He has prostate cancer. He can’t go door-knocking by himself anymore. He started this year’s campaign about $125,000 short of his lifetime target. He was running out of time.

“If I reach a million by the time of the run, I’ll probably start up looking for a second million," Mr. Dwyer said last week. He got there last Friday and started working on his next goal a day later. Breaking records – like breaking bones – is no reason to slow down.

“I go down to the farmers’ market every Saturday and I pick up some donations," he said.

Mr. Dwyer remembers watching Terry Fox struggle during his Marathon of Hope 39 years ago. Terry Fox wanted to raise the equivalent of one dollar for every Canadian and had covered 5,373 kilometres before he had to stop running the fall of 1980. Mr. Dwyer figured if Terry Fox could raise funds on one leg, he could do it on two.

And so he spent decades going door-to-door carrying a clipboard and driving from one town to another. He burned through dozens of pledge sheets every year. He asked everyone he came across for a donation, including members of the Fox family.

Mr. Dwyer is the Terry Fox Foundation’s most prolific fundraiser. The charity makes customized pledge sheets for him and mails his donors special notes with their tax receipts. Last year, the foundation issued 1,300 receipts for pledges Mr. Dwyer collected. That doesn’t include online donations.

The run is one of about 600 that will take place across Canada on Sunday. About 9,000 schools will host runs later this month.

Martha McClew, the foundation’s director of operations for eastern Canada, said the runs have raised about $780-million over 38 years, and the total will be about $800-million after this year.

“Cancer will be cured because of people like Will who never stop asking Canadians to give," Ms. McClew said. “We’re not asking for a million-dollar donation. Will is making this happen on $10 and $20 donations.”

Mr. Dwyer’s fundraising success is thanks to his fearlessness in asking people for money and insisting they pay up. Mr. Dwyer met Fred Fox, Terry Fox’s older brother, about a decade ago.

“The first thing he did when I met him was ask if I would sponsor him,” Fred Fox said.

The elder Fox was in for $20, but didn’t have any cash. He promised to get the money, then forgot. Mr. Dwyer didn’t.

“I bumped into him two or three years later and he reminded me I didn’t send him the money," Fred Fox said.

Alexandra Fox, Terry Fox’s niece, will celebrate in Barrie with Mr. Dwyer. Terry Fox had bone cancer as a teenager and his right leg was amputated. He kicked off his Marathon of Hope in April, 1980, by dipping his prosthetic leg in the Atlantic Ocean. Cancer in his lungs forced him to stop in September, near Thunder Bay, Ont. He died the following June at 22.

Mr. Dwyer’s mom died of cancer when he was fighting overseas during the Second World War; one of his nephews had the same type of cancer as Terry Fox and died about a year after he did; and cancer has taken two of his sons. Mr. Dwyer’s cancer has spread to his bones and lymph nodes.

Robert Dwyer, the youngest of Will Dwyer’s seven children, believes the death of his father’s nephew is partly what inspired the ambitious goal. Robert Dwyer was about 19 when his dad told him he wanted to raise $1-million.

When Will Dwyer reached $650,000, Robert Dwyer did some math and figured if his dad kept up his usual pace of raising $40,000 a year, he would need to live to 100. He needed more help. Robert Dwyer, over the past five months, has taken his dad out fundraising three or four times a week.

“He knows exactly where to go, where he can get all the pledges. He doesn’t know the addresses, but he can tell you the location and he can pinpoint the houses,” Robert Dwyer said.

And Will Dwyer is serious about raising another million.

“If the good Lord keeps me around," the nonagenarian said.

Opinion
If he saw how far the Marathon of Hope has come, Terry Fox would be smiling that smile 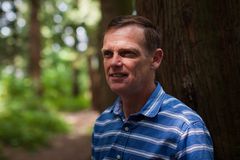 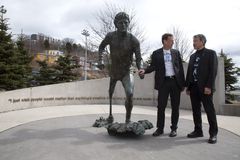 More than 130 students stung by wasps during Terry Fox run at B.C. school
Follow Carrie Tait on Twitter @CarrieTait
Report an error Editorial code of conduct
Due to technical reasons, we have temporarily removed commenting from our articles. We hope to have this fixed soon. Thank you for your patience. If you are looking to give feedback on our new site, please send it along to feedback@globeandmail.com. If you want to write a letter to the editor, please forward to letters@globeandmail.com.
Comments