Daniel Ghods-Esfahani was still grieving when he saw the envelopes arrive from medical schools across the country inviting his girlfriend, Saba Saadat, to admissions interviews.

It was a painful reminder of what could never be. The life they had dreamed of building together was no more. Ms. Saadat, a talented student and researcher at the University of Alberta, was among those killed in the crash of a Ukrainian airliner shot down over Iran on Jan. 8, 2020.

Mr. Ghods-Esfahani said he felt as though the world stopped for him that day. Over the past year, the reminders and the pain have been ever-present.

Ms. Saadat had travelled to Iran with her sister Sara, a PhD student, and her mother, Shekoufeh Choupannejad, an obstetrician from Edmonton.

The couple were aware of the tensions in the region between the U.S. and Iran, but Mr. Ghods-Esfahani assumed there would be little risk to a civilian aircraft. They texted that morning and the only concern Ms. Saadat expressed was over a slight delay before the flight’s departure. Still, he watched an online flight tracker as the plane departed. It mistakenly showed the flight charting a path away from Tehran. Satisfied that all was well, he went back to his studies.

It was only hours later that he learned that the plane, Ukraine International Airlines Flight 752, crashed shortly after takeoff.

The sorrow intensified as it became clear that the plane had not been brought down by mechanical failure, but had been fired upon by Iranian air defence. One hundred and seventy-six people perished.

There were 55 Canadians and 30 permanent residents on board, as well as dozens of Iranian students destined for Canadian university campuses. Ms. Saadat was among a large contingent connected to the University of Alberta, which lost 10 students and two faculty members. But the tragedy touched communities and universities all across the country. More than 22 schools lost students, staff or recent graduates.

A year later, institutions are still struggling to come to terms with the loss. Some students have been awarded their degrees posthumously, some have had their research presented at conferences as colleagues vowed to honour their work. In some places, physical memorials to the dead have been erected.

Although Canada and Iran don’t have diplomatic relations and there are tensions between the two over the Iranian crash investigation, postsecondary schools continue to work to ensure that links between Canada and Iranian students endure. Across the country, dozens of scholarships have been created to honour the memory of the victims.

Some of those connected to those who died have become advocates for a transparent investigation into the crash and justice for the victims.

Mr. Ghods-Esfahani, a first-year medical student, put his studies on hold last January as he struggled to come to terms with Ms. Saadat’s death.

He watched as she was awarded a posthumous degree and special recognition, along with the other victims of Flight 752, at a virtual convocation ceremony at the University of Alberta. He also saw some of her research presented at a conference. “It was just very sad, because the research was only partially completed,” he said.

Eventually, he found a galvanizing spark in a group organized to advocate on behalf of the victims families. “I’ve realized now the most important thing I can do is to contribute to this work of advocacy for justice,” Mr. Ghods-Esfahani said.

Growing up in the Iranian diaspora, he had tended to avoid politics, he said, but he cannot be silent in this case.

Arash Pourzarabi and Pouneh Gorji, master’s students studying computer science and artificial intelligence, were also among the many promising University of Alberta students who died that day. They had just been married in Iran and were planning another ceremony in Edmonton.

The university also lost two faculty members, Pedram Mousavi and Mojgan Daneshmand, married professors of engineering who were killed along with their two daughters. Colleagues said they were the kind of teachers who welcomed students into their homes and made members of their labs feel like family, particularly international students finding their feet in a new country, as they once had.

“People just loved them,” said David Turpin, University of Alberta president emeritus. Dr. Turpin visited the departments and faculties that lost people that morning. Already, counsellors were meeting with students and staff privately and in group settings when he arrived. “The grief that day was overwhelming,” Dr. Turpin said.

It was difficult to even comprehend the magnitude of the tragedy, he said. “Each one of these people, not only were they brilliant individuals, but they were remarkable human beings.”

Part of the basis for a thriving Iranian-Canadian community in Edmonton and elsewhere in the country is because of connections forged by higher education. More than 40 years ago, as Iran was convulsed by revolution, academics came to Canada, including to Edmonton, in search of stability.

“They were looking to start a new life in Canada, and they have done extraordinarily well,” Dr. Turpin said. “They sent messages back home, and more and more students came and the numbers doubled, and they doubled again, and now there are close to 500 Iranian students on the U of A campus.”

The number of international students from Iran has grown by 40 per cent over the past three years to nearly 10,000 across Canada. That growth was reflected in the large number of institutions affected by the crash – Carleton University, Dalhousie, Concordia, the University of Manitoba, the University of Victoria, McMaster, Queen’s, Guelph, Western, Waterloo, York and more. The list of universities that lost students is long and varied, with institutions large and small. Nearly all have made efforts to commemorate those students who died and to create more opportunities for other Iranian students via scholarships.

Eight members of the University of Toronto community, including six students, died on Flight 752. Among them were Mohammad Asadi Lari, a joint MD and PhD student who dreamed of being a surgeon and scientist, and his sister, Zeynab Asadi Lari, a science student planning to apply to medical school.

Saman Arfaie, a medical student at McGill and a friend of Mr. Asadi Lari, can still recall the chill that ran through his body as he looked up the flight manifest and found his friend’s name. The year since the crash has been difficult, he said. Of the students who died, at least 20 were friends of people he knows.

“What many of them wanted was hope for a better future. To see all those dreams end, and the potential lost, it was very devastating,” Mr. Arfaie said.

At the University of Windsor, a small gathering was held in November to unveil a memorial to the five local crash victims, three of them PhD candidates. The memorial consists of two trees, three benches and a plaque.

University of Windsor president Robert Gordon said the spot is significant because it’s a favourite place to walk and gather, particularly for those new to the campus and new to Canada. The site looks out over the river to the U.S. on the other side.

Dr. Gordon said he spoke with the father of victim Samira Bashiri, who told him how much it meant to the family that the university had taken such steps to remember the students. His family had been through tremendous pain, but it meant a lot that his daughter’s other family, her friends and colleagues at the university, also mourned her loss.

The students were all motivated by the opportunities ahead of them, Dr. Gordon said. One of the roles the university tries to fill is to provide those opportunities for people from around the world. So many bright futures were lost, he added.

The university also created a scholarship fund in honour of the Iranian students, which will go to an international student pursuing graduate studies in engineering or science. A Windsor engineering professor, Shervin Erfani, who came to Canada from Iran after the 1979 revolution, pledged to match donations up to $10,000.

“We lost five incredible people on that day,” Dr. Gordon said. “Our commitment is to do what we can to remember.” 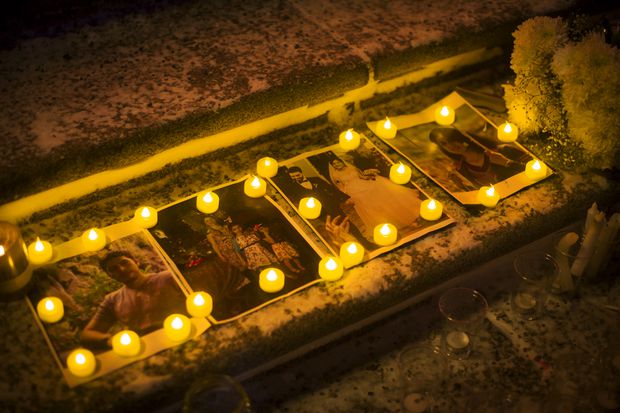 Several were students and professors returning to school after winter break. Others were dentists, doctors, newlyweds, engineers and architects. Learn about the Canadians killed in the Iran plane crash through our interactive guide.