A florist offered free flowers for mourners to leave at a memorial wall. A family gave out bottles of water to passersby. A community group organized a vigil and walk. Christians and Muslims stood together under a placard that said “Love for All, Hate for None.”

Stricken but determined not to succumb to fear, the residents of North York are coming together after Monday’s van attack. This is a remarkable community, a booming city within a city with soaring towers alongside sprawling low-rise postwar housing, broad parks and big community centres. Many outside the northern Toronto district knew little about it until a man drove a van down the sidewalks of its main artery, Yonge Street. What they are learning should amaze them.

Not very long ago, North York was nothing but farmland with a few scattered villages amid the cornfields. In the years after the Second World War, it grew into a sprawling suburb matching the others that rose up to its east and west as the city by the lake expanded inland. Now it is regarded as uptown Toronto, a major hub of North America’s fourth-largest city.

Except that uptown has its own downtown. The stretch along Yonge between Sheppard and Finch avenues that was the scene of the attack is flanked by corporate headquarters and condo buildings. Their occupants flood onto the sidewalks on nice days, as Monday was. People having lunch or going out shopping crowd Mel Lastman Square, the meeting place named after its famous long-time mayor.

Ontario’s Premier, Kathleen Wynne, who worked on this strip when she was a school trustee, said that what struck her after the tragedy was the silence. Usually, she said, the streets are so alive.

North York’s diversity, as with Toronto’s at large, is astounding. Chinese, Vietnamese, Iranians, South Asians, Jews, Italians − all getting along just fine, thank you. If you want to see the Great Canadian Experiment in action, come here. North York is full of strivers and achievers and newcomers on the make.

It doesn’t get much love from the rest of the city, much less the country. Those who live downtown often joke that they never venture north of Bloor Street, the east-west thoroughfare many city blocks and 10 subway stops south of Finch. But to many of those who live here, it’s a simply wonderful place, not just diverse but safe, pleasant and much quieter and roomier than the busy neighbourhoods in the central city. The tragedy on Yonge makes many of them want to shout: This is not us. Along with mourning their loss, they want to celebrate the virtues and strengths of their thriving community.

Grace Keji, 36, came to Toronto from war-torn South Sudan. After what she had seen back home, “It was like I was in wonderland.” She loves walking in the big park near her place off Finch. She loves spending hours in her free local library, plowing through books on everything from handicrafts to religion. She loves the variety. In North York, she marvels, even the canine population is diverse. She sees breeds, such as the Shih Tzu, that she never glimpsed growing up. She came to Yonge and Finch on Tuesday to place two roses at the memorial, one red, one white.

Lori Sperrino, 37, felt she to had to come, too. She pushed her 11-month-old twins there in a double stroller. Of course, she never expected anything like this to happen on the peaceful streets of North York. To her, it always felt like “a tiny little village” despite its size, a place where she could just stop someone on the street to ask for help if she needed it.

Her friend Marty Sokolov, 43, who belongs to the same online moms’ group, has lived in North York all her life. “It’s a beautiful community,” she says, dissolving in tears. “It’s incredibly diverse, incredibly welcoming. It’s safe.” To see something like this happen in the place she grew up − well, “it’s a hard go.”

It is hard for just about everyone. Hard to believe. Hard to absorb. Hard to endure. And yet, as they organize to recover from the trauma and memorialize the victims, people here seem resolved to rise above it, confident in the future of the place they call home.

“I think it will make us stronger,” Ms. Sokolov says, arriving at the memorial in a sweat from her afternoon run. “I hate to say that, but I think so.” 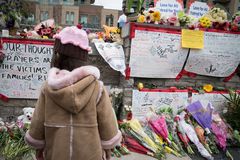 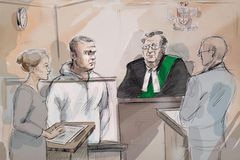 The Cop Who Didn’t Shoot responds to deadly attack with calm, discipline and determination
April 24, 2018 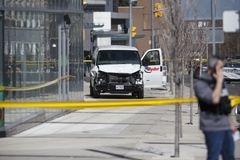