Indigenous leaders are calling for a re-examination of the Catholic Church’s commitments under the residential schools settlement agreement after a Globe and Mail investigation found billions of dollars in assets for the combined entities of the church in Canada.

The investigation used Canada Revenue Agency tax filings to determine the Catholic Church in Canada had $4.1-billion in combined net assets across 3,446 charitable Catholic organizations in 2019, and that Catholic charities had brought in $886-million in donations that year.

Despite its ample finances, the church has not paid all of what it committed to under the 2006 agreement; it collected just $3.7-million of what was supposed to be a $25-million national fundraising campaign, the proceeds of which were meant to be directed toward healing.

Garnet Angeconeb, a residential school survivor who has dedicated his life to reconciliation and anti-racism work, said he was “disgusted” by the wealth of the Catholic Church disclosed in The Globe story.

“There’s an imbalance in terms of what the Catholic Church’s overall assets are and what they were mandated to honour under the settlement agreement,” he said. “It’s a great injustice.”

Over the past several months, the discoveries of more than 1,200 unmarked graves near the sites of former residential schools have reignited a national conversation about reparations for survivors, and what the Catholic Church and governments could do to make amends.

At least 150,000 First Nations, Métis and Inuit children were taken from their families and forced to attend residential schools. These government-sponsored institutions disconnected Indigenous children from their languages, traditions and culture, in what the Truth and Reconciliation Commission called a policy of cultural genocide.

The institutions operated from the late-19th century until 1996, and roughly 60 per cent were run by the Catholic Church. The Anglicans, United Church and Presbyterians also operated residential schools, which were mostly funded by the federal government.

The settlement led to billions in payments from the federal government to residential school survivors. As part of the settlement, Catholic entities agreed to pay three forms of restitution: $29-million in cash, $25-million of church “in-kind” services, and to make their best efforts to collect $25-million in a national fundraising campaign.

After the multiyear campaign generated just $3.7-million, a 2015 decision in a Saskatchewan court case released the church from any remaining legal obligations under the settlement. In 2016, lawyers for the Catholic Church told The Globe they’d raised all the funds they could and that many churches were near bankruptcy.

In late July, The Globe e-mailed the Canadian Conference of Catholic Bishops, a national co-ordinating body, asking about the financial picture of Catholic entities and calls for greater reparations. The organization declined an interview request with their president, Archbishop Richard Gagnon. Instead, he provided a written statement that did not directly answer questions about the church’s past fundraising, or about whether the church would sell some of its assets or set aside permanent funds for reconciliation.

In a June interview, The Globe asked Archbishop Gagnon about the potential for a national fundraising campaign. At the time, he said local efforts were more appropriate, and that he couldn’t respond to a question on whether the church would contribute funds through assets or cash holdings.

Mr. Angeconeb, who in 2015 was appointed to the Order of Canada, is a vocal critic of the settlement agreement itself. He sat on the board of the Aboriginal Healing Foundation, a now-defunct national Indigenous charity that received some of the settlement payments and used them to fund healing programs in Indigenous communities.

He says a legal review of the residential schools settlement is necessary, and called on Prime Minister Justin Trudeau to organize a commission of inquiry. Not only was there a dearth of reparations from the Catholic Church, he said, but survivors fell through the cracks during the settlement process with the government.

“Finally, we are getting to the bottom of what really happened in terms of the undeliverables of the Indian Residential Schools Settlement Agreement,” he said.

Assembly of First Nations National Chief RoseAnne Archibald agreed the settlement process itself should be re-examined.

“There’s a collective harm here, not just to those individuals, but to their families, communities, nations,” she said. “The settlement doesn’t cover those kinds of larger issues.”

Ms. Archibald said the church’s part of the settlement was a “paltry amount” considering how much would be needed for healing. Ms. Archibald called on the church to meet its commitments.

“Clearly, they are a fundraising machine,” she said. “So my question to the church is, why are you stalling on providing that $25-million that was promised?”

Spokespersons for Marc Miller and Carolyn Bennett, ministers of Indigenous services and Crown-Indigenous relations, respectively, did not respond to a request for comment on Sunday.

According to Indigenous leaders and experts, reparations could take several forms beyond the individual payouts undertaken by the federal government as part of the 2006 settlement agreement.

The funds could be used to locate unmarked graves, identify the remains and repatriate them to their respective Indigenous communities. Reparations could also go to Indigenous communities, such as by funding mental-health programs or scholarships, a model that was used by the Aboriginal Healing Foundation.

Donald Worme, legal counsel for Tk’emlúps te Secwépemc on unmarked children’s graves and past president of the Indigenous Bar Association, said the church had been “continually offside” regarding their commitments under the settlement agreement.

“When they were saying that they were broke, that they could not raise money – I mean, the hypocrisy of that is astonishing,” he said.

In May, Tk’emlúps te Secwépemc announced it had found 215 unmarked graves with children’s remains near the former Kamloops Indian Residential School. But the total won’t be clear until dozens of acres of territory are searched, the expert who conducted the first scans said at a July 14 news conference.

Kamloops, once the largest of Canada’s residential schools, operated from 1890 to 1969, mostly under a Catholic order called the Oblates of Mary Immaculate. The federal government ran it as a day school for nine more years before it closed in 1978.

Mr. Worme has been working to obtain church documents regarding the former Kamloops institution. Their contents will pave the way for future conversations about reparations if those are deemed necessary, he said. “With their enormous wealth, it would be, in my estimation, an easy proposition to do the right thing.”

“We know what their financial obligation was, and we know that they never lived up to that,” he continued. “So what are they going to do about that? Is that the legacy that they wish to provide to Canadians? Is that the decidedly un-Christian behaviour that they want to be remembered by?”

The Decibel: Deciphering the church’s finances

Reporter Tom Cardoso spoke with Tamara Khandaker about how he and Tavia Grant counted up the assets of the Catholic Church in Canada. Subscribe to The Decibel for more episodes. 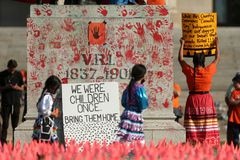 Much more ground to be searched at former residential school in Kamloops, expert says
July 15, 2021 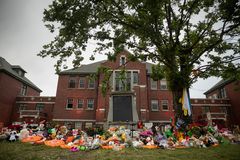 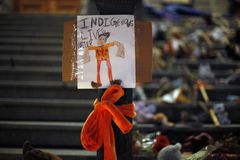