When Ontario Premier Doug Ford travelled to New York late last month to meet with U.S. business leaders, Canadian media were given less than a day’s notice about the trip. Mr. Ford brought his own TV crew: Ontario News Now.

At first glance, ONN looks like news content, raising concerns about whether the government is purposefully trying to blur the lines between partisan messaging and journalism.

It’s all paid for by taxpayers, but the costs are unknown. Because ONN operates out of PC caucus services, a fund that every caucus of 12 or more receives for administration and research, it is not subject to disclosure or freedom of information requests. The overall budget for the PCs is around $6.7-million.

The Globe and Mail has learned the top two staffers at PC caucus services – Ms. Vanstone, as director of communications, and executive director Jeff Silverstein – earn six-figure salaries, with Ms. Vanstone making at least $100,000 and Mr. Silverstein close to $150,000, according to multiple sources who spoke on condition of anonymity as they were not authorized to discuss the matter publicly.

ONN content is widely shared on social media by Mr. Ford and his cabinet, who are told by the Premier’s Office they have to participate, multiple sources said. (When asked if he is forced to do ONN videos, Economic Development Minister Todd Smith said “God no. … It’s a way to get our message out.")

“Ontario News Now is a creative way to communicate the government’s message in the modern, digital world – no different than a video press release,” Mr. Silverstein said in a statement.

Editorial: Enjoy Doug Ford’s feel-bad movie of the summer – you paid for it

Opinion: Why does Doug Ford hate the future? He’s sure trying to burn it down

Opinion: A fake guillotine leaves us wondering: Why is the press so wary of calling politicians liars?

“In total, Ontario News Now content has been viewed more than 10 million times across social media platforms – not to mention the amount of earned media that has been generated as a result of the Queen’s Park Press Gallery’s fascination with the platform.”

The medium has been criticized by opposition leaders and political watchers who say it undermines democracy by allowing the government to get around traditional media and evade critical questions.

“The problem is it blurs the partisan with the public," said Jonathan Rose, associate professor of political studies at Queen’s University. "Governments are entitled to send a partisan message, but it has to be done clearly under the party banner, and not under guise of some neutral name like Ontario News Now.”

“What the government is trying to do is make it look as though this is a legitimate outlet, and it’s not. It is a propaganda machine being paid for by public dollars," she said.

The idea was conceived on the campaign trail by Kory Teneycke, the former vice-president of Sun News who served as Mr. Ford’s campaign manager.

Mr. Teneycke said he viewed the format, which was then dubbed Ford Nation Live, as a way to use social media to stream content from events and announcements in a more appealing way.

“It’s just the reality of modern campaigning. You could get more coverage by providing your own. But it’s not really a competition with traditional news,” Mr. Teneycke said.

“The reality is that the internet has fundamentally changed the media business, and people in journalism live that every day."

He calls the idea, “One of the better things that we did during the last campaign."

While opposition parties have labelled the content as government-funded propaganda, the PCs argue it’s an innovative way to promote their policies.

“It’s essentially being used as a vanity project,” he said. “It’s a public expenditure. And it should be disclosed as such.”

Editor’s note: An earlier version of this article incorrectly said a caucus of eight or more is eligible for administration and research funding. In fact, it is 12 or more. 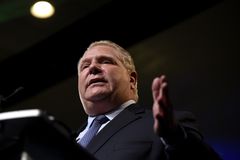 Opinion
Doug Ford’s PCs believe in free speech – and those who don’t like it can shut up
December 19, 2018 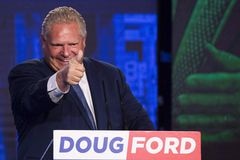