When Emily Tuck’s name was called out from the list of graduates, the corn field erupted with the sound of honking horns from hundreds of cars, minivans and pickup trucks parked in the dirt.

The memory of Ms. Tuck, 17, was honoured Friday evening by students from a rural Nova Scotia high school and their families, who gathered together in the largest drive-in graduation organized in Canada after a senior year that was disrupted by the COVID-19 pandemic and shattered by a mass shooting in April.

Ms. Tuck, given a diploma posthumously from the Cobequid Educational Centre, was killed in the shooting that claimed 22 lives, along with her parents and the father and stepmother of classmate Amelia McLeod. She was celebrated Friday night by all those who drove onto Jim Lorraine’s family farm with a tribute video and the announcement of a welding bursary and three student awards in her name.

“Being here with all of you is bittersweet,” said her aunt, Crystal Mendiuk, speaking at a podium behind a Plexiglas shield. “It’s been comforting to know she was loved and touched so many in her short lifetime.”

The teenager’s aunt and cousin addressed the crowd as a home video of Ms. Tuck’s fiddle music bounced around the field on a sound system, and was broadcast into car speakers. It was an emotional moment in an evening when more than 300 graduates in black grad caps and gowns were driven up a makeshift gravel stage, then took their turn posing for photos against a backdrop of hay bales and a blasting of car horns.

Organizers of the graduation ceremony said they wanted the students to enjoy a rite of passage for high-school students in a year when proms and conventional graduations everywhere have been cancelled. It was also a chance to remember Ms. Tuck together, which the students haven’t been able to do because of restrictions on public gatherings during the COVID-19 crisis.

With the help of hundreds of volunteers from the Truro area, they arranged a unique car-based celebration in a farmer’s field, with vehicles parked three metres apart, complete with fireworks, a live DJ and a live-stream broadcast.

Jeannine Garrett, Ms. McLeod’s mother and one of the event’s main organizers, said she hoped she could help give her grieving daughter and classmates a graduation to remember after a painful and isolating senior year.

“When she lost her dad, she said, ‘I’m going to have graduations and weddings and kids, and he’s not going to be there for any of that,‘ ” Ms. Garrett said. “I just thought, the first one is a graduation, and she might not even get that. ... I thought we’ve got to make this happen.”

In September, Ms. McLeod will begin a program at a Nova Scotia community college to become a corrections officer – just like her late father Sean McLeod and stepmom Alanna Jenkins, she said. Both parents were also honoured in a video tribute Friday night.

Mr. Lorraine, whose daughter Eryn was among the graduates, said it was important to the parents and volunteers that the teenagers had something positive on which to end their high-school careers. He wanted them to know that life always goes on – even after horrible events like mass shootings, he said.

That’s a hard lesson he’s learned as a farmer, facing lean years and the prospect of losing the family farm. You pick up the pieces and keep going, he said.

“We just wanted to show them that the community cares, that life will go on, and we’ll get through this thing together,” Mr. Lorraine said.

“My father always said there will be brighter days ahead. As you get older, and you live through some experiences, you realize it’s true. It gives you something to hold onto.”

The students, some of them in high heels and others in sneakers, said the shootings were felt deeply among their classmates, who come from a large rural catchment area, including the community of Portapique, where Ms. Tuck was killed with her parents and nine other neighbours.

“It kind of shook me, and all of us, to lose someone from our class who was at the same stage of life. It ended so abruptly,” said Mallory Priest, a co-president of the student council whose family was close to another shooting victim, Kristen Beaton.

She hasn’t seen many of her classmates since March 14 – the last day of school before the pandemic ended classes for the rest of the semester. While she knows some of them are still hurting, she hopes they could find some joy Friday night, too.

“This is a big moment in our lives, and some people are missing family members who should have been here to celebrate with them. ... I’m hoping they can find some comfort in the idea that some things can remain as close to normal as possible, given the circumstances,” Ms. Priest said.

Other graduates said they were moved by the response from the community. Excavation companies trucked in loads of gravel to build a stage, sound and broadcast equipment was donated, car dealerships loaned vehicles, restaurants gave away thousands of free meals and hundreds volunteered to direct traffic, hand out water and prepare the site.

“Every single person in the community was like, ‘I will help in any way I can.' They had to turn away volunteers,” said Clare Boudreau, the other student council co-president, who added that for a long time it looked as if a gathering of this size wouldn’t be allowed. “It’s just really inspiring to see everyone come together like this, and it’s exciting to feel like we’re having a real graduation instead of just, ‘Okay, that’s it, we’re done.‘ ”

Mr. Lorraine, the farm owner, said he’s never been so happy to see his field trampled by a sea of vehicles.

“These kids have been through a lot,” he said. “We just wanted to give them a night they’ll never forget.”

Schools across Canada forge ahead with virtual commencements, proms
June 19, 2020 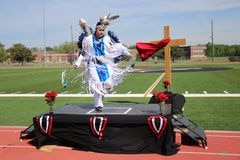 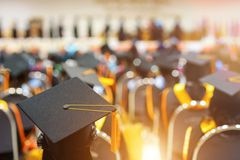 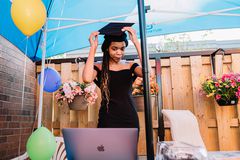