Dorothy Marshall is practising her curtsy in her Toronto living room. It is a shallow curtsy, not the deep bend a younger woman might attempt when meeting the Queen. Ms. Marshall has a “bonky knee” and she doesn’t want to overdo things, not at the age of 96.

On May 29, she will be a guest at the Queen’s garden party at Buckingham Palace. Her son Bill Marshall, a Calgary architect and my best friend since high school, put her name forward. He thought that as “an admirer and contemporary of Queen Elizabeth, a volunteer London Blitz fire watcher, a troop entertainer, a beautiful war bride and an adoring mother of six children,” she deserved a moment in the sun. Does she ever.

Ms. Marshall is part of a remarkable group of women who pulled up stakes, left home and hearth behind and crossed the cold sea to Canada: the war brides. About 48,000 women married Canadian soldiers who fought in the Second World War. The first wedding was recorded only 43 days after the Canadians started landing in Britain in December of 1939.

When the war finally ended in 1945, Canadian authorities organized a mass transport of brides, offering them free passage by ship. A war-brides website calls it “the most unusual emigrant wave to hit Canada's shores: All women, all of the same generation, and mostly British.”

Now, like the war veterans, their numbers are dwindling. Even a woman who married at 18 in 1945 would be 91 today. Most married earlier and older. So not many are in shape to traverse the Atlantic to eat cake on the palace lawn.

Ms. Marshall is willing and more than able. She turns 97 in August, but has the kind of pep that makes people at dinner say, “I’ll have what she’s having.” She swims at the pool in her St. Clair Avenue condo. She goes to yoga, even if it’s the kind where you use a chair. She flies to Florida with her daughter and visits Bill at his cabin in southern Alberta.

She is revved up for the trip to England, which will include a high tea at the Savoy Hotel and a car trip to Devon and Cornwall. She has already picked out her dress for the party. She is bringing a pair of kid-leather gloves that she has stored for years in a plastic bag. She was a little shocked when she looked at pictures of garden parties from other years. “Do you know some of the women didn’t even have a hat?”

She isn’t sure she will get to meet the Queen face to face. The monarch holds four garden parties a year, with 30,000 guests in all. But in case she does meet her, her doctor is giving her a little shot of cortisone for that knee.

Ms. Marshall was born Dorothy Elizabeth Firth in Renfrew, Scotland. Her father, who was from Belfast, worked in the Glasgow shipyards. War found her in bomb-blasted London. She carried a gas mask and a bucket of sand as a member of the auxiliary fire service, with its “dreadful uniform” of blue serge. A German bomb hit a zoo near her workplace outside the capital, leaving dead penguins strewn about. A group of friends from her tennis club put on morale-raising performances for the troops. One woman did a sinuous dance. Ms. Marshall sang and told jokes.

She met George Marshall, a decorated tank commander from Toronto, at a party for officers. He spied her by the fireplace and said, “That’s the girl I’m going to marry.” Bombs started falling outside so everyone stayed over, sleeping on the floor. They married in 1944 and spent their wedding night at the Savoy. Mr. Marshall was dispatched to Belgium and Holland after D-Day and got into “some pretty nasty scraps.” A sniper’s near miss left a neat hole in his beret.

Ms. Marshall took ship for Canada on Sept. 13, 1946, piling on to the Queen Mary in Southampton with other war brides, her infant son Craig in her arms. It was her father’s birthday. “I was going off to a new land,” she recalls. “He was devastated. I was the only daughter he had.” Mr. Marshall met her at Toronto’s vaulted Union Station.

Her husband became a leading insurance executive. They raised their family of four daughters and two sons in North Toronto, settling in a solid house on Inglewood Drive in Moore Park filled with laughter and chatter. Quite a few war brides never got used to Canada or the wrenching separation from family. Some fled for home. Ms. Marshall embraced her new life. Her attitude was: “I was born over there and now I am a Canadian.” She took the bad with the good, somehow weathering even the death in a car accident of first-born Craig, a strong young man full of promise. “You just go on, and I go on – and I’m still here.” 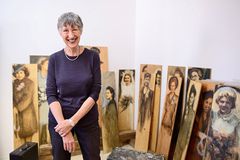