A group of academics is joining the chorus of those calling for a criminal investigation into the marketing practices of Canadian opioid manufacturers.

The seven academics in medicine, law and political science from the University of Toronto, Dalhousie University, York University and the University of British Columbia note that Purdue Pharma L.P., the maker of OxyContin, has already pleaded guilty to illegally marketing opioids in the United States.

“The same long-acting opioids that fuelled the opioid crisis in the U.S. are marketed in Canada, and Canadian prescribing rates for these medications accelerated with the Canadian opioid-related death rate,” the letter states.

“It would be very surprising if Canada was spared the inappropriate marketing practices that admittedly took place in the United States.”

Others who have called for such an investigation include NDP MP Don Davies and former Ontario Health Minister Eric Hoskins.

In the United States, Purdue and three of its executives paid US$634.5-million in 2007 to settle criminal and civil charges against them for misleading the public about the drug’s risk of addiction.

From 1996 to 2001, the number of deaths related to oxycodone, the generic version of OxyContin, increased five-fold nationwide while the annual number of OxyContin prescriptions increased nearly 20-fold, according to a report by the U.S. Drug Enforcement Administration.

In Canada, which is the world’s second-highest per capita consumer of opioids after the U.S., OxyContin was the top-selling long-acting opioid for more than a decade.

Purdue’s Canadian operation has made no similar admission of wrongdoing and continues to emphasize that it promotes and markets its products in line with the Health Canada-approved product monograph and the Pharmaceutical Advertising Advisory Board code.

Canadian victims have attempted to seek justice on their own, filing a class-action lawsuit against the company that led to a proposed $20-million settlement, with $2-million going to the provinces and territories and no admission of guilt.

Health Canada has repeatedly declined to make someone available for an interview on the matter but said in a statement it is “committed to ensuring that information in a health-product advertisement is not false, misleading or deceptive.”

Signatory Nav Persaud, a family physician and researcher at St. Michael’s Hospital in Toronto and an assistant professor at the University of Toronto, said a criminal investigation would show that the Canadian government takes the issue seriously.

“Even an unsuccessful prosecution would send the message that the Canadian criminal justice system takes note of these things,” he said. “The alternative is to say to every pharmaceutical company: No matter what you do, no matter if you’re convicted in another country, no matter if 10,000 Canadians die, you will not be investigated in this country.” 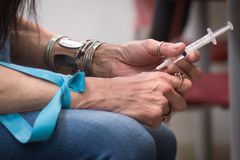