Jeff Fleming spent 13 years in a job where most people don’t last one.

As a service and support worker at the Downtown Mission in Windsor – ground zero for the opioid crisis in the industrial city of 218,000 – he worked the nightshift at the shelter, helping clients struggling with mental health and addictions.

Mr. Fleming was open with his colleagues about his own experience with addiction, and they say that made him better at his job. He treated every guest with dignity and respect – even making a special trip before each shift of his shifts to guide a client who struggles with alcoholism over from the mission’s day program facility a few blocks away, to make sure the man didn’t fall on his way to the shelter.

Mr. Fleming, 45, was one of four people who died in a 24-hour period in Windsor last weekend of a suspected drug overdose. Toxicology results are pending. All of them were men, ranging in age from their 20s to their 50s. The deaths were spread out across the city, and police do not believe there were any links between them – or that the victims were even necessarily using the same drugs.

Investigations are ongoing, and many questions remain unanswered, specifically whether fentanyl, a powerful opioid, was to blame. But the rash of deaths has highlighted Windsor’s struggle to bring frontline workers and officials together to address an opioid crisis that has wreaked havoc across the country.


Ron Dunn learned the news from Mr. Fleming’s mother on Sunday. As the executive director of the Downtown Mission, he needed to inform his staff before they got to work, where he knew a lineup would already be forming as temperatures hovered around zero.

Kayla Nuzum, 20, a security guard at the Mission, was crushed when the news reached her. She’d grown close to Mr. Fleming over the last few months and admired the way he engaged with even their most difficult guests.

In her time on the job, she has been verbally abused, had knives pulled on her and been punched.

“It takes a very strong kind of person to not let this work get to you,” she said. “But he was here 13 years. It’s amazing.”

Matt Johnson, a fellow support worker, had seen news coverage about the spike in overdose deaths. It never occurred to him it could be a colleague.

As someone who also has struggled with addiction, Mr. Johnson, 42, said Mr. Fleming’s death came as a jolting reality check. When he arrived at the centre that afternoon, he took a moment with his coworkers to huddle together and brace for the tough week ahead.

“Then we got back on the horse, because there were 80 people here who need to eat,” he said. “There’s no time to take your foot off the gas.”

For Mr. Dunn, telling the clients was even more heart-wrenching.

“I had to explain it to all these people in a parking lot waiting to come in,” Mr. Dunn said. “I had to tell them that the person that they go to for help, [he] himself needed it. And didn’t get it.”


Dubbed the automotive capital of Canada, Windsor has long had higher than average rates of pharmaceutical drug use – though local authorities say their bigger problem is actually crystal meth.

Last year, 36 people died of opioid-related causes across Windsor Essex County (a rate of 8.7 for every 100,000 people), according to the local health unit. In the first three months of this year, there were eight deaths. Toronto’s rate last year, by comparison, was 10.4. Hamilton’s was 15.4. Thunder Bay’s was 20.1.

Windsor’s needs are numerous but not unique, and as a result, local organizations such as the Downtown Mission say they are often overlooked by the provincial and federal governments when it comes to funding. And in a city desperate for resources, four deaths in one weekend marks a worrying trend for those on the front lines – one Mr. Dunn says nobody is prepared for.

Though an application was submitted for a temporary sanctioned overdose prevention site, the province informed the city recently that Windsor will not be one of the 21 communities getting one.

The public health department has a feasibility study underway to gauge the community’s support for a permanent supervised consumption site, but Ms. Kaffer is not confident that residents will rally behind it.

Though Windsor Regional Hospital’s CEO has called on the province to declare a public health emergency, Ms. Kaffer said their own city has yet to recognize this as a public health crisis.


As the death toll rises, Mr. Dunn is concerned that Windsor’s police chief still refuses to equip his frontline officers with naloxone, an opioid antidote that can reverse the effects of an overdose.

The antidote has been widely embraced by police services across Ontario – particularly after the province passed legislation that will exempt officers from being investigated in cases where they administer the antidote to someone who does not survive.

But Chief Al Frederick said they should leave that to their more-than-capable medical experts.

“I think there’s too much downloading on the police and this is one more aspect of that,” he said. “We can’t rely on the police to do everything.”

“It’s beyond logic to me, how a man who has dedicated his life to serving and protecting people, can at the end of his career say ‘that’s not my job,’” Mr. Dunn said. “It’s not his job, but it’s the right thing to do.”

At the Mission, he said the need is growing out of control. Their kitchen – which is designed to feed 100 people a day – feeds 900, he says. Their shelter overflow beds are always full. They have a food bank, a crisis call line and a fitness program – all of which are funded primarily through donations.

“I’ve said this before, and I mean it, it’s not a soundbite: Those deaths are on us. Every time I lose one of our guests, that’s my failure...and that’s the failure of our mayor, and the failure of our social service agencies and our community as a whole,” Mr. Dunn said.

“People are dying and they don’t have to.” 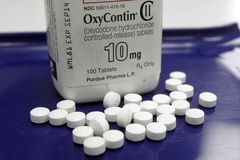 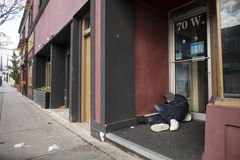