Carla Garrett answered honestly whenever her young son Xavier asked her about death. But over time, their conversations became more difficult as the topic shifted from what happens when people die to what would happen when he, specifically, died.

She struggled to find the right words to comfort her sweet-tempered little boy, who had an incurable form of brain cancer.

“I felt so helpless,” said Garrett of Woodstock, Ont., noting she sought out books for help and found plenty of children’s titles about parents’ enduring love and about death, in general. “But there was nothing that I could find that said what I wanted to say.”

Six months after Xavier died in May 2017, at age 7, Garrett began putting her sentiments into writing. The result is an illustrated children’s book, published last year, titled My Love Will Follow You There, aimed at helping other parents say goodbye and allay their dying child’s fears. The book will now be offered as part of a new project, called the Comfort Cart, at McMaster Children’s Hospital in Hamilton, Ont., created for families with children at the end of life.

To write the book, she consulted various counsellors, therapists and social workers, to make sure she had the right language. Her husband, Mark, who is a photographer, created the illustrations, using images of Xavier’s twin sister Mackenzie, now 10.

Meant for parents to read aloud, the book offers reassurance, while validating the feelings their child may have.

“There might be some fear or worry. Or maybe sadness. Or joy,” she wrote. “Whatever it is, I will hold your hand as you go and my love will follow you there.”

Along with free copies of Garrett’s book, the Hamilton project delivers an assortment of helpful items on portable carts to patients’ bedsides, from extra-soft tissues, phone chargers and speakers for playing soft music to handouts about planning a child’s funeral and materials for making legacy items, such as plaster moulds of a child’s hand.

When it comes to preparing a child for death, every family has its own approach, said Cindy van Halderen, clinical specialist of the hospital’s quality of life and advanced care program.

“That [conversation] is a parent-child heart-to-heart like no other, but it’s paralyzingly scary,” she said.

Some parents fear that having preparatory discussions with their children may scare them, or lead them to give up hope and accelerate death, van Halderen said. Yet, at the same time, they also don’t want children who know they are dying to feel they cannot talk about it, nor do parents want to show they aren’t brave enough to confront the subject, she said.

While a social work and palliative-care team can help coach and role-play with parents to help them prepare for these discussions, “there are no scripts to this,” van Halderen said, adding the approach must be tailored, according to the age of the child and the beliefs of the family. (In Garrett’s case, she spoke with Xavier about heaven, reflecting the family’s Christian faith.)

Xavier, who was diagnosed with anaplastic ependymoma at eight months old, knew from a young age that dying was a possibility, Garrett said. He had four brain operations over the years, but further surgery was deemed too dangerous.

Although Xavier made statements, such as, “Mom, I’m not going to get better,” Garrett said she and her husband clung on to the idea that he might recover. “At that point, we were still trying, hoping some miracle would happen,” she said, adding they were also concerned with caring for Xavier’s sister, Mackenzie.

The family found support from various resources, including therapy, health-care professionals and other parents who had either been through or were facing the death of a child. Among the greatest advice Garrett received, she said, was from another parent, who raised the importance of giving a child permission to die – that is, to recognize when the child’s life is coming to an end, discuss with the child that they are dying and to reassure them that they can let go.

For Garrett, this moment came when Xavier, who lost much of his mobility and was losing his ability to speak and swallow, lay on the floor one day, unable to get up on his own. He refused help. For 20 minutes, he lay there crying.

Garrett waited for him to calm down.

“I sat him on the couch, and … explained that we’d miss him – so much. But that it was okay and we would be okay,” she said.

While she spoke, Xavier was very quiet.

“I knew he understood. Even though he didn’t necessarily respond, I think his just being quiet told me that that’s what he wanted to hear,” she said.

Garrett said she began writing the book after the initial pain of losing him.

“If you see me cry, which I know that you will, don’t worry,” she wrote, ending with the following lines: “Feel the warmth in your body and my hand still in yours. Now walk into Heaven, home you must go, to be the angel I always knew that you were.” 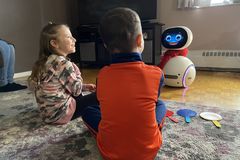