A van full of Christmas trees and decorations is expected to arrive this week in this tiny Alaskan fishing village just over the border from Yukon, an effort to help bring some holiday cheer to residents displaced in hotel rooms. The annual Santa Claus parade this past weekend was another effort at distraction.

A massive landslide Dec. 2 buried four homes and wiped out roads in Haines, leaving a debris field measuring some two football fields across. David Simmons, 30, and Jenae Larson, 23, are presumed to have died.

Haines was battered by what meteorologists are calling a 200- to 500-year storm. The community was buried under 150-centimetres of snow, followed by 25 centimetres of rain over two days. Houses flooded, others were knocked off their foundations, or filled with mud and sand, and some slopes surrounding the hamlet remain unstable. Many are still evacuated.

“It’s not safe enough to let them back into their houses at this time,” said Haines Borough Mayor Doug Olerud. Even in cases where geologists have determined it’s safe for families to return home, not everybody has.

“When you’re told you have to evacuate your house because a landslide might come down on top of it, it takes a little bit before everybody is comfortable going back into that house,” he said.

The fishing village with about 2,500 residents sits at the mouth the Chilkat River valley, surrounded by snowy peaks popular with heli-skiers. Every fall, the world’s largest congregation of bald eagles descends on Haines, with as many as 4,000 of the screeching raptors gathering in the Chilkat Bald Eagle Preserve to squabble over spawning salmon carcasses alongside gorging grizzly bears.

A mecca for neighbouring sea-starved Yukoners and wildlife enthusiasts from around the world, Haines also lures its share of timber and mining interests, including Canada’s Constantine Metal Resources. The Vancouver-based company has set its sights on a copper-and-zinc-rich sulphide deposit just upstream from the eagle preserve – a mine location many locals fear may irreparably alter this salmon-rich watershed and hurt the eagles, bears and people that depend on it.

Constantine’s promise of jobs and its investment in Haines formed a rift in the community, widened by COVID-19 restrictions.

“Haines definitely has a reputation for some sharper, energized, hot-button issues like mining, timber and mask-wearing,” said Mr. Olerud.

But the landslide has dissipated the conflict.

“We have a long history that when bad things happen in our community, people rally together and help each other,” said Mr. Olerud. “The bigger the heartache, the bigger the turnout.”

Not that long ago the Chilkat Valley was covered by glaciers, said Lynn Canal Conservation executive director Jessica Platcha.

“So unless you’re on bedrock, you could be on unconsolidated soil,” she said. “Places where we didn’t worry about the slope, we are now realizing are very vulnerable.”

The rain was so heavy it felt “abusive,” she added. “You couldn’t see through it.”

Ms. Platcha’s house leaked, her family’s heavy-duty rain gear didn’t keep them dry, and they were cut off from Haines by multiple slides.

“You can’t separate this event from climate change,” she said. “We know extreme weather events are more severe and more frequent around the world and I was wondering when our number would come.”

While it was cold and mostly clear in Haines on Sunday, more wet weather is in the forecast.

“I can’t help knowing that this extreme weather event, as deadly and as tragic as it is, will likely come again in our increasingly destabilized climate,” said Ms. Platcha.

Many in Haines whose houses have been cut off by the deadliest slide remain unsure when, or if, they will be able to return.

Power was still out, and homeowners were worried about marauding bears tearing into freezers full of rotting food. Local tourism operator Joe Ordonez saw fresh bear tracks in the snow over the weekend.

“There is this thrill of living near the mountains and feeling like you’re in this isolated wilderness, but when the same mountains start to feel threatening, it really changes,” he said.

“Being so isolated, it was always nice to at least have the option to jump in our car and drive up to the Yukon. The weather is more stable there, because you’re not right on the coast, and there is something really nice about our Canadian neighbours – it was a friendly open door.”

But that door has been closed since the onset of the pandemic.

Meanwhile, residents looked for some normalcy. Santa Claus sat on top of the Haines fire truck during Saturday’s parade, as he does every year, but the mood was somber.

Family and friends of the two slide victims walked behind Santa, and the watching crowds joined the march. At the harbour, candles were lit and Mr. Simmons’ father spoke of small miracles. Mr. Simmons’ girlfriend had been away when their house was swept into the ocean, and while family and friends combed the beaches, little was found except pulverized blue insulation.

A local fisherman had offered to take the family and Mr. Simmons’ girlfriend out in his boat, to scour more inaccessible shores.

On a rocky stretch of beach, she found one of only five special Christmas ornaments that they’d hung on their tree. 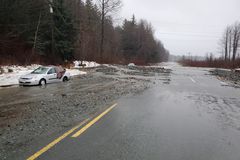 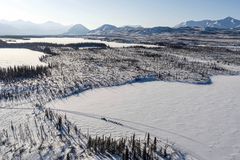 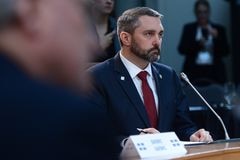