“It’s my first class back and it feels so good, even though I feel a little out of shape,” Ms. Higgins, a skin-care consultant and makeup artist in Calgary, said after being put through the paces at Functional 45.

“It’s a damn good sweat,” she said with a laugh.

Having spent most of the pandemic doing home workouts, Ms. Higgens said Alberta’s latest relaxation of the rules is amazing.

“It means everything. It means that there’s hope that this whole entire pandemic is going to be behind us.”

It came on Thursday, the same day as Alberta expanded eligibility for second doses to about 650,000 people who received their first dose in April and reported its lowest active case count of COVID-19 since October.

Alberta health officials reported 170 new cases of COVID-19 and three new deaths on Friday. They said 296 people are in hospital with the virus and, of those, 79 are in intensive care.

The province said there were 3,529 active cases. Since the pandemic began, 2,265 people have died of COVID-19.

“We’re here because Albertans have done their part,” he said. “You have chosen to protect not only yourself and those around you, but really to protect our whole province.

The province’s second stage of reopening required 60 per cent of those 12 and older to have had at least one vaccine shot and fewer than 500 infected patients in hospitals.

Functional 45′s owner, Martin Venneri, said eased public-health orders are important because the fitness industry has been totally shut down for eight of the past 15 months.

“Not only have we been looking forward to this day but our members have as well,” he said.

“This is our fifth full class of the day and we still have three remaining classes. Everyone’s excited. There’s a lot of smiles and a lot of laughs.”

Fitness centres are open for solo and drop-in activities, while indoor classes are okay with three-metre distancing. Entertainment venues, including movie theatres, casinos and museums, are being allowed to operate at one-third capacity.

Restaurants can seat up to six diners at a table inside as well as on patios. Private social gatherings outdoors can have up to 20 people.

The doors were open again at Calgary’s PZA Parlour, which has been surviving with takeout and deliveries.

“It’s a sign of better days ahead,” general manager Ricardo Albino said. “Plus the news that maybe by the end of this month we might be able to go back to the way things were before ... that’s very exciting.”

He said indoor dining accounted for 70 per cent of his business before the pandemic.

“When you have in-house dining, things go further. There are drinks, oh, let’s have dessert – it’s a huge amount of business,” Mr. Albino said.

“I think we’re going to be busier than ever when we’re allowed to go back to the way we were before the pandemic.”

Hair salons, which had been open only for customers with appointments, can also take walk-in customers again.

“Our industry is a lot reliant on walk-in traffic,” said Wendy Belanger, owner of Influence Salon in Calgary.

“There’s a lot of businesses in the beauty industry where people are deciding last minute that they’re going to get something done,” she said. “That’s where their bread and butter would come from – and all of a sudden you can’t.”

There are no longer any restrictions on youth and adult sports.

And up to 150 people are being allowed at public outdoor events such as festivals and concerts. Grandstands for sports and other entertainment can open at one-third capacity.

At a Cineplex theatre on the north side of Edmonton, pouring rain didn’t stop several people from catching an afternoon movie.

Jesse Langevin took his seven-year-old son, London, for a surprise show. As soon as the boy walked through the front doors, he turned to his dad and said he had forgotten what popcorn smelled like and that he hoped they were there to see Godzilla vs. Kong.

“We were waiting for things to open up and now that they are, we’re excited to make more plans for the summer,” Mr. Langevin added.

West of the theatre, the parking lot outside the River Cree Resort and Casino was nearly full as a stream of masked patrons asked luck to give them a chance. Bells and whistles sounded from slot machines as their levers thudded up and down.

“There will be a good seven to 8,000 people that come through the gates, if not more,” said CEO Vik Mahajan, adding he expects up to 10,000 people to show up on the weekend.

“I can’t explain how excited I am.” 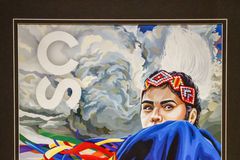 Alberta businesses gear up for next stage of provincial reopening plan amid concerns of Delta variant
June 9, 2021 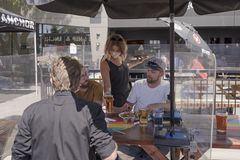 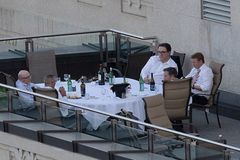