Nicole Nouch was tired of feeling helpless. Dr. Selma Scott was sick of telling patients she couldn’t help them if they didn’t have a high enough income. And Tara Wood wanted to do whatever she could to help break the stigma.

So they joined the ranks of women fighting for fertility funding across Canada. On the one hand, their stories are incredibly inspiring. I admire their dedication to the cause despite countless obstacles thrown their way. But on the other hand, their experiences are tinged with frustration over the unfairness of how infertility is treated in this country. It’s a feeling I am well familiar with.

I’m Melissa Stasiuk, head of programming at The Globe and Mail, and I recently wrote about my own “fertility journey” and the patchwork of care I discovered along the way.

In Canada, 1 in 6 couples struggle with infertility. Yet health care coverage for what the World Health Organization defines as a disease of the reproductive system depends on where you live. For many infertile couples, coverage can mean the difference between getting help or not. One round of IVF, considered in many cases the best chance for couples to have a baby, costs tens of thousands of dollars.

Yet Ontario is the only province that has a funded IVF program. Hopes were dashed earlier this week when Quebec did not announce a funded IVF program in its budget, as many had expected. Though a program is still expected to come later this year, thousands of couples are left waiting. The fight continues.

In B.C., Nouch took up the fight in 2015 by co-founding the advocacy group IVF4BC after her own struggles with infertility. “This gave me a bit of purpose and made me feel like I was doing something about it,” she says.

She went on a media blitz to raise awareness, organized a round table with doctors and launched letter-writing campaigns to MLAs. When that didn’t result in action, she didn’t give up. Instead, she got into politics, representing the BC Women’s Liberal Commission in her riding. She is aiming to put through a policy resolution on IVF funding and have it discussed at the party convention in the fall.

“Families are the backbone of our communities and we need to support them and support them to grow. That’s why I keep doing this," Nouch says. "I know how hard it was for me and now that I have my daughter, I can’t imagine money coming in the way of those feelings I have for her and the love I have for her.”

With Nouch leading the charge, I am hopeful that B.C. will listen to the plight of these families and offer the help they deserve.

It’s hard to have the same kind of optimism for Alberta, a province with finances badly shaken by the downturn in the oil industry. It makes the efforts of Scott, a fertility doctor in Calgary, all the more impressive.

Scott has been fighting for IVF funding since 1984, leading lobbying efforts for decades. “Our aim was to allow everyone an opportunity to at least try. Not everyone was going to get pregnant but they should have the ability to try. And it shouldn’t be based solely on what your financial background looks like,” she says.

The province came agonizingly close to launching a funded IVF program in 2015, when the NDP government asked fertility clinics to come up with a proposal of how it would work. But once the bottom of the oil patch fell out, all traction was lost. The province hasn’t really recovered, and neither did momentum for the program.

Scott thinks provinces may start looking to IVF to help boost low population growth, like governments in some countries around the world have. “That may be the answer. That’s my hope.” And I hope she is right.

Though Ontario is well ahead of other provinces, the fight is not over. Wood, a board member for patient advocacy group Conceivable Dreams since 2016, says the group will target their efforts this year on better coverage for fertility drugs, which run $5,000 or more for one round of IVF. She keeps in contact with the fertility advocacy groups in B.C. and Quebec to share resources and best practices – anything that will help them in their mission.

“We do this work as volunteers. … That’s why more hands make for lighter work.” (Conceivable Dreams is currently recruiting volunteers, including board members.)

For Wood, who went through two rounds of IVF herself, the fight for awareness is the most important part. “We need more people having conversations about infertility because it affects so many people today. Helping to break the stigma and make it less of a taboo topic is so helpful.”

I am due in April and so grateful for the tireless work of Wood, Nouch, Scott and others. The battle for fertility funding helped my husband and I realize our dream of starting a family. My heart breaks for couples across the country who won’t get the same chance simply because they can’t afford it. But I have faith that the women fighting for us will prevail.

It’s hard to think of anything these days other than COVID-19. As a pregnant woman, I’m trying not to panic, especially when people constantly ask me how worried I am. This Q&A from The Globe’s Andre Picard is a handy resource that sticks to the facts and brought me some reassurance as the number of new coronavirus cases ticks up.

Opinion
IVF was my last hope to have a baby. All Canadians deserve that hope, too
May 12, 2021 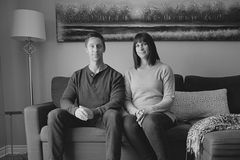 Follow Melissa Stasiuk on Twitter @Melissa_Stasiuk
Report an error Editorial code of conduct
Due to technical reasons, we have temporarily removed commenting from our articles. We hope to have this fixed soon. Thank you for your patience. If you are looking to give feedback on our new site, please send it along to feedback@globeandmail.com. If you want to write a letter to the editor, please forward to letters@globeandmail.com.
Comments