Ontario’s top court has upheld a rare conviction against a police officer for killing a member of the public in the line of duty, calling Toronto police Constable James Forcillo lucky to have been found guilty of attempted murder, rather than second-degree murder.

The officer shot a distressed 18-year-old who had a knife and was alone on a streetcar in 2013 − leaving a civic memory strong enough to prompt widespread comparisons last week to the non-violent arrest of the suspect in the deadly van attack on Yonge Street. The court ruling sent a message that police officers are entitled to no special treatment when they use excessive force.

“Quite simply, an attempted murderer is, if caught and convicted, a ‘lucky murderer,’” the Ontario Court of Appeal said in its 3-0 ruling, quoting from Antonio Lamer, a former chief justice of the Supreme Court of Canada. “This truism has particular resonance in this case. A confluence of circumstances spared the appellant from a murder conviction and a mandatory life sentence.” Chief Justice George Strathy, Justice David Doherty and Justice Gary Trotter heard the appeal. The authorship was given as “the Court.”

Only a handful of Canadian police officers have been found guilty in the past 20 years after using deadly force.

The court upheld the six-year prison sentence given by the trial judge, and rejected the defence argument that the mandatory minimum of five years for attempted murder with a restricted firearm should be ruled unconstitutional because Parliament intended it for criminals and gangsters, not police officers. And it said that while Constable Forcillo, who was 30 at the time of the shooting, is a married father of two and a good family man with no criminal record, he had offered “not even an expression of remorse.”

It added that the second set of shots, fired while Mr. Yatim lay on his back with his knife still in his hands, had no justification: “He knew that he was not entitled to kill Mr. Yatim in these circumstances, yet he proceeded to fire six additional rounds fixed with that lethal intent.”

Constable Forcillo’s lawyers argued it was nonsensical for a jury to find he was justified in killing Mr. Yatim, but criminally responsible for trying to kill the youth just seconds later. They said they had been able to find no other such case in the Commonwealth as a precedent. Michael Lacy, one of Constable Forcillo’s lawyers, said in an interview there were some difficult legal issues and the defence will consider whether to ask the Supreme Court to hear an appeal.

Julian Falconer, who is representing Mr. Yatim’s family in a civil case against the Toronto Police Service, said the ruling “sends a clear message that there aren’t different rules for the police versus the rest of us in this country.” Mr. Yatim’s mother, Sahar Bahadi, declined to be interviewed.

“In my view, Sammy Yatim did not represent an imminent threat, even before the first volley of bullets,” he said in an interview. “I don’t lose any sleep over laying the second-degree-murder charge against Forcillo.”

He said that, in the actions of Constable Forcillo, and of Constable Ken Lam, who arrested Alek Minassian after the attack on Yonge Street without firing a shot, “We really are seeing two ends of the spectrum in what we expect of our police officers.”

Constable Forcillo, who is suspended without pay, now faces a disciplinary process that could lead to his dismissal, a police spokeswoman said. He is charged with two counts of discreditable conduct and one of unlawful or unnecessary force. He has been in jail since November, when he was found to have violated his bail conditions.

After the Yatim shooting, former Supreme Court justice Frank Iacobucci investigated the local police service’s use of lethal force. Some commentators credit the improved training he recommended for the outcome of the arrest in the van attack.

Constable Forcillo argued that he honestly believed Mr. Yatim was coming at him after the first volley of shots, although the video showed he was wrong. The defence called a psychologist who said that high-danger situations cause stress that can alter perceptions. But the trial judge said Constable Forcillo had acted contrary to his training, and the appeal court said that was a reasonable finding, based on the facts of the case. 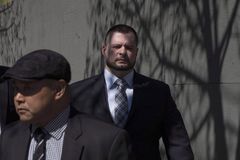 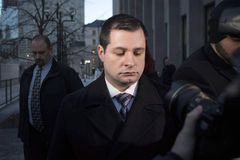