A Saskatchewan farmer who was convicted of killing his severely disabled daughter nearly 25 years ago is applying for either a new trial or a pardon.

Gratl alleges a miscarriage of justice in his client’s case. He says that although Latimer no longer faces restrictive parole conditions, his life sentence means he lives under the permanent threat of having his parole revoked.

Latimer’s daughter, Tracy, had cerebral palsy following oxygen deprivation at birth. She was 12 in October 1993 when her father killed her by piping exhaust fumes into the cab of his truck.

Latimer appealed after he was convicted of second-degree murder in 1994 and the Supreme Court of Canada ordered a new trial due to jury interference. He was convicted again and eventually sentenced to life in prison with no parole for 10 years.

He was granted day parole in February 2008 and full parole in November 2010.

His exhausted all of his appeals, his new application is two-pronged.

The first asks for a ministerial review of his case on the grounds that a miscarriage of justice occurred. It evokes the same section of the Criminal Code used by wrongfully convicted individuals such as David Milgaard. If the minister is satisfied, a new trial could be ordered or the case could be sent back to the Appeal Court for a hearing.

The second argument uses the royal prerogative of mercy, which allows for a pardon to be granted in rare cases where humanity and compassion override the normal administration of justice. Latimer’s application cites a pardon granted in 2012 to a group of Alberta farmers who were charged with violating what was then the Canadian Wheat Board Act by exporting their own grain.

The basis for Latimer’s application centres on the pain management options the Latimers felt they had for Tracy. Court heard that the girl was in severe pain after several surgeries and that the Latimers believed the only medication they could give her was regular Tylenol.

Doctors testified that putting Tracy on powerful drugs required to control her pain could be dangerous or even fatal.

Gratl argues the use of more powerful drugs, or “palliative sedation,” was a legal option but the Latimers were not allowed to make that decision.

“Robert Latimer is a victim of medical malpractice. If Tracy had received the medical treatment to which she was lawfully entitled, her father would never have intervened.”

The Canadian Association for Community Living called on the government on Thursday to reject the application.

It noted that the Supreme Court highlighted how Tracy enjoyed music, bonfires, being with her family and the circus.

“A suggestion that Mr. Latimer had no option but to murder his daughter has already been soundly rejected by the Supreme Court,” the association said in a news release.

“A pardon for Mr. Latimer would be a direct injustice to Tracy and her legacy and perpetuate society’s stigmatization against persons who have disabilities.”

Parole Board of Canada grants Robert Latimer right to travel outside country
March 3, 2015 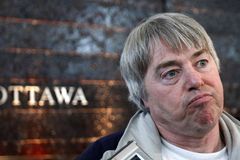