Black smoke and flames billowed from the Montreal headquarters of Le Devoir earlier this week, as workers at the daily newspaper fled a four-alarm blaze. If anyone was looking for a visual metaphor of the perils facing francophone media in Quebec, here it was.

Many of the economic and social forces putting pressure on Le Devoir, La Presse and other French-language outlets are the same as in the rest of Canada and North America. The great difference is that in Quebec, the preservation of a robust francophone media environment is seen as a matter of cultural survival.

Francophone Quebeckers are accustomed to scanning the horizon for threats to their language and culture, which may be why both the media and political classes in the province have been quick to respond with ambitious possible solutions. La Presse was one of the first to invest heavily in a tablet edition, led all Canadian papers in its conversion to online-only publication and this month became the first major daily in the country to announce a proposed transformation into a not-for-profit enterprise.

Power Corp., the Quebec conglomerate that has owned the paper for half a century, plans to contribute $50-million to the new entity and to retain responsibility for La Presse’s pension obligations. Power Corp. president André Desmarais, discussing this unheard-of corporate largesse, said a fully functioning daily press “is a very important part of our identity.” He wasn’t talking about corporate identity. He was sounding a note of cultural alarm that doesn’t register the same way in Vancouver or Toronto as it does in Montreal and Quebec City.

La Presse’s bold moves so far haven’t secured its future and the latest may not either. Le Devoir’s less flashy pursuit of a subscription-driven model may be more promising, at a time when Google and Facebook hog 80 per cent of online ad revenues. Editor Brian Myles said this week that 70 per cent of the paper’s revenue now comes from readers. He expects that figure to rise to 80 per cent by 2020. Le Devoir raised $600,000 in donations last year and has received financial help from Les Amis du Devoir for more than a century. If the future of journalism involves quitting the advertising business, tradition-minded Le Devoir is starting to look like a paper of tomorrow.

The crushing effects of Facebook, Google, Amazon and Netflix on the Canadian cultural space were predicted with great urgency in Quebec, before and after Heritage Minister Mélanie Joly began introducing Netflix as her new best friend. Quebec is actively legislating supports for the province’s information media and a tax on Netflix, while Ottawa still ponders approaches and objectives. Quebec also made interest-free loans totalling more than $10.5-million to Le Devoir and Groupe Capitales Médias. That kind of support is more controversial and probably less sustainable than giving newspapers access to charitable funds, which leaves it to members of the public to decide what to give and to whom.

In a different cultural space, last week, Radio-Canada, the National Film Board, Groupe V Média and TV5 Québec Canada launched a joint plan to add 700 hours of francophone programming to ICI Tou.tv Extra, Radio-Canada’s online subscription service for movies and TV series. The aim is to increase the service’s credibility as a francophone alternative to Netflix, which has few French-language offerings.

Again, this isn’t just a business plan, but a cultural survival strategy. Thirty-one per cent of Quebec franchophones subscribe to Netflix, a figure that rises to 55 per cent among viewers of ages 18 to 34. The fear is that a growing migration of viewers to an anglophone service based in the United States will eventually destroy the francophone televisual space and its related production industry.

When Le Devoir was driven from its building this week by fire, its staff moved to ad hoc locations and continued producing Tuesday’s paper, which arrived on my doorstep as usual. Mr. Myles chose to see in that remarkable feat a metaphor for the future. “Each time in our history we have been brought to our knees,” he said, “we have risen up stronger.” We’ll see if that summary of the past is also a prediction of things to come.

Five questions with André Desmarais on making La Presse a not-for-profit
May 11, 2018 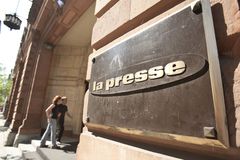 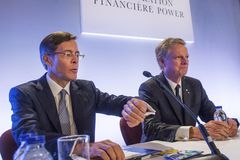