Popp said Friday night Ray still hasn’t informed the CFL club about his football future. The 39-year-old quarterback suffered a season-ending neck injury in a 41-7 home loss to the Calgary Stampeders on June 23.

Popp said he last spoke with Ray in late January prior to the start of CFL free agency Feb. 12 and nothing was decided on whether Ray would embark on a 17th season in Canada.

“I had a thorough conversation with him,” Popp said prior to the Argos’ town hall meeting with fans and season-ticket subscribers. “Corey (Chamblin, Argos head coach) did and it was just left there.”

Following Toronto’s 4-14 season, Ray said for the second straight year he’d have to think long and hard on his football future. After the ’16 campaign, Ray opted to return to the Argos and flourished under then head coach Marc Trestman.

He started 17 games and passed for 5,546 yards with 28 TDs and 11 interceptions in leading Toronto to a Grey Cup title, Ray’s CFL record fourth as a starter.

But last season, Toronto never recovered from the loss of Ray, losing nine of its final 10 regular-season games.

Popp went hard after Calgary starter Bo Levi Mitchell to open free agency before the star quarterback opted to remain with the Stampeders. The Argos have installed James Franklin, Ray’s backup last season, as their starter.

After losing out on Mitchell, Popp said the Argos were looking for a veteran quarterback who could still not only play but also serve as a mentor for the 27-year-old Franklin. He mentioned longtime B.C. Lions pivot Travis Lulay as someone who could fill that role but Lulay announced his retirement last week.

The club opted to sign Canadian QB Brandon Bridge, 26, to a one-year deal.

Popp did say there’d definitely be a role for Ray, who became a free agent in February and remains unsigned, with the Argos if he decides he wants to continue playing.

“I think we’d have to discuss what that role is,” he said. “If he were to play or continue playing then I think he’d be open for about anything we’d have a discussion with.

“Again, I don’t know what all he has planned but if he wanted to transition into a football career outside of playing, that might be a way he did it whether it’s with us or somebody. I don’t know, he’s the only one that could tell that.”

And Popp said he’s certainly leaving the door open to Ray resuming his career with Toronto if that’s what he wants.

“We’d love to have him back,” Popp said. “He’s just a tremendous, respected person in the room not just as a person but as a leader when he is on the field. He’d be tremendous help and teacher to anybody if he were playing a different role but it’s all hypothetical.

“From our end, we don’t expect anything, like last year we had no idea whether he’d come back and didn’t expect that. As an organization you’ve got to move forward until you know for certain.”

“If he’s not going to play, as it is with anybody, whether you’re a football player or any career, that’s when you’ve got to be clear, ‘This is what I want to do, I’m done,’” Popp said. “And obviously for him not to have announced something then you’ve got to assume that’s not quite there yet.” 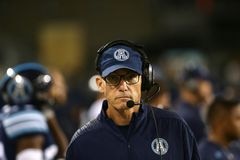 Argos GM says Bo Levi Mitchell 'left a lot of money on the table’ to stay in Calgary
February 13, 2019 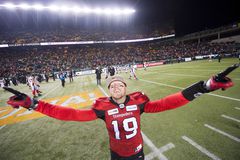