When the openly gay frontman of a hugely popular Lebanese pop group strutted onto the stage of a Cairo summer festival in 2017, rainbow flags lifted in the air, and something sparked inside Sarah Hegazi.

As a lesbian in a country where homosexuality is taboo, and gay people are routinely persecuted by the authorities, here was a glimmer of freedom. Beaming with joy, she raised both hands in the air and hoisted her own rainbow flag aloft. A friend captured the moment on camera.

It was the start of her undoing.

A storm of public outrage over the rainbow flags erupted on social media and was whipped up by Egypt’s thunderous TV talk-show hosts. Police raids followed. Dozens of people were arrested, including Ms. Hegazi – the start of a desperate trajectory, marked with violence, despair and exile, that culminated in tragedy on Saturday when the 30-year-old Egyptian took her life in Canada.

In a short, poignant handwritten note, she begged forgiveness for her action from her three siblings, and her friends. “The experience has been harsh and I’m too weak to resist,” she wrote.

She saved her final words for her persecutors.

“To the world,” she wrote. “You’ve been greatly cruel, but I forgive.”

Repression in Egypt often blurs into the abstraction of numbers – the tens of thousands of political opponents who languish in President Abdel-Fattah el-Sissi’s prisons; the hundreds who vanished into detention centres; countless others who have been harassed or forced into exile for what they wrote, said or believed.

Sometimes, though, one case cuts through.

In recent days, Ms. Hegazi’s final words have reverberated across Egypt amid an outpouring of grief. On social media, many replaced their profiles with rainbow flags, shattered by the loss of another young Egyptian.

At the other end of the spectrum, others denounced her actions and said she deserved her death.

To supporters, it was another senseless death akin to that of Shady Habash, a 24-year-old video producer who had been jailed for making a pop video that criticized Mr. el-Sissi, and who perished in a maximum-security prison in murky circumstances last month.

Although homosexuality is not technically illegal in Egypt, gay people are subjected to deep-rooted societal prejudices and are frequently prosecuted by the police under laws that criminalize “debauchery.” Undercover police investigators use aliases to roam popular dating apps to entrap and arrest gay men. Others are arrested from cafés or the streets on the basis of their appearance.

Concerts are also a focus of law enforcement.

Even before she attended the event headlined by the Lebanese band Mashrou’ Leila in 2017, Ms. Hegazi’s life had undergone dramatic shifts. She had shed the head-covering veil that she had once worn and had begun to embrace her identity as a gay woman.

At the concert she felt liberated, she told the German broadcaster Deutsche Welle, because “I was declaring myself in a society that hates all that is different from the norm.”

Ahmed Alaa, a law student who also waved a flag, later called the experience “the most beautiful five minutes of my life.”

But once the photo of her waving a flag went viral on social media, Ms. Hegazi was inundated by hate-filled comments, including death threats, said Mostafa Fouad, her lawyer and friend.

Popular television hosts amplified the mood: “How can the homosexual’s flag be raised over Egypt’s pure land?” one said. Another, Ahmed Moussa, denounced “this debauchery, this shame, this crime.”

Days later, armed security officials arrived at Ms. Hegazi’s home and took her to a detention centre run by the National Security Agency, a feared arm of Mr. el-Sissi’s security apparatus. Officers questioned her religious beliefs and asked if she was a virgin.

She was blindfolded and taken to a foul-smelling interrogation room where she could hear people groaning with pain. A piece of cloth was stuffed into her mouth. She was tortured with electric shocks, she later said in interviews.

An interrogator challenged her to prove that homosexuality was not a disease. “One time he likened communism to homosexuality,” she wrote in an article for Mada Masr, an independent news media outlet. “Another time he sarcastically asked why homosexuals don’t sleep with children or animals.”

Later, Ms. Hegazi was taken to a police station where she was charged with “inciting debauchery.” In her cell, other female prisoners, encouraged by the police, molested her, she said.

She was transferred to Qanatir prison, north of Cairo, and placed in solitary confinement. Outside, the harshest crackdown in years against Egypt’s gay community was under way.

At least 75 people were charged with debauchery in raids conducted in the days after the concert, said Lobna Darwish, a gender-rights researcher at the Cairo-based Egyptian Initiative for Personal Rights. Dozens were convicted and sentenced to one to six years in jail.

She was fired from her job as a software developer and was rejected by some family members. Months later, fearing she might be detained again, she fled to Canada, where she was granted political asylum. Mr. Alaa, the law student, joined her there.

Although Mr. el-Sissi’s government was responsible for her persecution, Ms. Hegazi blamed the entire society, including his Islamist enemies such as the Muslim Brotherhood and ultraconservative groups.

There was a rare moment of optimism for Egypt’s gay and transgender communities last month when Hisham Salim, a famous actor, revealed that his 26-year-old daughter had transitioned to become a son, Noor.

Two days later, father and son were interviewed on television together, discussing their hardship but also sharing laughs and affectionate gestures. “I always suspected this,” said Mr. Selim, 62.

The groundbreaking interview was hailed as watershed moment for transgender Egyptians, stoking hopes of greater acceptance in a society where they often suffer virulent prejudice.

But the police continued with a crackdown on gay people, even during the coronavirus lockdown. At least 17 people have been arrested so far this year, said Ms. Darwish, the researcher, some by officers using dating apps.

Another source of danger is the medical profession, she added. Some psychiatrists prescribe discredited forms of therapy in an effort to “cure” people of their homosexuality, she said. In one recent case, a psychiatric institution tried to induce that effect by administering electric shocks to a man while showing him gay pornography.

She was devastated by the death of her mother, who died from cancer soon after her daughter reached Canada, and Hegazi felt helpless to be unable to return to Egypt to be with her siblings.

Haunted by her ordeal in Egypt, she said she suffered anxiety and panic attacks. She began to stutter. “I try to avoid talking about prison,” she wrote. “I lose the ability to leave my room.”

“She never got past her mother’s death,” said Mr. Fouad, her lawyer. “She couldn’t find like-minded friends. She was angry about everything that had been done to her. She wanted so badly to come back but she was afraid she would be arrested.”

Twice before, she had attempted suicide.

Since her death on Saturday, some reaction has suggested that not much has changed in Egypt since she left two years ago. “This is what atheism does to a person,” read one comment on the website of the Youm7 newspaper. “You become selfish, you commit homosexuality and adultery, and then kill yourself. Chaos in the name of freedom.”

But for many others, Ms. Hegazi’s words rang louder.

Among the tributes paid to her on Monday was a short performance by Hamed Sinno, the lead singer of Mashrou’ Leila. On Instagram, he posted a photo of Ms. Hegazi smiling as she gripped a pair of tickets for his concert, then he sang a couplet Ms. Hegazi posted before her death:

The sky is more beautiful than the earth.

And I want the sky, not the earth.

Lebanon protesters call on government to resign amid crisis
June 13, 2020 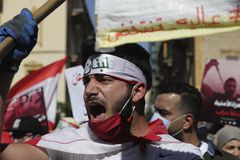 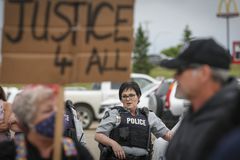 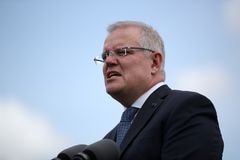