As the Parole Board of Canada prepares to consider the supervised release of serial killer Allan Legere, some who lived through his terrifying rampage 31 years ago warn he can never be rehabilitated.

The convicted murderer, rapist and arsonist, who will turn 73 in February, is scheduled for a parole hearing on Wednesday in Edmonton.

Dubbed the “Monster of the Miramichi,” Mr. Legere escaped from custody on May 3, 1989, and carried out four brutal murders, several arsons, and a sexual assault before being recaptured on Nov. 24 that year.

In 2015, Mr. Legere waived his right to a parole hearing that had been tentatively scheduled to take place, after a high-profile letter writing campaign from the community opposing his release.

However, under the law governing the board, inmates are entitled to request another review of their case every two years after their first parole review date.

Prisoners such as Mr. Legere who have received life sentences can be refused parole by the board and have no mandatory release date.

Journalist and author Rick MacLean, who co-authored Terror: Murder and Panic in New Brunswick said the memories of the violence committed by Mr. Legere are like “scar tissue” on the community’s psyche.

Mr. MacLean, who was the editor of The Miramichi Leader at the time of the killings, has documented how people started sleeping with guns under their beds as the murders continued. The writer says after he wrote about the murder rampage and trial, he received threats of legal action from Mr. Legere.

“Do I believe I’m in potential danger if he can get somewhere close to me? The answer is ‘Yes’,” Mr. MacLean said in an interview on Friday.

“I never expected there would be any serious consideration of him being allowed out on any kind of parole, ever.”

The journalism instructor at Holland College in Prince Edward Island said his research led him to conclude Mr. Legere is among a small subset of psychopathic serial killers who can construct stories to manipulate others to believe they’ve changed.

“They’re not people who get better. They can sit in wait for years. If he’s physically capable of doing what he did in 1989, he will do it again.”

In an interview with CTV in 2020, John Harris, a former manager at the New Brunswick prison that once incarcerated Mr. Legere, recalled being stunned when the murderer admitted he had been observing him from a wooded area as the corrections manager played golf.

“He had a list of people he was going to go after. That list still exists somewhere, and there are still names on it,” Mr. Harris told the television network.

“If he were to get out today and be on the loose, those people would know who they are.”

Originally sentenced to life for the murder of convenience store owner John Glendenning in June, 1986, Mr. Legere was incarcerated at the maximum security prison in Renous, N.B. He escaped during a medical visit to Moncton, undoing his shackles and fleeing his guards.

Mr. Legere commandeered a vehicle and found his way back to Miramichi, hiding in the forests and stealing food to survive as a massive police manhunt attempted to locate him.

During his months on the loose, he killed Annie Flam, an elderly store owner; Donna and Linda Daughney, two middle-aged sisters, setting fire to their home before leaving; and Rev. James Smith, a Roman Catholic priest.

He was recaptured on Nov. 24, 1989, after a failed carjacking that began in Saint John, N.B., and came to an end just outside Rogersville, where police arrested him in the cab of a tractor-trailer.

Some of the first use of DNA evidence was employed in the November, 1991, trial, leading to Mr. Legere’s conviction for the murders.

Donald Glendenning, the brother of 1986 murder victim John Glendenning, said he hopes the board takes note of the violence that occurred after Mr. Legere managed to escape.

“The parole board has a responsibility to ensure the community is protected,” he said in an interview on Monday.

Adam Lordon, the current mayor of Miramichi, said his council has again written letters to the parole board urging it to reject Mr. Legere’s application.

The 36-year-old says he was just a small boy, but he remembers his family moving from a rural part of the community to live with his mother’s parents, as a precaution during Mr. Legere’s rampage.

Mr. Lordon has spoken to family members of his victims and he said they remain traumatized by the murders. “What they’ve experienced doesn’t go away,” he said. “There is still a fear out there in the community.”

The board examines the inmate’s past criminal history, the treatments they received and the “insights” they have gained, she wrote.

In addition, board members consider the inmate’s behaviour in prison, along with their release plan, their supports in the community and how any risks are to be managed.

Victims of Mr. Legere’s crimes can submit statements about the offender for the board’s consideration, and the offender has the right to waive or postpone a hearing, even at the final minute.

Ms. Vargas said in making a decision, “the safety of the public and the protection of the community are first and foremost considerations.” 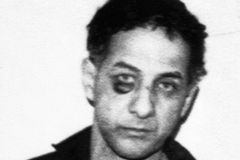