A strange thing happened at Angus Capstick’s novelty store in Sydney, N.S., last year. Cape Bretoners started buying the provincial flag en masse, so much so that he couldn’t keep them in stock.

“We sold in excess of 1,500 of them in six weeks,” said Mr. Capstick, who has owned his store for more than 30 years. “I had three suppliers run out of Nova Scotia flags.”

In independent-minded Cape Breton, where people consider themselves islanders first, Nova Scotians second, it was a rare show of unity with the rest of the province. Before the pandemic, the mass shooting in Portapique in April, 2020, and the fatal crash of a helicopter from the Halifax-based HMCS Fredericton, his customers were far more likely to fly the green and white flag of Cape Breton.

But as Nova Scotians head to the polls for a provincial election on Aug. 17, the unity felt across the province for much of the pandemic may be fading as old regional and urban-rural divisions begin to show themselves again. In Cape Breton, the declining population, economic challenges and hospital closings are once more getting attention, and they are reviving resentment of the government in Halifax.

Some political observers say that could pose challenges for new Premier Iain Rankin, hoping to win a third consecutive majority government for the Liberals.

“There are divides within Nova Scotia. There isn’t a universal sense in this province that we are on the move and that growth has been equitable,” said Tom Urbaniak, a professor of political science at Cape Breton University. “Halifax and its commuter towns are booming, but many parts of the province aren’t experiencing that.”

In the Halifax capital region, a flourishing economy, real estate frenzy and influx of newcomers is fuelling growing optimism for the future. But in places such as Glace Bay, a former Cape Breton coal-mining town where the population continues to shrink, parents worry about how to keep their children from leaving for opportunities elsewhere. Child poverty remains a pervasive problem and a youth addiction crisis is overwhelming social-service providers.

“There are concerns here about whether some communities can even survive,” Dr. Urbaniak said.

Nova Scotia’s opposition parties have tried to tap into those worries, in all corners of the province. The Progressive Conservatives are focusing on anger over hospital cuts, long emergency-room waits, ambulance shortages and the challenge of finding family doctors in rural areas. The NDP is pitching a platform around affordable-housing shortages, fixing nursing homes and the need for more mental-health services.

In a recent election debate, PC Leader Tim Houston and NDP Leader Gary Burrill criticized the Premier for failing to deal with a chronic physician shortage that has left almost 70,000 Nova Scotians without a family doctor, and said the province’s nurses were burning out and quitting. Both clearly view shortcomings in health care as the Liberals’ Achilles heel.

The Liberals are pledging $131-million in new money for health care, but are trying to keep the focus on the economy, selling the vision of Nova Scotia as an emerging postpandemic powerhouse fuelled by remote workers, green energy projects and tech entrepreneurs.

At dissolution, the Liberals held 24 of 51 seats, followed by the Progressive Conservatives with 17. The New Democrats had five seats, and there were three Independents and two vacancies.

“I think the Liberals are going to play to people’s optimism, over the handling of COVID, the economy and the idea this is an emerging time for Nova Scotia,” said Wayne MacKay, a professor emeritus of law at Dalhousie University.

“On the other side, they’re going to say, ‘We’re an aging population, we have all these health issues, and the record there is not very good at all.’ ”

The Liberals are leading in the polls, however, and the election appears to be theirs to lose, he said. Mr. Rankin’s admission several weeks ago that he was charged twice as a young man with impaired driving doesn’t appear to have hurt the party’s standing, Dr. MacKay said.

Nova Scotia drew praise for its handling of COVID-19, keeping cases low while allowing the economy to reopen more quickly than other provinces, but voters are looking beyond the pandemic in this election to what comes next, Dr. MacKay said. The Liberals appear most vulnerable in regions outside of the Halifax area, which has been a party stronghold, particularly in rural communities where hospital cuts are most pronounced, he said.

“I think most Nova Scotians do feel we’ve done pretty well,” he said. “But I think the focus now will be on the recovery after the pandemic.”

In Cape Breton, a common lament remains that the provincial government is too centralized in Halifax, and that economic policies have failed to lift the region’s chronic challenges with unemployment and poverty, problems that date back decades to the closing of multiple coal mines and Sydney’s steel mill. The Liberals have just two MLAs on the island, and one of them, Geoff MacLellan, is retiring.

“For the Liberals to have a breakthrough in Cape Breton it would really take some kind of new deal, with new policies designed to help communities with some of the worst poverty rates in Canada,” Dr. Urbaniak said. “So far, the policy priorities of government are not having a huge trickle-down effect here.” 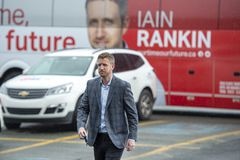 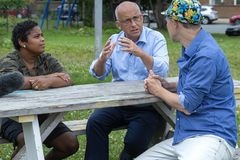