This may seem a strange way to begin an interview, but remember – this is a most curious election.

Dave Smith, a 48-year-old educational software developer who hopes to wake up June 8 as the newly elected MPP for Peterborough-Kawartha, is talking about his blood pressure, taken just last week by the family doctor.

It is his response to a question about other pressures, as he is running in one of Ontario’s most peculiar political arenas – a riding that, since 1977, has elected a member of the party that formed the government.

In their collective wisdom, the people of Peterborough-Kawartha, an urban-rural riding previously known as Peterborough, foresaw the unexpected victory of Bob Rae and the NDP in 1990, bought into the Common Sense Revolution of Mike Harris and the Conservatives in 1995, booted out Harris and put in Dalton McGuinty’s Liberals in 2003 and kept them there through three more elections (2007, 2011 and, with Kathleen Wynne as leader, 2014), even when so many others were certain earlier Conservative leaders John Tory and Tim Hudak were headed for the premier’s chair.

It is a bellwether riding, a term taken from Middle English to describe the placing of a bell over the neck of a castrated ram (“wether”) so that a shepherd might know which way the flock is moving even if he cannot see it. Most bells heard this spring, alas, have suggested alarm among voters. While Peterborough might not care to be thought of as a castrated ram, it takes great pride in being a place where the political winds tend to blow true.

That, in turn, puts enormous weight on the three candidates with any chance of victory here: Mr. Smith, the Progressive Conservative, Sean Conway of the NDP and Jeff Leal, who won the riding for the Liberals in 2003 and held it in the three following elections. 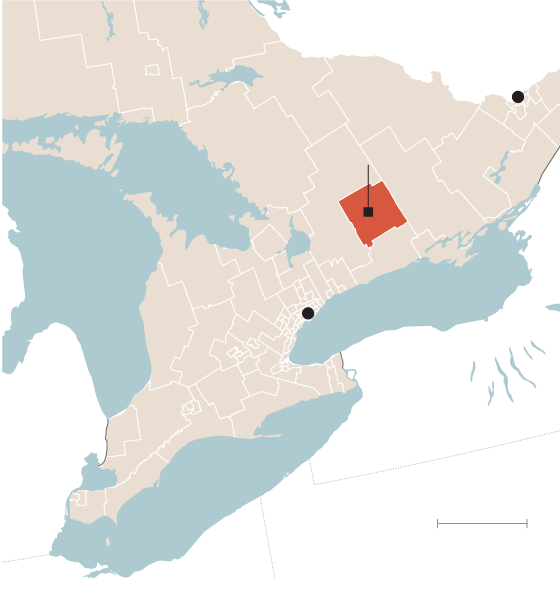 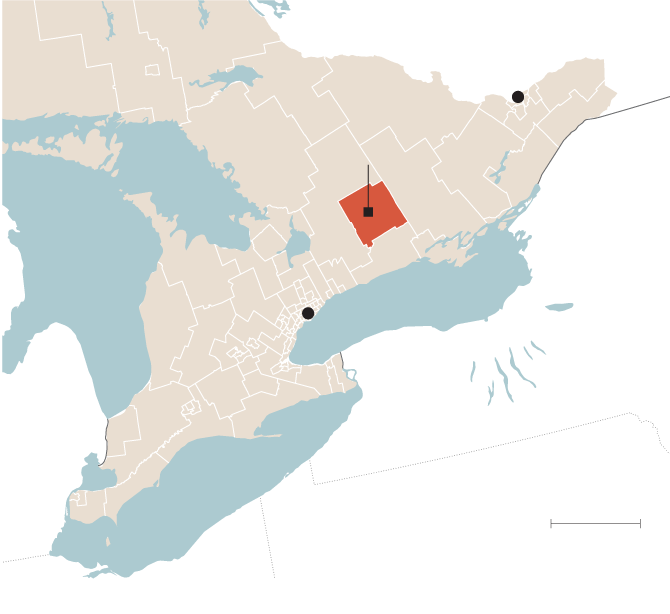 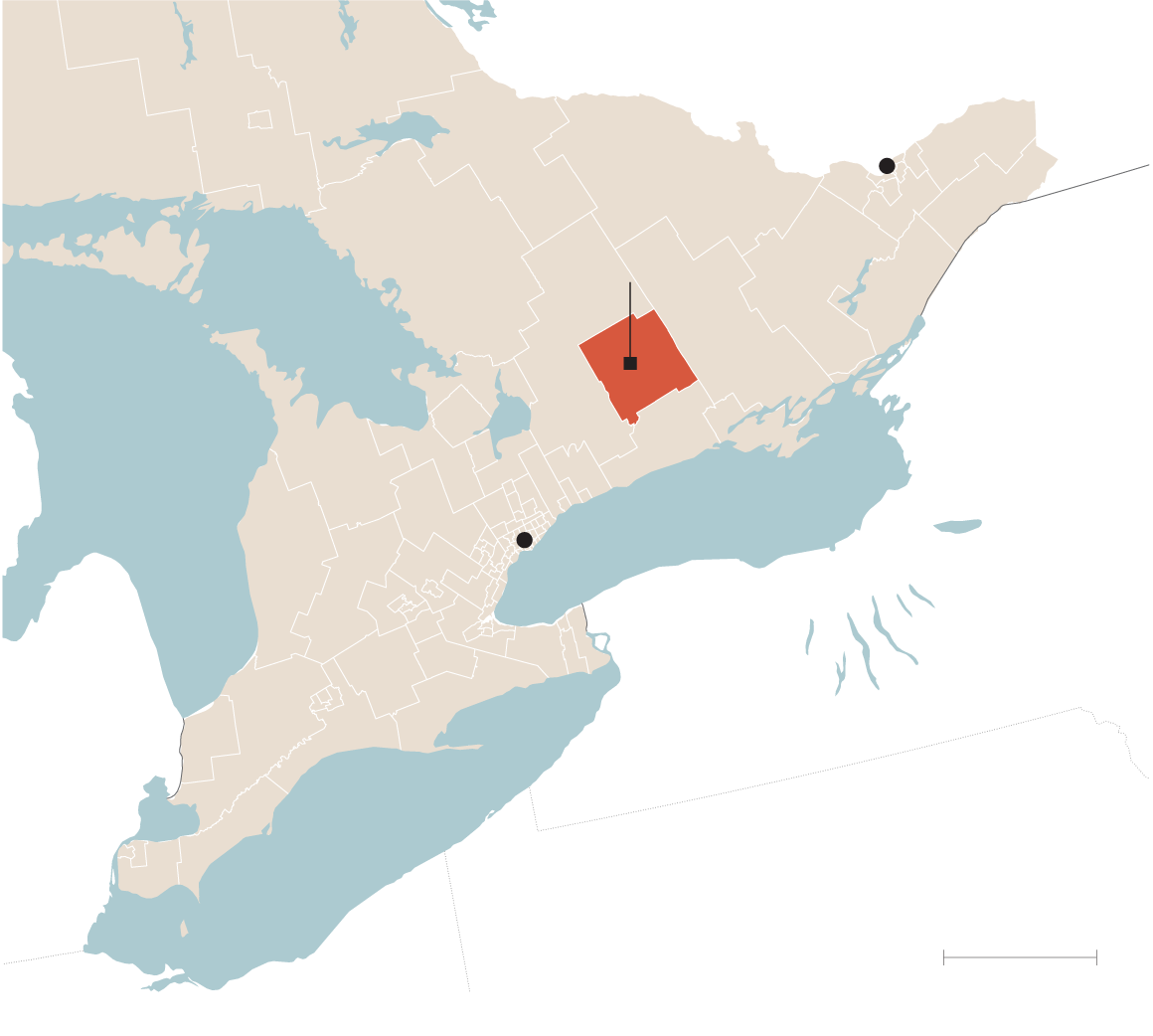 Despite his party slipping from a healthy lead in the early polls, Mr. Smith says he is not feeling the pressure and cites his systolic and diastolic numbers as proof. When the people of Peterborough-Kawartha speak, he believes, they will speak for Ontario – and he has no doubt it will be for Doug Ford and the Conservatives.

“Part of the reason this is a bellwether riding,” he says, “is you can take this area and it’s a microcosm about anything that’s going on in the province.”

What’s going on in the province, all are agreed, is a lot of anger seeking release, a reality that is interpreted as bad news for Ms. Wynne and the governing Liberals, but good news for Mr. Smith and his leader.

On Monday night, Mr. Ford came to the riding and held a rally that was packed and overflowing with mostly older voters, all very supportive and the odd one openly belligerent. One woman noticed this reporter’s “Media” badge and demanded to know if The Globe and Mail was “like CNN – all they do is lie. Only Fox News tells the truth.”

This being Canada, neither CNN nor Fox were present, so they missed the 250 or so present cheering Mr. Ford’s every line, from warnings of doom and gloom under the “radical activists of the NDP” to attacks on Ms. Wynne for everything from hydro rates to gas prices to “the worst tax ever put on” – the controversial carbon tax.

Interestingly, Mr. Ford spends far more energy attacking the NDP than the Liberals, saying businesses are so “terrified” of Andrea Horwath winning power that they will leave the province if she does. The Conservatives sense a vast shift in the works – the only question is which way will it turn.

“We’ve been out knocking on doors and we’ve been hearing a lot of the same things from people,” Mr. Smith says. “They are looking for change in Ontario. It’s a refreshing thing.”

Mr. Conway agrees that the people want change – but a quite different change. The 26-year-old musician-songwriter is running for the NDP, having won the nomination in January over only one other candidate, 17-year-old high-school student Zach Hatton.

Peterborough has not elected a New Democrat in his lifetime, but that hardly deters Mr. Conway, a Peterborough resident who also has deep roots in the nearby Ojibway community of Curve Lake First Nation. He had long volunteered for the party and sees this as “my opportunity to give back.” A number of surprising events over the past few months, all to do with the Conservative Party, has turned this into another opportunity – the chance of victory.

The young candidate says he is not “intimidated” at all by Mr. Leal’s long success in office or Mr. Smith’s and Mr. Ford’s strong populist appeal. None of them, in his opinion, is attracting the same positive support as is his leader, Ms. Horwath.

“She’s been really impressive,” he says. “She really does care about everyone.”

One local issue that Mr. Conway is particularly concerned with is safe water. Curve Lake, where his parents and other family live, is so often on a boil-water advisory. “It’s an absolute shame” that the community lacks a proper water-treatment plant, he says. “I look at policies like [the Progressive Conservatives’] ’buck-a-beer’ and I see nothing but boil-water advisories – where are your priorities?”

Mr. Leal, the Liberal candidate, not surprisingly says he hears differently at the doors he knocks on. A leisurely walk downtown with him from his campaign office suggests there might be some truth to this. He seems to know everyone and everyone knows him. He has been working these streets since 1985, when he first ran for council. He has spent more than half his 63 years in office.

When Leslie Frost was premier of Ontario throughout the 1950s, Mr. Frost claimed that he got all the political knowledge he needed from the Kent Street barbershop in nearby Lindsay. For Mr. Leal, it is the East City Coffee Shop.

Mr. Leal serves as Minister of Agriculture, Food and Rural Affairs, as well as Minister Responsible for Small Business. With 40 per cent of the riding rural, as much time is spent out and about as is spent downtown.

“The job fits my personality to a T,” Mr. Leal says . He says the area has benefited greatly from the long Liberal rule, with a new hospital, $30-million to build the Kawartha Trades & Technology Centre, a $7-million upgrade to the airport and $10-million granted to Trent University for research and facility upgrades.

Mr. Leal clearly revels in being born and raised in Peterborough. He and Karan, an elementary-school principal, have two children in university, and he says he tries to look at public policy and politics “through the eyes of kids.”

Sometimes what you see there can be worrisome, however. In the small bakery he dips into for a cup of coffee and some easy talk, there are three young people stuffed into a booth. They attend a local Bible college and are studying scripture. Mr. Leal impressively quotes some favourite lines from the large book that lies open in front of them, impressing them with his knowledge, but not necessarily his profession.

All three say they will not be voting.

“Even if we don’t vote,” 19-year-old Julia Thornton says , “we’re definitely praying for the politicians.”

Mr. Leal chuckles and bids them a good day, heading back out into the streets where he seems to have a name for every hand.

“The last chapter,” he says to no one in particular, “has not been written.”

opinion
How Ontario’s NDP is setting itself up to repeat history
May 31, 2018
opinion
As Ontario’s surprising campaign enters crunch time, how will parties adjust?
May 25, 2018
The new Andrea Horwath: Who is she and why are Ontarians listening to her now?
May 25, 2018