Large numbers of children and teenagers in pockets of Ontario haven’t been vaccinated, creating the threat of a measles outbreak similar to the ones health officials are battling in the United States.

This finding comes from a new analysis conducted by researchers at Public Health Ontario. It is the first official estimate of how many children in the province aren’t vaccinated, and provides important clues about who they are and where they live.

“We have pockets where we know we’re not anywhere near where we need to be,” said Noni MacDonald, a vaccine expert based at Dalhousie University in Halifax, who was not involved in the study.

The findings show that the percentage of students in the province with no record of receiving any vaccinations is as much as 2.9. It’s unclear whether all of those students were unvaccinated, or if some were up-to-date with their shots but hadn’t informed the local public-health unit. The study, published last week in the journal Vaccine, looked at children between the ages of 7 and 17, and was based on the 2016-17 school year. 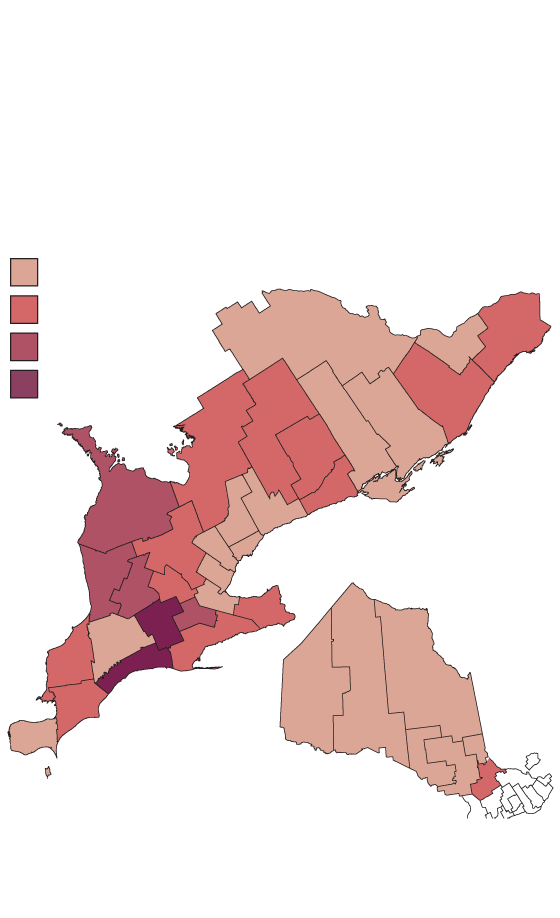 Percentage of students aged 7–17 years with

a non-medical exemption (NME) and zero 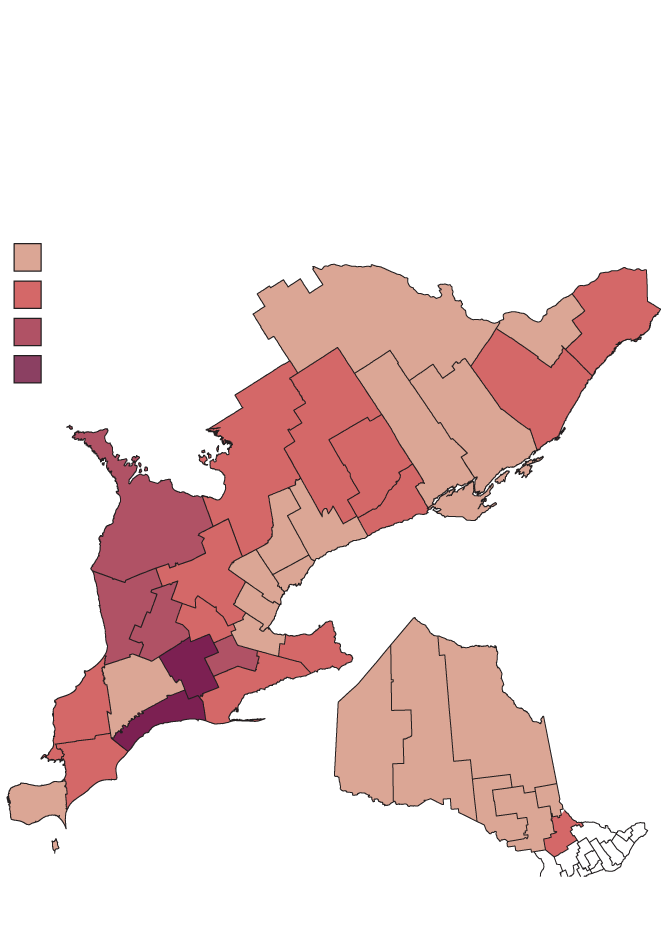 Percentage of students aged 7–17 years with a non- 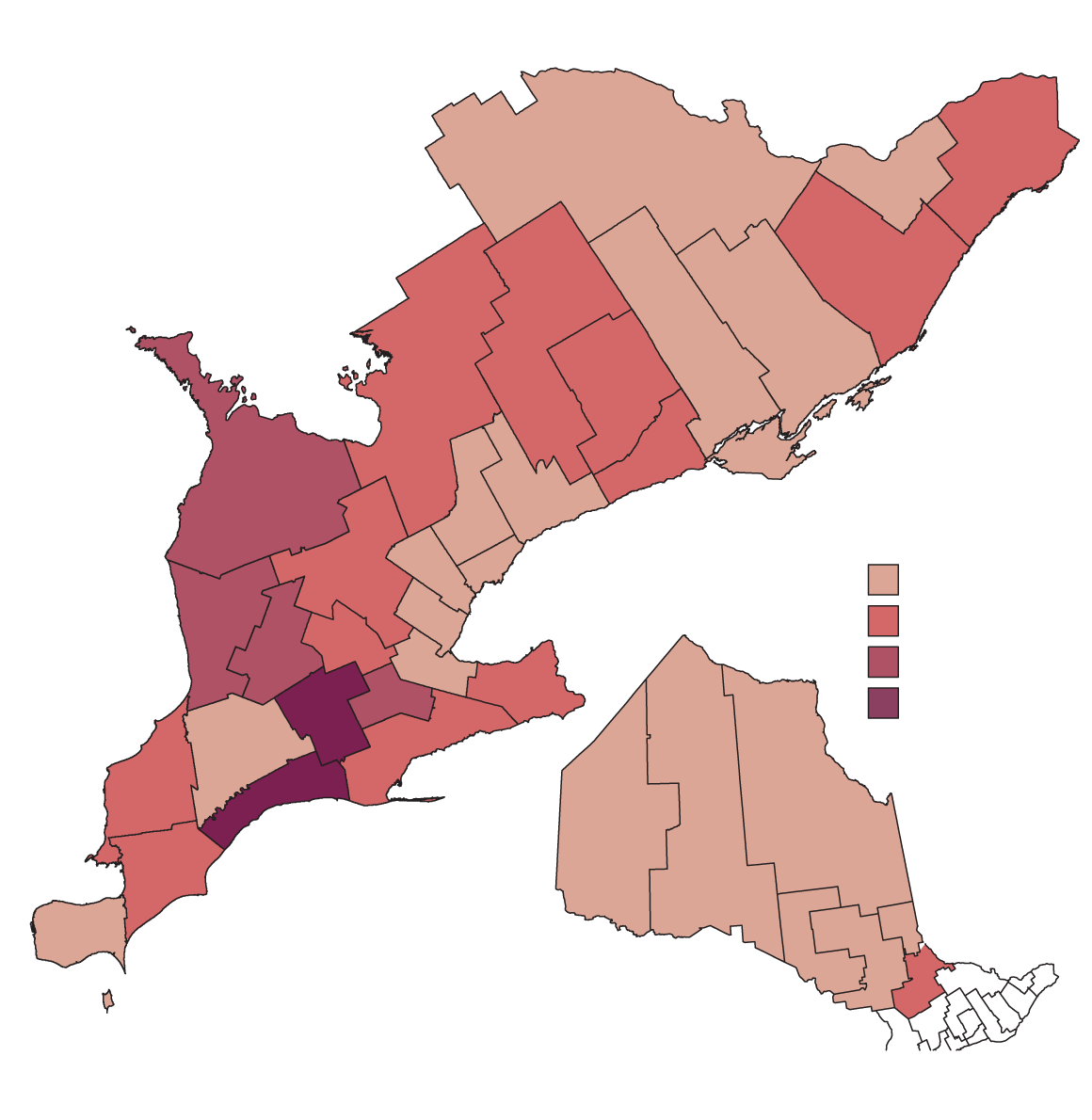 Sarah Wilson, a public-health physician at Public Health Toronto and lead author of the study, said it’s reasonable to assume that most or all of those students haven’t been vaccinated.

Those students tended to have things in common. For instance, unvaccinated children with non-medical exemptions were more likely to go to private or religious school, or be home-schooled, live in a rural area or a community with a small- to medium-sized population and be located in the southwest and central west regions.

The numbers of unvaccinated students were much higher in some parts of the province. For instance, in Oxford County, nearly 5 per cent of students were unvaccinated and had a non-medical exemption. In Elgin County, that number was 3 per cent.

Dr. MacDonald said that while the percentages may seem small, they represent tens of thousands of students across the province.

“This is not a denominator of 50 kids or 100 kids. This denominator is big … especially when they’re clustered together," she said.

Dr. Wilson said looking at these counties in more detail, such as by school or by neighbourhood, would likely reveal pockets where non-vaccination rates were even higher. And it illustrates why health officials are so concerned about the possibility of an outbreak.

“One reason why we might have been lucky [in Canada] so far is the small number of measles cases that we have seen are likely introduced into areas where there’s a high degree of immunity,” Dr. Wilson said. “Obviously, things would change if there was a case of measles getting off a plane in a community with a very high proportion of unimmunized children.”

On Monday, the U.S. Centers for Disease Control and Prevention said the United States has had more than 700 measles cases so far this year. Many of the cases are tied to two outbreaks among Orthodox Jewish communities in Brooklyn and Rockland County, N.Y.

Dr. MacDonald said that recent outbreaks of measles in Canada and the United States have followed similar patterns, with cases being concentrated at schools or in tight-knit communities where vaccination rates were too low.

Unvaccinated students “will not be uniformly spread across the community. They will probably be linked together. They’ll interact with each other,” Dr. MacDonald said.

Once the disease is introduced, “Boom, it takes off, because it’s so contagious,” she said.

Monika Naus, medical director of the communicable diseases and immunization service at the BC Centre for Disease Control, said the recent outbreak of measles in that province was fuelled by misinformation and myths about vaccines, and demonstrates why it’s so important to keep vaccination rates high.

“If we continue to see declining rates, at some point, we could see re-establishment of endemic measles,” she said.

Measles is one of the most contagious viruses in existence. Up to 90 per cent of non-immune people will catch it if exposed, and there is no cure or effective treatment. While most people will recover, measles can cause pneumonia, brain swelling and death.

The new Ontario study also found that 2.4 per cent of students in the province had a non-medical exemption. Despite the exemption, about 60 per cent of those students had received at least one vaccination. Dr. Wilson said there could be numerous explanations, such as parents who requested an exemption and later changed their minds.