Scientists working with Canada’s CHIME telescope have pinpointed the location of a powerful series of cosmic outbursts – a rare discovery that further deepens, but may ultimately help solve, one of this century’s biggest astronomical mysteries.

The result, announced Monday, marks only the second time anyone has identified the apparent source of a repeating “fast radio burst” or FRB. In this case, the source is located somewhere within the spiral arms of a galaxy much like ours, but approximately half a billion light years away. The first repeating burst, which turned up in 2012, was found in a much smaller and more distant galaxy, which suggests FRBs can occur in a diversity of cosmic environments and circumstances.

The discovery is cause for excitement among astronomers, who have been hard pressed to explain what produces the intermittent and short-lived radio pulses that typically last only a few milliseconds while packing more energy than the sun can generate in a day.

“The big question in our field is what can produce an FRB?” said Kenzie Nimmo, a doctoral student at the University of Amsterdam who, together with colleagues, presented the new finding at the annual meeting of the American Astronomical Society in Hawaii. The results are also described in detail in a study in the science journal Nature.

About 100 FRBs have been reported since the phenomenon was first noticed in 2007. They have been detected coming from all directions in space.

The challenge for scientists trying to explain the phenomenon is compounded by the fact that at least a handful of FRBs are known to repeat. This rules out the possibility of a one-off event that completely destroys its source, such as a stellar explosion or a collision of massive celestial objects. In at least some cases, the mechanism behind an FRB must be something that can occur more than once.

In order to better understand FRBs, astronomers have tried to narrow down where repeating bursts are located. The quest has accelerated dramatically since CHIME – the Canadian Hydrogen Intensity Mapping Experiment – began recording bursts in the summer of 2018. Located near Penticton, B.C., the unique radio telescope sweeps across the entire northern sky once a day. This greatly increases its chances of detecting FRBs relative to other facilities around the world.

Among the deluge of discoveries CHIME has made since astronomers first began publishing results a year ago are several FRBs that are known to repeat. The catch is that CHIME’s view of the sky is too coarse to link those bursts with a single candidate source – just as someone with blurry vision might have trouble identifying who is speaking on a crowded stage.

To overcome that hurdle, scientists involved with the Canadian facility have working arrangements with other radio observatories to track down bursts that CHIME has already demonstrated can repeat. This occurred in the fall, in a collaboration between CHIME and several European observatories, which led to Monday’s announcement.

While the new result adds complexity to the emerging picture of FRBs, collaborators said that the find could help rule out explanations that depend strongly on bursts coming from one particular type of host galaxy.

“Having a new mystery to work on is a delight,” said Dustin Lang, a CHIME team member and computation scientist at the Perimeter Institute for Theoretical Physics in Waterloo, Ont.

Dr. Lang added that whatever the cause turns out to be, the Canadian instrument is well placed to help crack the mystery and potentially make use of FRBs as probes of the universe at large scales. 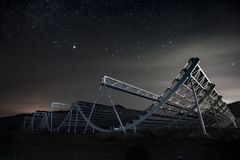