Samantha McLachlan is done talking about the pandemic with neighbours and friends who brush off the coronavirus as though it’s no threat.

“I’ll be honest,” she said, “I just had to stop having the conversation. Come and live in my world. You’ll see what I’m seeing.”

Ms. McLachlan’s world is the hallways and patient rooms of Cortellucci Vaughan Hospital, the only health care facility in Canada dedicated exclusively to COVID-19. What she is seeing now in her job as patient care manager of the ICU is a rising tide of patients, most younger than 60, washing in from overwhelmed hospitals in the Greater Toronto Area.

Husbands and wives. Brothers and sisters. Mothers and daughters. In the third wave at a pandemic hospital, Ms. McLachlan said, “it’s the whole family that’s coming in.”

Those trends are expected to accelerate as new variants of the virus tighten their grip on most provinces west of the Maritimes. On Friday, Ontario reported 4,227 new cases, its second-highest one-day tally of the pandemic (or highest, if you take into account that the previous peak included a catch-up of backlogged cases).

Already, there are about 1,500 COVID-19 patients in Ontario hospitals, 541 of them in intensive-care, according to Critical Care Services Ontario. The weight of COVID-19 has grown so heavy that, on Thursday evening, the provincial government ordered all hospitals outside of Northern Ontario to ramp down non-urgent operations so front-line staff could be redeployed to care for the infected.

The province might have been forced to take that step earlier if not for the relief valve provided by Cortellucci Vaughan. Since opening in early February, the hospital has cared for 285 COVID-19 patients, 56 of them in the ICU, all of them transferred from hot-spot hospitals that had run out of room.

Of those, 24 died and 177 had been discharged as of April 7. The rest were still being treated.

Cortellucci Vaughan was conceived as a different kind of relief valve. As a second site for the Mackenzie Health system in the fast-growing Region of York, north of Toronto, the new hospital was supposed to take some of the pressure off Mackenzie’s overwhelmed Richmond Hill hospital.

More than a decade of planning and building went into the $1.7-billion facility. Then, a month before it was scheduled to open, Mackenzie Health executive vice-president Mary-Agnes Wilson got a call from her boss, president and chief executive officer Altaf Stationwala. It was a Saturday afternoon. She was in the parking lot of a grocery store.

“He said that he was having conversations with Ontario Health and the ministry and the Premier’s office around the possibility of using the Cortellucci Vaughan Hospital in a different way,” recalled Ms. Wilson, who is also Mackenzie’s chief operating officer and chief nurse executive. “And he said, ‘Do you think we could do this?’ ”

Ms. Wilson was taken aback at the suggestion, but she thought they could pull it off. She understood the need for more back-up capacity.

Over the holidays and in early January, Mackenzie’s Richmond Hill site was buckling beneath a crushing second-wave peak. At one point, the hospital had 51 ICU patients, despite having room for a maximum of 44 – twice the number the old hospital was designed for. The remaining patients were intubated in the emergency department.

“We were very much one of those hospitals who was being rescued on a regular basis and needing to have patients transferred out of our hospital to other centres, because we were unable to cope with all of the COVID-19 patients that were coming in,” Ms. Wilson said.

Cortellucci Vaughan opened as a COVID-19 centre on Feb. 7, the day it was originally scheduled to open as a full-service hospital. It has 11 floors and 1.2 million square feet of space, but only three floors are open to patients, one home to a 35-bed ICU, the others to medicine units. Every gleaming, high-tech private room in use is occupied by someone with COVID-19.

None of those patients come through Vaughan Cortellucci’s emergency department, which remains closed. The nurses hired to work there have been redeployed to coronavirus care. Instead, every patient comes via the Incident Management System, one of the unheralded successes of the pandemic.

Regional IMS tables made up of representatives from different hospitals meet regularly to figure out how to spread the burden of COVID-19 more evenly, which is how patients from hot spots such as Brampton end up being treated in critical-care units hundreds of kilometres away in Kingston or London.

Last Sunday, Cortellucci Vaughan received its regular weekly directive from IMS. Its marching orders were to find space and help schedule ambulance transfers for 30 COVID-19 patients on the medicine wards and three in the ICU by the end of the week, said Madeline Logan-Johnbaptiste, Mackenzie Health’s director of patient flow.

Ms. Logan-Johnbaptiste, whose job makes her something of an air-traffic controller for both sites, said Cortellucci Vaughan was able to complete its weekly IMS directive by Thursday, taking in patients from hospitals in Brampton, northwest Toronto, Scarborough, Newmarket and Mackenzie’s own Richmond Hill site.

At the Richmond Hill hospital, chief of emergency medicine David Rauchwerger sees future Vaughan Cortellucci patients at the start of their battles with the virus. Some don’t even make it that far. He recently cared for a 40-something COVID-19 patient who deteriorated so quickly that the patient had to be intubated in the emergency room and died before a bed could be found in the packed ICU.

In the third wave, COVID-19, “is almost like a different disease,” Dr. Rauchwerger said, a huge challenge given his emergency department is back to prepandemic volumes. “This go around, we’re seeing younger, healthier, people that don’t necessarily have underlying comorbidities come in really sick with COVID. Those people require not only critical care resources, but prolonged critical care resources.”

The shift in the age distribution is clear in data from Cortellucci Vaughan, numbers that reflect what’s happening in the communities from which the patients were transferred.

In February, 6 per cent of the pandemic hospital’s patients were between the ages of 20 and 39. In March, the figure was 2.2 per cent. Now, in the first week of April, it’s 27.3 per cent. Middle-aged patients also make up a larger share today than in the past, with those in the 40-59 age bracket going from 24 per cent of Cortellucci Vaughan’s patients in February to 45.4 per cent in the first week of April.

By contrast, the hospital has seen its share of COVID-19 patients older than 60 plummet. In the first week of April, none were older than 80, evidence of the success of a vaccination campaign that began with the elderly.

Treating the same disease over and over for months takes a toll, said Katharina Plenk, chief and medical director of the department of medicine at Mackenzie Health.

“It’s repetitive, but the tiring aspect is just that despite using the latest evidence … we still have patients that get sicker before eyes,” she said. “As a physician, you feel powerless.”

Before the call: Inside Ontario’s newest hospital on the eve of running pandemic relief
2:12
April 9, 2021 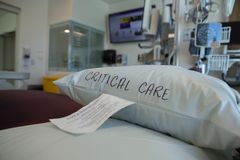