At least nine women and girls across Canada have been killed in what are believed to be domestic homicides in just over a month during the COVID-19 pandemic – a statistic that experts working to end violence against women say should be sparking public outrage.

“We always treat these as individual incidents, which they are – but they’re not one-offs,” said Angela Marie MacDougall, executive director of Battered Women’s Support Services (BWSS) in British Columbia. “They are part of what has already long been a global pandemic. One that is about relationship violence and male violence against women."

These killings, which occurred between April 1 and May 4, span the country, from Hammonds Plains, N.S., to Sundre, Alta. The ages of the women also range. A 24-year-old in Calgary. A 33-year-old expectant mother in Brockville, Ont. A 55-year-old woman and her teenage daughter in Strathcona County, Alta.

At least three of the men who killed these women also then killed themselves. Others were charged with their murders. One alleged killer is still missing and wanted by police. The nine deaths were tracked by BWSS and confirmed through local media reports by The Globe and Mail.

Carmen Gill, professor of sociology at the University of New Brunswick in Fredericton, was working on a paper about coercive control in relationships when the pandemic began, so the risks for women trapped at home with their abusers was already top of mind for her.

For Prof. Gill, these cases – and the shock that many mourners have expressed online about them after the fact – are signs that we need to broaden our societal understanding of what violence looks like.

For example, when it came to light that the mass shooting in Nova Scotia last month began with a violent domestic assault by the gunman on his common-law spouse, many news stories highlighted the fact that the shooter had no criminal record of domestic violence.

“We pay attention when there are bruises, when there is physical evidence of violence. But we seem to be more relaxed when we see people controlling their spouses or when they are exhibiting certain behaviours toward them. And we don’t necessarily pay attention to this to realize that there is something bigger behind that is happening,” Prof. Gill said.

“If we are defining violence only through the prism of physical violence,” she said, then we have no hope of preventing these deaths.

“They slip through the cracks. This is how some women are getting killed,” said Prof. Gill, who is also a member of the Canadian Femicide Observatory for Justice and Accountability. “It’s extremely hard to believe that we’re still not paying enough attention to this.”

There is no definitive way of knowing how many women have been killed by relatives or intimate partners in recent weeks, because there is no real-time federal tracking system in Canada. The Canadian Femicide Observatory for Justice and Accountability does track these murders, but it relies heavily on police and media reports, and face challenges when, for example, police services do not release the names of victims.

On average, one woman in Canada is killed by an intimate partner every six days, said Marie-Pier Baril, press secretary for Maryam Monsef, Minister for Women and Gender Equality and Rural Economic Development.

“Since the pandemic struck, front-line service organizations have noted a surge in requests for help from women and children experiencing and fleeing violence,” Ms. Baril said. “There is an estimated [20-per-cent] to 30-per-cent increase in domestic violence, calls to shelters and demand on the [gender-based violence] sector, mirroring recent trends in China, France, Cyprus, Singapore, the United Kingdom and the United States.”

Ms. MacDougall said calls to the BWSS support line have indeed spiked during the pandemic.

“Power-based violence is at the heart of this kind of violence, and it thrives under isolation,” she said.

BWSS has scaled up its support services in response and has been heartened by the unlikely partnerships it has found with businesses in the private sector, including hotels.

Ms. Baril said the federal government has allocated $40-million as part of its COVID-19 economic response plan to the federal Department for Women and Gender Equality (WAGE) – $30-million of which has gone to address the immediate needs of shelters and sexual-assault centres across the country.

And while some organizations on the front lines of violence against women – including BWSS – have not yet received any additional funding, Ms. Baril said that the remaining $10-million of the WAGE funding will begin to flow in the coming weeks to “address gaps and assist additional organizations.”

In the meantime, Ms. MacDougall said the work continues.

“For us, it doesn’t really matter whether we’re talking about COVID-19, pre- or post-. We continue to do the work, and we know that it’s an epidemic,” she said. “For every woman that’s killed, we know from our work that there are thousands more that are living in fear.” 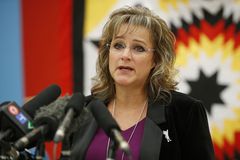