At least a half dozen Canadians have been criminally charged during the coronavirus pandemic for behaviour police say poses a direct risk of spreading the virus.

A 20-year-old from Taber, Alta., was charged with mischief on Wednesday after he allegedly participated in a social-media prank that involved licking products inside a store for an online video.

Police say the suspect had entered the store with a small group, and was spotted by a witness attempting to lick products in the store. As a result, the store had to remove some items from their shelves and sanitize the area. Police identified the suspect through a licence plate number of a vehicle the group left in. They believe the motive behind this act was "to apparently create a TikTok video to participate in what some are calling the ‘Covid Challenge.’”​

“Reliable and clean food supply is one of our greatest needs at this time. To waste cleaning supplies and food from our shelves during this pandemic is unacceptable,” Chief Graham Abela said. "We will investigate and where necessary lay charges to the fullest extent of the law to help curb this type of prank.''

Police have also raised concerns about people deliberately coughing on officers during the pandemic, with at least five Canadians having now been charged with coughing as assault.

A 24-year-old Coquitlam, B.C., man was charged with assaulting a peace officer after he allegedly spit on police officers, following his arrest for a break-and-enter on April 6. Police had asked the man if he was sick as part of standard screening procedures, and he had said yes before spitting on them.

A 48-year-old man in Wetaskiwin, Alta., is facing a similar charge after he allegedly coughed on an officer on April 5. The man – who had been arrested for breaching court-ordered conditions – told police he had the virus, and “coughed intentionally into an officer’s face and again when escorted to the police car. The male intentionally coughed into another officer’s face when being processed at the detachment.”

Three days earlier, a 27-year-old Lethbridge, Alta., man was charged with assaulting a peace officer after he allegedly coughed in a police officer’s face during an arrest. According to police, the man told them he had been exposed to a person with COVID-19 and hoped they would get infected.

Canadian Police Association president Tom Stamatakis said threats of spreading COVID-19 – whether the person actually has it or not – are “very, very serious.”

A challenge for first responders, he said, is that they are dealing with people, often, who they know very little about, in uncontrolled and tense environments. These concerns are amplified during a pandemic.

“Our members are already operating with a heightened sense of anxiety as it is,” Mr. Stamatakis said. “Not just anxiety for themselves in terms of being exposed and potentially infected, but also because of the potential risks to their families as well.”

John Struthers, president of the Criminal Lawyers’ Association, similarly cautioned people that, particularly in these unique circumstances of a pandemic, this is potentially a ”very serious offence.”

“The intent of the person is also important," he said. "If they are positive for COVID-19 and they are aware of it, then the intent is very serious. It could be intent to cause serious bodily harm or even death.”

Police are not the only ones at risk. In Edmonton, a 38-year-old man was charged with assault on April 5, after he coughed on a bus driver and then the transit officers who responded to break up the altercation. The man claimed to have tested positive for COVID-19.

And in late March, two New Brunswick men were charged on March 26 after they allegedly deliberately coughed on neighbours in a rooming house. The two men had recently travelled to the Dominican Republic, and neighbours had complained that they were not properly isolating themselves. Police said that the men had responded by coughing on those neighbours, and were both charged with assault. 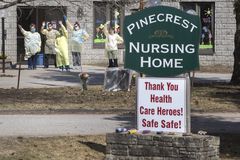