Alberta’s Auditor-General is criticizing the government for failing to fix problems pointed out six years ago in a program that’s supposed to guarantee coal and oil sands mines clean up after themselves.

Doug Wylie says there’s so much confusion over who’s responsible for the government’s own contaminated sites that there’s no stable funding to ensure that an abandoned coal mine in northern Alberta stays safe.

“There is an impact beyond accounting and process issues,” Mr. Wylie said in a briefing before his report was tabled in the legislature Thursday. “This impacts sites and it impacts people within the province.”

Among other issues, Mr. Wylie’s latest report revisits the Mine Financial Security Program first audited in 2015. It also looks at how the government handles contaminated sites for which it is responsible.

Mr. Wylie found the government hasn’t answered concerns about how company payments into the security fund are calculated. He found five ways in which it still allows companies to overstate their assets, underestimate the effects of oil price declines and delay payments.

“After six years of analysis, the department has not decided if and how the calculation should change,” the report says.

The government currently holds $1.5-billion in security on mining liabilities of $31.5-billion, the report says.

It also says there are problems with how the government handles contaminated sites when it can’t find the responsible party or when a site doesn’t fall within the purview of the Orphan Well Fund or any other management group. The government says there are 2,600 such sites with an environmental liability of $248-million.

Too often cleanup gets shuffled between Alberta Environment and Parks and the Alberta Energy Regulator, Mr. Wylie writes.

In the case of the old Smoky River coal mine near Grande Cache, the regulator stepped in on an emergency basis in 2018 to prevent the failure of a selenium-poisoned tailings pond. Alberta Environment told the regulator the work would be funded through the Environmental Protection and Enhancement Fund, then folded the fund back into general revenue, which left the regulator on the hook.

The same funding issue is preventing the regulator from fixing sinkholes caused by old coal mines in southern Alberta.

The report says the government has no risk assessment for its sites or analysis of their status. It doesn’t have individual cost estimates for cleanup or for keeping sites safe into the future.

For those reasons, Alberta’s estimates of its own environmental liabilities are suspect, assistant auditor Eric Leonty said.

“It could be more, as more information is available and it’s determined that the government is responsible for more sites,” he said.

In an e-mailed response, Alberta Environment spokesman Paul Hamnett said consultations on reforming the mine security program are to be held this summer.

“The review will ensure appropriate funds are being collected over the life of the project to cover reclamation liabilities and ensure continuous program improvement, including feedback from the [auditor],” he said.

The department is reviewing its contaminated sites to collect the information Mr. Wylie found lacking, he added.

“Alberta Environment and Parks and the Alberta Energy Regulator are working on a long-term solution that will bring clarity over the responsibility and funding for those sites.”

New Democrat environment critic Marlin Schmidt said his party tried to fix the mine security program when it was in power from 2015-2019. The report that resulted, he said, has been shelved.

“It’s sitting on the minister’s desk,” he said.

Mr. Schmidt said the fund needs more money while there’s money to be had.

“We don’t know how much longer these assets will be valuable.”

“At essentially every turn, the (program) is designed to favour oil sands operators over taxpayers,” he wrote. “Given the (United Conservative Party’s) track record ... there is absolutely no reason to think or hope that they will address this problem meaningfully in the upcoming review.”

Regan Boychuk of the Alberta Liabilities Disclosure Project said the problem is simple: The fund needs to collect more money.

“Billions of dollars should already be in the bank from these highly profitable companies,” he said.

“The only thing that’s going to clean up the oil sands is the revenue from producing that bitumen. We can either save the money for that cleanup while that money is still coming out of the ground, or we can wait until they’re done producing.” 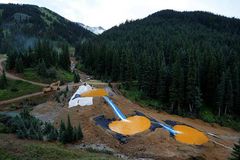