You can’t swing a French fry these days without hitting a Beyond Meat Burger. In addition to A&W Canada restaurants (which sold out briefly when the pea-protein patty was launched last year), Earls, White Spot, Triple-O’s and too many small restaurants to list now feature it on their menus. By the end of May, the Beyond Meat products, including sausages, chicken strips and beef crumbles, will be available in grocery stores across the country.

Of all Beyond products, the burger is king. In fact, the plant-based beef substitute is so popular, it has raised the ire of the Quebec Cattle Producers Federation, which filed a complaint with the Canadian Food Inspection Agency over the use of the word “meat.”

The Beyond Burger’s appeal – and potential source of confusion, according to the cattle producers – is that it really does look, cook and taste a lot like animal meat. It has a fibrous texture you can chew, it oozes greasy coconut oil and it was created with a precise combination of carbohydrates and amino acids that allows for an almighty Maillard reaction – the non-enzymatic browning or caramelization, which explodes with nutty aroma, concentrates all the umami goodness into crispy bits on the crust and is probably the main reason why beef burgers make so many of us go weak at the knees.

I understand the appeal. I am also confused – or at least I was for the longest time. Sure, more omnivores are choosing to eat less meat these days, which is terrific news for the planet and everyone’s health, and also helps explain the Beyond Burger phenomenon.

But if someone truly hates the flavour of meat or is so disgusted by the idea of eating animal flesh, why, why, oh why would they want to eat a highly processed food product that wants to fool you into thinking it has just been butchered from a bloody carcass that once contained a beating heart?

To get to the bottom of this beefy conundrum, I flipped the script and ate my way through a spectrum of veggie burgers that don’t try to imitate meat, but instead put whole vegetables front and centre. What I discovered is that a great veggie burger is the sum of many parts. And – surprise, surprise – the blander the patty, the better because it then serves all the other essential components – bun, sauces, lettuce, pickles, etc. – that define a burger according to the deep-rooted childhood memories of our collective taste consciousness.

Perhaps the Beyond Burger isn’t popular because it tastes like beef, but because it doesn’t taste like much at all.

River Market’s new vegetarian food-court restaurant, from the owner of nearby El Santo, offers the most proudly vegetable-forward burger ($14) in the bunch. The patty is made from roasted celeriac, which is shredded, bound with a small amount of breadcrumbs and grilled with dark char marks. The rosti-like texture is interesting (crispy on the outside, soft in the centre). And the earthy flavour is bold enough to stand up to a thick smear of blue cheese and a leafy layer of Swiss chard. Fried shallots and smoked-blueberry barbecue sauce combined with a toasted Kaiser bun satisfy the primordial cravings for wood-fired cooking that most people associate with burgers. But is it a burger? No, it’s a healthy, fresh, well-composed sandwich.

Blah. This is the reason so many veggie burgers get a bad rap. They taste like garden soil. Heavily laced with smoked paprika, this beet-and-quinoa patty tastes like soil that’s been dug up from underneath the smouldering timbers of a burnt barn. Besides being soft and mushy, the patty is also extremely thick. Thus, it has no chance of hiding behind the drippy wet slices of iceberg lettuce, pale tomato and tangy cucumber that are also stuffed inside a decent sourdough bun embossed with weird char marks that look like hot-iron cattle branding. The kitchen would be better off applying that heat to the patty. Guests would be better off sticking to the golden fries and excellent kale salad that come with the $19 platter – or ordering a Beyond Meat patty (also available) instead. This is a gourmet veggie burger gone wrong.

This is a fast-food veggie burger ($7.99) from a nondescript hole-in-the-wall – and I couldn’t devour it fast enough. Why was it so good? It was partly the patty, locally made by an outside supplier from a secret recipe rich in soy protein. The “meat” was pale yellow and fairly bland with just a subtle hint of piquant spice and green herbs. But the cooking method – blasted with high heat on top and bottom from a forced convection-air impingement oven – gave it a terrific texture that was crisp and chewy all around, yet creamy inside. A soft, squishy, impeccably fresh whole-wheat bun was slathered in yellow mustard and Heinz ketchup, giving the burger a traditional flavour profile. The cheese (optional) was a cheap processed slice. The vegetables – dark-green leaf lettuce, ripe hothouse tomatoes, crunchy red onion – were all market fresh. And the whole caboodle was packed with 30 grams of protein, making it an ideal postworkout indulgence. It didn’t taste like meat, but it did taste like a good, old-fashioned burger that satisfied all my cravings. I didn’t miss the beef at all.

Top of class, numero uno and scrumptious to the very last bite, the Arburger ($15.75 with fries and salad) is a classic, whole-food comfort burger made with gourmet flourishes tweaked to perfection. The quarter-pound patty is made in-house from lentils, mushrooms, tempeh, walnuts and brown rice. The mushrooms are prominent and add umami heft without tasting too earthy. It’s grilled on a flattop for a thin veneer of golden crisp. But the smooth, firm texture – and of all the lessons this taste-test taught me, firm texture is crucial to a great veggie burger – is achieved by partly dehydrating the patties and then allowing them to air dry in the fridge for a day so the natural glues in the mixture all bind together. A delicious soft, white potato bun from Livia Bakery is spread with a creamy, Big Mac-style special sauce and The Arbour’s own tangy ketchup and mustard. It’s stuffed with sharp pickles, white cheddar and crisp iceberg lettuce. Be sure to add smoky, crackly eggplant bacon for an extra $2. It’s phenomenal.

Opinion
Vancouver’s Big Day Barbecue is deliciously ambitious with over 50 events this summer
May 10, 2019 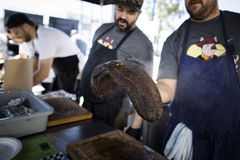 Opinion
Vancouver’s Livia Cafe and Bakery is so much more than its sourdough
April 26, 2019 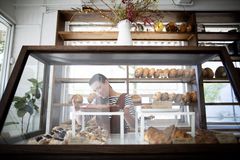 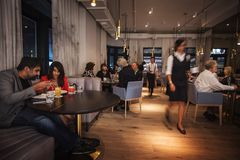