A British Columbia First Nation whose fishing grounds were soiled by a diesel spill when a tug boat ran aground is suing the owner of the vessel for alleged negligence and the federal and provincial governments for what it calls an unacceptable response.

The Heiltsuk’s territory centres in the Great Bear Rainforest on B.C.’s central coast, and its lawsuit says the fuel spill decimated members’ livelihoods, its clam fishery and took a toll on first responders.

The American-owned tug the Nathan E. Stewart ran aground and sank near Bella Bella on Oct. 13, 2016, spilling 110,000 litres of diesel fuel, lubricants, heavy oils and other pollutants.

The Transportation Safety Board released a report in May saying a crew member missed a planned course change because he fell asleep while alone on watch.

Elected Chief Councillor Marilyn Slett of the Heiltsuk Tribal Council told a news conference on Wednesday the legal action in B.C. Supreme Court hinges on loss: “Loss of food, loss of employment, loss of culture and loss of trust.

“I cannot overstate the importance of Gale Pass to our community,” she said, referring to the nation’s food harvesting, village and cultural site.

Ms. Slett said two years after the spill, the provincial and federal governments as well as Houston-based tug boat owner Kirby Offshore Marine have declined to do a meaningful environmental impact assessment to determine the extent of contamination on the surrounding land, sea and marine life.

“Though we have made several requests, Canada and B.C. have refused to acknowledge their duty to consult with us on the framework guiding the environmental impact of the spill,” she said, adding the First Nation is hoping the legal action sets a precedent for oil spill response for the province and the country to prevent the type of “chaos” that resulted after its experience.

The allegations have not been proved in court and no statements of defence have been filed on behalf of the governments or Kirby Offshore Marine.

The Attorney-General of Canada did not respond to a request for comment.

British Columbia’s Environment Ministry said in a statement it is committed to working with the federal government and to “engage with Heiltsuk as appropriate for a federally led initiative.”

Matt Woodruff, spokesman for the Kirby Corporation, said in a statement that the company’s lawyers “will take the appropriate actions to defend our interests in court.”

Besides compensation for missed harvesting opportunities, the Heiltsuk incurred costs associated with environmental testing and its own investigation, Slett said, adding the First Nation is working to assess overall damages, which would be in the millions of dollars.

The First Nation is seeking clarification on several key matters as part of its lawsuit, including Canada and British Columbia’s duty to consult communities affected by spills and whether Aboriginal title applies to the seabed and foreshore.

“This has never been decided by Canadian courts,” Ms. Slett said of water rights versus land claims.

Hereditary Chief Harvey Humchitt, who was a first responder after the spill, said the nation was misinformed about the seriousness of the spill and given the wrong location.

“When we arrived we were not given any resources, when the materials and crew did arrive they were ill equipped and disorganized.”

Booms were not deployed around the Nathan E. Stewart for 12 hours and were the wrong type and incorrectly set around the tug, causing them to break apart by the currents, Mr. Humchitt said. 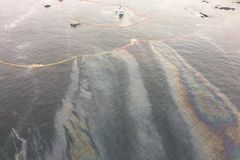