The head of the B.C. First Nation that shocked the world with the discovery of unmarked graves at its former residential school has joined leaders across Canada – including the Prime Minister – in a call for the Catholic Church to apologize for its role in the country’s colonial education system.

On Friday morning, the Tk’emlúps te Secwépemc First Nation held its first news conference since last week, when it announced the discovery of the remains of 215 former Kamloops Indian Residential School students. Kukpi7 (Chief) Rosanne Casimir said her community recently met with the local Catholic bishop, but still wants a public apology from the Vatican. She said the missionary order that ran the school has kept its internal records secret, adding that the remains appear to be of children whose deaths were undocumented and who were put in unmarked graves.

“We do want an apology – a public apology – not just for us, but for the world,” Kukpi7 Casimir told reporters from across the globe. “[We are] holding the Catholic Church to account – there has never been an apology from the Roman Catholics.”

Opinion: We witnessed the cruelty of residential schools as child-care workers. We will not remain silent about what we saw

Opinion: The shame of residential schools must be worn by us all – not just historical figures

Earlier in the week, the Archbishop of Vancouver apologized and pledged new resources to help make amends for the devastation wrought by the Indian residential schools, which Ottawa financed and churches ran for more than a century, with tens of thousands of Indigenous children forced to attend.

But Kukpi7 Casimir and members of Canada’s federal cabinet say they want a papal apology, which was a key call to action in the 2015 final report of the Truth and Reconciliation Commission (TRC) that the Liberal government accepted.

Prime Minister Justin Trudeau said Friday he asked Pope Francis to issue such an apology a number of years ago while visiting the Vatican. Mr. Trudeau said that as a Catholic, he is deeply disappointed by the church’s refusal to accept its role in the residential schools legacy.

He added that now is an important moment to reach out to parishes, bishops and cardinals to demand the institution be accountable. He also said the government hopes the church will change its position.

“Truth is at the heart of understanding our past and preventing further damage in the future,” he said. “We need to have truth before we can talk about justice, healing and reconciliation.”

The announcement of last week’s discovery garnered national and international attention, and led to commemorations across the country using shoes of young children to symbolize those who never came home.

NDP MP Charlie Angus said it has been three years since his party brought a motion to Parliament calling for a formal apology from the Catholic Church, and for the institution to turn over all documents pertaining to residential schools. He also said it sought to have the church pay the share it owes to survivors under a compensation agreement.

“It’s been three years and we’re still waiting,” he said.

On Friday, nine UN human rights experts, five of whom are special rapporteurs who study issues such as the rights of Indigenous peoples around the world, called on Canadian authorities and the Catholic Church to conduct investigations related to the remains of the children at the Kamloops school.

“We urge the authorities to conduct full-fledged investigations into the circumstances and responsibilities surrounding these deaths, including forensic examinations of the remains found, and to proceed to the identification and registration of the missing children,” they said in a statement released on Friday in Geneva.

The experts also called on the government to undertake similar investigations at all other Indigenous residential schools.

“Large-scale human rights violations have been committed against children belonging to Indigenous communities. It is inconceivable that Canada and the Holy See would leave such heinous crimes unaccounted for and without full redress,” they added.

The experts called on the government of Canada to fully implement the TRC’s recommendations. “For far too many years, victims and their families have been waiting for justice and remedy. Accountability, comprehensive truth, and full reparation must be urgently pursued,” they said.

The Prime Minister said on Friday that it has been a painful week for “so many Indigenous people and communities across the country.” He said $27-million announced this week, first earmarked in the 2019 budget, will be “deployed immediately” to communities to “find and honour children who died at these institutions.”

“This is something that communities have asked for, and we’ve long been here to support that,” Mr. Trudeau said. “We also know that residential schools were only one piece of a larger, colonial system. And the work to right these wrongs, both past and present, is far from over.”

Kukpi7 Casimir characterized the money as “not new funding” and noted many First Nations want to do their own searches of former school sites with the type of ground-penetrating radar that found the remains in Tk’emlúps.

“Our costs are still to be determined as we are still investigating,” she said. “It’s still early days and we’re still just beginning.”

Former TRC chair Murray Sinclair told a House of Commons committee on Thursday that an independent study is needed on where the burial sites are and “what the numbers are going to tell us.” He said a parliamentary committee should oversee the investigation to ensure it is done properly.

Mr. Sinclair, who is a retired senator and judge, also said the RCMP had begun an investigation and that in a “typical heavy-handed” way, were “simply intimidating people rather than helping them.”

The office of the local RCMP detachment in Kamloops confirmed on Thursday it has opened a case related to the remains, but its commanding officer denied there was any tension, and said his investigators are consulting with the Tk’emlúps te Secwépemc First Nation.

Kukpi7 Casimir did not address any current tension between local Mounties and her nation, but she acknowledged the RCMP’s history involves forcibly removing Indigenous children from their families to bring them to residential schools.

She said her nation decided not to demolish the school that once created so much pain because they view it as part of the country’s “ugly truths” that can be used to improve society for future generations.

“For us, it is a very huge piece of history that we do not want to be forgotten,” she said. 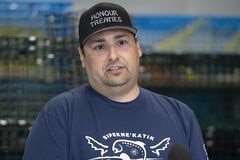 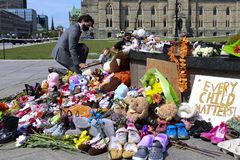 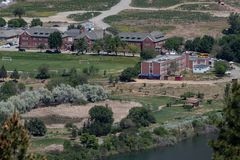 Follow Mike Hager and Kristy Kirkup on Twitter @MikePHager @kkirkup
Report an error Editorial code of conduct
Due to technical reasons, we have temporarily removed commenting from our articles. We hope to have this fixed soon. Thank you for your patience. If you are looking to give feedback on our new site, please send it along to feedback@globeandmail.com. If you want to write a letter to the editor, please forward to letters@globeandmail.com.
Comments