The B.C. Supreme Court judge hearing the extradition case of Meng Wanzhou indicated Tuesday she was struggling to understand aspects of the defence’s argument that the offence the Chinese executive is accused of in the United States is not a crime in Canada.

Ms. Meng, the chief financial officer of Huawei Technologies Co. Ltd., is accused by the U.S. of fraud, in connection with an alleged attempt to evade sanctions against Iran by lying to banks about her company’s conduct in that country. The Canadian government’s decision to detain the Chinese citizen and try to extradite her to the U.S. has sparked reprisals from the Chinese government, which has detained two Canadians under harsh conditions for more than a year, and stopped the import of some farm products from this country.

Despite some calls from members of Canada’s business community for a “prisoner exchange,” Prime Minister Justin Trudeau said on Tuesday he would not intervene in the case even if it could lead to the freeing of Michael Kovrig and Michael Spavor, the two detained Canadians.

The issue for Associate Chief Justice Heather Holmes at the first stage of the hearing is whether Ms. Meng’s alleged offence could be prosecuted if committed in Canada. Ms. Meng’s lawyers say no, because Canada has no economic sanctions against Iran. (If they win on that point, the case against her falls.) The Canadian government says yes, because the charge of fraud exists here, too, and sanctions are merely the context in which Ms. Meng made her alleged misrepresentations to banks in 2013.

In a series of hypothetical questions, Associate Chief Justice Holmes challenged the assertions of Ms. Meng’s defence team that the case is really about a violation of U.S. sanctions against Iran. First, she asked Eric Gottardi, a lawyer representing Ms. Meng, to consider the case as a simple domestic prosecution, not an extradition. What would happen, she said, if a Canadian did something to lead a bank to a financial loss. “Are you saying it’s not a viable subject for prosecution?”

“I don’t know on those facts,” Mr. Gottardi replied, but she persisted in asking why, if on such “simplified” facts a Canadian could be prosecuted, a Canadian could not then be extradited. Mr. Gottardi answered that on the facts of the Meng case, if a non-Canadian made misrepresentations to a bank even at a time when there were Canadian sanctions in place, thus breaching those sanctions, Canada would not assert its jurisdiction to prosecute.

The judge and lawyer seemed to be speaking on different wavelengths, Vancouver immigration lawyer Richard Kurland, who is watching the hearing from the public gallery out of interest, said in an interview.

“The two were communicating at odds with one another," he said outside the courtroom.

He said the big picture is whether Canada would become a sanctuary for those who violate foreign laws and enter Canada without the possibility of extradition. “The court has to look at that from a public policy perspective.”

Associate Chief Justice Holmes posed other hypothetical questions, including one drawn from a famous Canadian extradition case in which Germany sought the return of arms dealer Karlheinz Schreiber on tax-evasion charges. He was extradited in 2009.

Would the German offence of tax evasion not simply be a charge of fraud under Canadian law, if Canada had no such crime as tax evasion, she asked? (What matters, in extradition cases, is not the name of the alleged offence, but the essence of the conduct.) Would a Canadian judge need to know German law?

In a written answer to that question, which Mr. Gottardi described in court as an aide-memoire, and which the court agreed could be made public, Mr. Gottardi replied that the key was that a dishonest act occurred that caused harm to someone. Mr. Gottardi and another member of Ms. Meng’s team, Scott Fenton, said no harm could have occurred to banks allegedly lied to by Ms. Meng.

“The innocent victim of a misrepresentation simply cannot in law be at risk of civil fines or criminal penalties,” Mr. Fenton said, “and certainly not in this country.”

He said he found it “incongruous” that such punishments were possible in the U.S. “The golden rule is the innocent should not be punished.”

Another risk the banks in the U.S. faced from Ms. Meng’s alleged misrepresentations was to their reputation, for being seen to skirt sanctions against Iran. But Mr. Fenton attempted to turn that argument to his client’s advantage, by highlighting the importance of U.S. sanctions to the case against Ms. Meng: “All risk [to the banks] is driven by sanctions risk.”

Another sign that Associate Chief Justice Holmes was struggling with the defence argument is that she asked more than once whether the arguments about alleged harm to the banks should be put off till a later stage of the case, when evidence as to whether Ms. Meng committed an offence will be heard.

Mr. Fenton said no, they were dealing with a matter of law, not evidence.

Mr. Kurland said he thought the defence team had made some good arguments on the issue of double criminality, the issue of whether the alleged offence exists in both countries.

“Defence has poked gaping holes in the Crown’s case by pursuing double criminality, and underscoring that Canada does not have Iranian sanctions,” he said.

At a news conference on Tuesday, Mr. Trudeau rejected the possibility of intervening in the case. The proposal for an exchange has been pitched a number of times, most recently from Eddie Goldenberg, a lawyer who was a senior aide to prime minister Jean Chrétien. 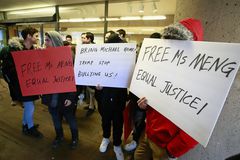 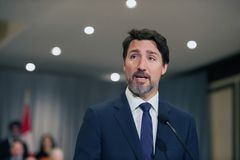