British Columbia will impose timelines to clean up thousands of idle oil and gas wells and Saskatchewan has pledged to study the measure as regulators scramble to address a looming financial and environmental crisis tied to the uneconomic sites.

The B.C. Oil and Gas Commission said new rules for the restoration of dormant oil and gas wells will include timelines, in an abrupt departure from existing regulations that let companies put off cleanup indefinitely.

The move follows a similar commitment from Alberta, where the number of inactive wells has ballooned to 89,217. They are among tens of thousands of idle wells tallied in a six-month Globe and Mail investigation that showed about 20 per cent of all oil and gas wells in B.C., Alberta and Saskatchewan are inactive, and that there are 54,147 more idle wells in those three provinces than there were in 2005.

Such wells no longer produce oil and gas, but they have not been plugged. Thousands more have been abandoned, meaning they have been sealed but the surrounding land has not yet been restored to its predrilling state.

Neither B.C. nor Alberta will say how stringent the timelines would be nor when they will take effect. A spokeswoman for the B.C. regulator said it’s “premature to speak to specifics regarding the regulation at this time.”

Her office said the glut of idle wells is a “very serious issue” and pointed to legislation last May giving the regulator broader authority to impose the timelines. B.C. has also increased the industry levy to clean up wells with no legal owner.

The Globe investigation found that 7,382 wells – or a third of all wells in the province – are inactive, and the number of defunct wells (those with no legal owner, also known as orphans) has jumped to 294, up from just 24 in 2014, according to the B.C. Oil and Gas Commission.

Adding to the strain is a brisk trade detailed by The Globe in which major companies routinely offload properties saddled with hefty cleanup obligations onto smaller players with scant ability to pay for remediation, despite regulations meant to prevent such deals.

This week, Alberta Energy Minister Margaret McCuaig-Boyd said the province is studying a combination of targets and timelines to reduce liabilities tied to the swollen inventory of inactive sites.

However, the minister balked at giving the Alberta Energy Regulator (AER) powers to block deals that are structured to bypass rules the regulator introduced to stop financially shaky players from acquiring high-liability wells.

Many U.S. states require companies to seek continuing approvals and post security bonds to keep wells inactive. In some cases, they have to show evidence that the wells could be returned to production if commodity prices improve.

The Canadian industry has lobbied against mandated cleanup timelines, saying it can’t afford increased costs at a time when even major companies are struggling with rock-bottom prices for heavy crude and natural gas.

“You have to understand the crisis that is occurring in the oil and gas sector across Canada right now," said Tristan Goodman, who spent 15 years as an executive with the AER and is now president of the Explorers and Producers Association of Canada, the lobby group for small producers.

“I think what you don’t want to do is send a whole group of companies into bankruptcy."

The Globe found that wells languished even when commodity prices were much higher than today’s levels. Nearly one-fifth of inactive wells in Alberta and roughly 10 per cent each in B.C. and Saskatchewan have been idle for 10 or more years.

The AER is encouraging companies to collaborate on cleanup under a new initiative called area-based closure. It involves companies pooling resources to lower costs of cleaning up wells in a given geographic area. However, there are no penalties if companies do not participate.

Brad Herald, vice-president of Western Canada operations for the Canadian Association of Petroleum Producers, acknowledged the program lacks teeth. “But it’s set up to achieve a reduction in the provincial inactive liability numbers, which everybody is supportive of," he said.

Saskatchewan Energy Minister Bronwyn Eyre said the province is studying timelines but plans to consult with industry next year as part of a wider policy review that will also examine well transfers.

She said that large companies own the vast majority of the nearly 26,000 inactive wells in Saskatchewan. That number has soared 62 per cent since 2005.

Cash-strapped Abbey Resources Corp. had received the ministry’s blessing to acquire 2,345 wells from major companies. It now owes more than $3-million to four municipalities for two years worth of unpaid property taxes and has arbitrarily cut its lease payments to farmers in half.

The province’s orphan well count would balloon – from 516 to nearly 3,000 – should Abbey go under. Ms. Eyre said the ministry is keen to avoid that and is currently examining Abbey’s proposed corporate structure.

“Many industry operators have found ways to operate during the downturn,” the Energy Minister said. “And we wouldn’t want the industry to pay a disproportionate share of Abbey’s operating costs, because that has come up as an issue.”

Hustle in the oil patch: How large oil companies shed millions from their books
3:24
November 23, 2018 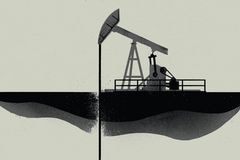 Follow Jeff Lewis and Renata D’Aliesio on Twitter @jeffalewis @renatadaliesio
Report an error Editorial code of conduct
Due to technical reasons, we have temporarily removed commenting from our articles. We hope to have this fixed soon. Thank you for your patience. If you are looking to give feedback on our new site, please send it along to feedback@globeandmail.com. If you want to write a letter to the editor, please forward to letters@globeandmail.com.
Comments