The Ontario government has unveiled a plan to revitalize Ontario Place that includes an expanded year-round music venue, zip-lines, a spa-waterpark and a new public beach. But it remains unclear how much this vision will cost the province to realize, and how much visitors will need to pay in admission fees when it finally opens.

After the government engaged in nearly two years of closed-door talks with bidders over redevelopment plans for the provincially owned Toronto waterfront site, Premier Doug Ford officially announced the winners on Friday at a windy rooftop event, with Ontario Place’s well-known Cinesphere IMAX theatre as the backdrop.

“This will be a public place for everyone to come and experience, and it will stay that way,” Mr. Ford said, stressing that the land will be leased and not sold off. “It will once again be the world-class destination that it was always meant to be.”

Mr. Ford had made the site a personal priority. His government restarted a process seeking private-sector proposals for Ontario Place in 2019, after a similar process under the previous Liberal government ran out of time before the 2018 election. According to the government, the revitalized Ontario Place will attract millions of visitors annually once work is complete later this decade.

On Friday, the winning firms offered more detail on their plans. Live Nation pledged to expand its existing concert venue. The enlarged performance space would hold 20,000 people for outdoor events but also convert into a 9,000-seat facility for the winter. Écorécréo, which operates a pirate-themed attraction in Montreal, is planning a new climbing park and an aerial obstacle course.

Therme is promising both a family-friendly waterpark and an adults-only spa, along with botanical gardens. Its plans also include a sandy beach that it says will be open to the public and free to visit. The company says the project will cost it $350-million, the biggest part of the $500-million the government says will be invested by the private sector at Ontario Place.

Toronto city councillor Joe Cressy, in whose ward Ontario Place lies, said the choices felt like “design by committee,” and that there was no indication of how the disparate parts would be stitched together to ensure the entire site works as a cohesive package.

“This is not a casino or a mega-mall, so it could have been worse,” he said, referring to proposals for the city’s waterfront Mr. Ford floated a decade ago when he was a city councillor and his brother, the late Rob Ford, was mayor. “But ‘could have been worse’ is not an acceptable policy for revitalizing public land.”

Mr. Cressy also criticized the lack of public consultation, a complaint that has been echoed by the advocacy group Ontario Place for All and the Opposition NDP at Queen’s Park.

The government says it now plans to launch public consultations to shape the new site. Mr. Ford defended the move to announce first and consult later, saying his government and its predecessors had heard plenty from the public about what they did not want at Ontario Place – such as a casino or condos – and his government listened.

Ontario Place was home to an amusement park before the provincial government shuttered those parts of the grounds in 2012. Much of the 50-year-old site, on artificial islands on Toronto’s Lake Ontario shoreline, is now showing its age. The rooftops of its futuristic-looking “pods,” which are suspended above the lake’s surface, are choked with weeds. The white paint on the catwalk guardrails is peeling or flecked with rust. The Cinesphere’s golf-ball-like dome, formerly bright white, is now grey and dull. Not far from where the Premier spoke on Friday lie the smashed remains of a snack bar, where a once-illuminated Coca-Cola sign lies on its side.

While the government has committed to keeping the pods and the Cinesphere in place, none of the bidders intend to use them or refurbish them. Heritage Minister Lisa MacLeod said the government was exploring having the Ontario Science Centre use them for programming.

Local activists have been pushing for an Ontario Place that has more public space people can use without having to pay.

Since the closing of the amusement park, the William G. Davis Trail on the site has been well used, as has the new Trillium Park on its east side. The government also promised to preserve these features, and Therme says it plans to refurbish the trail while keeping it accessible to the public.

Therme is promising to set aside about 3.2 hectares for free, public outdoor space, which the company says is 40 per cent of its portion of the overall site. The 3.2 hectares represents about a 20th of the total area of Ontario Place.

The site as a whole will first require substantial investment in soil remediation and utility work, both of which Queen’s Park has promised to fund. Under the Liberals, that cost was pegged at $100-million. Mr. Ford had no updated figure to share Friday morning.

“Well, I can’t give you an exact figure, but what we’re doing is putting a lot of money into it to keep the costs lower for everyone, to be inclusive,” he said.

Some construction could begin this year, the government says, though it acknowledges the best-case scenario is that it will be six to nine years before the public is able to use the new facilities. Toronto Mayor John Tory called the announcement “a very, very important beginning.”

It was also unclear how much money people will have to pay to enjoy these attractions, each of which will operate independently and could require a separate entrance fee. Mr. Ford suggested the price could be similar to going to the Toronto Zoo, which costs $28 plus tax for an adult.

In an interview, Anne-Marie Garner, Therme Group’s vice-president of corporate strategy, said admission prices had not been finalized. However, she said adults would be able to enter the spa for “under $40.” 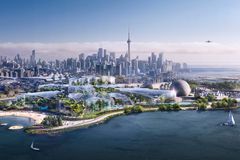