The Canadian Conference of Catholic Bishops says it’s incorrect to suggest that Pope Francis is refusing to apologize to survivors of Canada’s notoriously abusive residential schools.

The conference has sent a background paper to MPs and senators in a bid to clarify what it characterizes as “misunderstandings and factual errors” in media reports about the Pope’s decision not to personally apologize for the role played by the Roman Catholic Church in operating the schools.

The paper suggests that under the church’s decentralized structure, it’s not appropriate for the Pope to apologize, that it’s best left to Canadian bishops to pursue engagement and reconciliation with Indigenous Peoples.

A papal apology was one of 94 recommendations of the Truth and Reconciliation Commission.

Late last month, Bishop Lionel Gendron, president of the conference of bishops, issued a letter to Indigenous Peoples in Canada, indicating that “after carefully considering the request and extensive dialogue with the bishops of Canada, (the Pope) felt that he could not personally respond.”

That letter disappointed Indigenous leaders and Prime Minister Justin Trudeau, who had personally asked Pope Francis during a visit to the Vatican last year to consider an apology; it also prompted the NDP to propose a motion – supported by the governing Liberals and expected to be debated in the House of Commons this week – calling on the bishops to invite Pope Francis to come to Canada to apologize.

In the background paper sent this week, the conference of bishops says neither the Holy See nor the conference were involved in running the residential schools. But it says the 50 “autonomous” Roman Catholic entities that did operate schools have publicly apologized, both collectively and individually, and paid nearly $60-million in compensation and other payments under a 2006 settlement agreement.

Moreover, the paper notes that the conference of bishops has “on a number of occasions expressed regret and remorse at the involvement by various Catholics” in the schools.

As well, Pope Benedict met with a delegation of Indigenous leaders in 2009 “and expressed sorrow and regret for the abuses suffered” in the schools. At that time, the paper notes that Phil Fontaine, then national chief of the Assembly of First Nations, declared that the meeting with Pope Benedict “closes the circle of reconciliation.”

“To suggest that the Catholic community has not accepted responsibility for its involvement in residential schools is simply inaccurate. The Catholic Church has apologized in the way it is structured,” the paper says.

As for Pope Francis, the paper says he’s encouraging Canadian bishops to “continue taking leadership and assuming their proper role” in pursuing reconciliation and he “remains open to a future visit when it is opportune.”

“Sharing in the pain of Indigenous Peoples, he would certainly ensure such a visit includes meaningful encounters with them.” 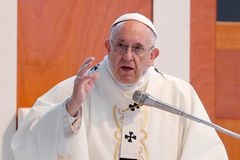