Even though one union leader thanked him for “opening the piggy bank,” Ontario Education Minister Stephen Lecce denies his government caved in to too many demands by the education workers union to avert a provincewide strike.

The Canadian Union of Public Employees (CUPE), which represents 55,000 custodians, secretaries and education assistants, said it had accepted no concessions in the deal announced on Sunday – just hours before the deadline for a Monday strike that would have closed many schools across the province.

But in an interview on Monday, Mr. Lecce said the tentative agreement is the first to see a union voluntarily accept the government’s target of limiting increases to wages and benefits to just 1 per cent a year – an objective set out in a bill before the Legislature that would force such a cap across the public sector.

Contentious talks are still under way with the province’s teachers unions, whose leadership Premier Doug Ford has in the past decried as “thugs.” But Mr. Lecce said Sunday’s deal shows his Progressive Conservative government can be reasonable.

“I think what it shows [is], this government, under the leadership of this Premier, that we can get deals with organized labour in the province of Ontario," Mr. Lecce said. “What it shows is that we are prepared to be reasonable and fair for both taxpayers, workers and, most importantly, for the interests of our kids.”

It was Laura Walton, president of CUPE’s Ontario School Board Council of Unions, who thanked Mr. Lecce for opening the piggy bank in remarks on Sunday night.

She cited the reinstatement of an annual $58.3-million “local priorities fund” for school boards and providing up to an additional $20-million a year to rehire hundreds of recently laid-off staff as big wins in Sunday’s deal, which must still be ratified by her members.

But in an interview Monday, she acknowledged that accepting wage hikes at just 1 per cent a year for three years was disappointing, with the average pay in her union just $38,000 a year.

“That would be the one thing that I wish we would have able to push on a little bit more,” she said.

She cited the maintenance of her union’s sick-leave provisions – 11 days at full pay and up to 120 days at 90 per cent pay for short-term disability – as a major win.

Mr. Lecce had targeted CUPE’s sick leave in remarks last week. He lauded a new provision in Sunday’s deal that will standardize and centralize the process for collecting doctor’s notes after those 11 days expire as a win for the government side. But Ms. Walton said the provision was the union’s idea.

When last-ditch talks began on Friday, job security and sick leave were the two outstanding issues. A government source close to the talks said the sick-leave issue was settled by Sunday morning. Early Sunday afternoon, the government offered the $20-million fund to hire back laid-off workers, including education assistants who work with high-needs children, and a deal was in sight, the source said.

Both Ms. Walton and Mr. Lecce played down the political speculation around the labour talks. The strike would have launched on the same day as the federal election campaign’s English-language leaders debate. Liberal Leader Justin Trudeau has tried to link Mr. Ford and Conservative Leader Andrew Scheer, citing Ontario’s education sector labour strife. Mr. Scheer’s campaign was watching the talks closely, and some critics speculated the Ontario government was eager to settle the issue to avoid harming the federal Conservatives.

“Our central objective throughout this process was to actually to depoliticize this, especially in the context of people like the Prime Minister, who consistently tried to intervene in the negotiating process,” Mr. Lecce said. 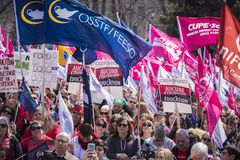 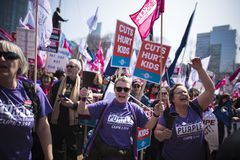