It was only the end of May, but as Balwinder Bal stood inside the Embassy Grand Convention Centre, watching his 12-year-old son get his first dose of a COVID-19 vaccine, his thoughts were drifting into September.

His son, Arshveer, never spent so much as a day in class this year, spending the entirety of his Grade 6 experience online. Their postal code – L6P, in Brampton, Ont. – endured some of the most frightening infection rates through the pandemic.

So now what? Mr. Bal wondered about his options in the fall.

“I’m always looking forward to sending him into school,” he said. “I’ll see. It depends what kind of class he gets, and if he has enough spacing in the class, fresh air to breathe. They [the government] have to do something.”

Families in Brampton opted for remote learning more than in any other jurisdiction in the country, with almost four in five students at Arshveer’s school, for example, staying home. In the L6P postal code, 75 per cent of students in the public school system attended classes virtually, and in the absence of a plan from the provincial government, many of those families are wrestling with unclear guidance and an uncertain path to bricks-and-mortar classrooms in the fall. The local school board said it does not have projections on how many students will return in the fall, but it has pushed the decision deadline to August so that families have more time. ((On Monday, the Peel board said it moved the decision date earlier. Families have between July 12 and July 30 to decide if their children will learn in person or online in the fall.)

Education Minister Stephen Lecce was questioned at a news conference on Tuesday about the lack of a back-to-school plan, especially as the province has kept two million students learning from home since mid-April despite rapidly declining COVID-19 case numbers. Quebec and British Columbia have released their plans, which include no longer grouping students by classroom cohorts. Mr. Lecce said Ontario’s plan would be released “in the coming weeks” and it would include getting students back into classrooms full-time and reintroducing extracurricular activities.

The worry among educators in Brampton, surrounding Peel Region and elsewhere is the longer-term consequences, whether it’s the social well-being of children or their academic achievement, after months of learning from home. Poleen Grewal, an associate director at the Peel District School Board, said an August deadline to decide between in-person and virtual school allows families to assess vaccination rates and case counts, she said.

“I think at the end of the day, everybody recognizes that nothing beats the kids physically being in school,” Ms. Grewal said.

Mr. Bal said he and his wife, a teacher, made the decision to keep their son home because his area was deemed a COVID-19 hot spot (his eldest son attends the University of Waterloo). It wasn’t easy. Arshveer spent too much time on a screen and not enough being physically active. He needed more help with schoolwork, which his parents had to help navigate.

“I don’t see a real progress in his all-round development. Online classes … is not a very good proposition. He has to learn from seeing things, experiments, interactions, collaborations, group work. All that can’t be achieved from online,” Mr. Bal said.

Similarly, Jasdeep Saini, another parent in the L6P postal code, said that the online experience has been far from ideal. His son will start high school in the fall, and his daughter will be going to university.

“Being online, all day, every day, for a year benefits nobody,” Mr. Saini said. “For my kids, it’s not hard, it’s just boring.”

He and his wife decided to keep their children home, because his elderly parents, who are more at risk of being infected, live with his family. Neighbours and other family were doing the same with their children.

He’s more comfortable to send his children into the classroom in the fall now that his parents have been vaccinated, but he’s still uneasy. ’'There are a lot of things this government hasn’t gotten right,’' he said. ’'We only have one hospital, our classrooms are way too full.’'

Parm Singh lives and teaches in the L6P area code. She’s had students with parents, grandparents and other relatives in intensive-care units at hospitals. Some of these relatives have died in recent months.

Ms. Singh is a French teacher. She started the year teaching core French to six in-person classes. Each time the school board asked families if they want to switch between remote learning and in-class instruction, more chose online as COVID-19 infections surged in her part of the world. By February, she was teaching two classes in-person and four online.

“I’ve been an expert at pivoting,” Ms. Singh said jokingly.

Ms. Singh is optimistic about the fall and students returning to the classroom. It’s been difficult for many to learn online, she said. There are times when students have logged in, but their cameras are off and they may not be in the room. “I have students who just stopped attending, just stopped doing the work. And I get it. … I understand how difficult this is for kids,” she said.

Of the 900 students who attend Walnut Grove, only about 200 chose to be in the physical classroom this school year. That also meant only 12 of the 32 classrooms were used.

“You’re just really used to the hustle and bustle of a school,” she said, later adding: “It was empty.” Even recess felt different, because classes went out at separate times so that cohorts would be separated.

Already Ms. Casciato is hearing from families that are eager to return. Parents have told her that changing job requirements means they won’t have the same flexibility. Many are feeling hopeful about vaccination rates, she said.

Mr. Bal’s son is scheduled for his second dose in August, although he’s closely monitoring recent reports of heart inflammation in young men after a second dose of mRNA vaccines. Meanwhile, he and his wife keep an eye on the COVID-19 case counts daily as they decide whether to send their son back into the classroom. 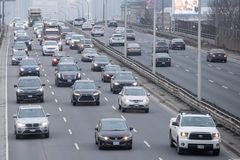