When three astronauts returned from the International Space Station earlier this month, it was to a very different world than the one they left.

For Jessica Meir and Andrew Morgan, both from the United States, and their Russian crew mate, Oleg Skripochka, the most obvious signs of change were the face masks worn by members of the recovery team that greeted them as they emerged from a Soyuz capsule in a remote area of Kazakhstan on April 16.

But COVID-19 is not the only medical hazard the trio now face. Like many space travellers before them, they must deal with the crushing effect of Earth’s gravity on their weakened bones and muscles after several months in orbit.

Val Fajardo, a researcher in muscle physiology at Brock University in St. Catharines, Ont., can’t do much about the coronavirus, but he has an interesting idea to test about the body’s deterioration in space.

NASA is interested in Dr. Fajardo’s idea, too. Before the coronavirus lockdown began, he received samples from the U.S. space agency of bone and muscle from mice that flew aboard the space station.

“It’s very exciting,” said Dr. Fajardo when test tubes bearing frozen mouse tissue arrived in his lab. “Not everyone gets to work with these kinds of samples.”

Together with Wendy Ward, a bone specialist and colleague at Brock, his goal is to examine the effect of a key protein on body tissues during space flight, and then determine whether blocking that protein can help astronauts retain their muscle and bone mass during long months aboard the station and on more ambitious forays beyond Earth’s orbit.

That would be an important step on the way to the first human mission to Mars. Currently, astronauts on board the station must spend two hours exercising each day in an attempt to slow down the effects of space on their bodies. But despite being among the fittest people on Earth when they launch, their workout regimen cannot halt an inexorable physical decline during their time in orbit.

“Exercise alone is not enough,” Dr. Fajardo said. “If we want to enable long-duration space missions in the future, it’s critical that we study potential countermeasures.”

It’s well known that muscles obey the principle of use it or lose it. But even for the most sedentary among us, some muscles are constantly at work keeping our bodies erect. Bones, too, are strengthened by bearing their load against the ever-present pull of Earth’s gravity.

In space, these burdens are absent, and the body responds with a complex series of biochemical changes. It’s here that Dr. Fajardo ultimately hopes to intervene.

At the heart of the research project is the protein called GSK-3. Discovered in 1980, it was first identified as an enzyme that plays a role in regulating the body’s storage and release of energy in the form of a molecule called glycogen. Since then, GSK-3 has turned up in a wide array of cellular processes. It has also been linked to a diverse set of health problems including diabetes, obesity, Alzheimer’s disease and bipolar disorder. It is a favoured target in the search for new treatments for these and other ailments.

Dr. Fajardo first came across GSK-3 during his PhD work at the University of Waterloo; it inhibits another protein he was working on that promotes muscle regeneration. He wondered whether GSK-3 might be having the same kind of negative effect on astronauts trying to maintain muscle tissue in space.

Despite the abundance of research on GSK-3, the enzyme is not well studied in the way that Dr. Fajardo has envisioned. That got the attention of those who review proposals for the scientific study of animal samples from the space station. (In this type of basic research, animals are the starting point for any future investigation that could involve human subjects.)

Ryan Scott, a project scientist and curator of biospecimens at the NASA Ames Life Sciences Data Archive at Moffett Field, Calif., said the Brock University study won reviewers over because it is exploring the problem of bone and muscle loss in space from a new angle, just as the space program is pivoting from the station to the moon and beyond.

“This is a very timely research topic,” he said.

In total, Dr. Fajardo and Dr. Ward now have samples from three different mouse experiments that flew on the space station between 2014 and 2019. These include samples of soleus muscle, which is found in the calf and which, in humans, is one of the most critical and well-worked muscles for maintaining a standing position.

The scientists will look for elevated levels of GSK-3 in the samples. If the results look interesting, a future step could involve sending mice to space with a drug that inhibits the enzyme to see whether that improves the outcome.

Katelyn Greene, a doctoral student at the Wake Forest School of Medicine in Winston-Salem, N.C., is tracking bone and muscle changes in the spines of astronauts who spend time on the station. She said molecular studies such as those by the Brock team can help to clarify the many different effects that space flight has on the human body, which have so far proved hard to disentangle. And there is increasing interest in looking at compounds that can help astronauts – as well as patients on Earth who are confined to bedrest – avoid muscle and bone deterioration.

“That would be a lot cheaper and a lot easier for them if we could directly target the exact mechanisms,” she said.

Dr. Fajardo, a self-professed space enthusiast, said he is motivated by the long-term implications of the research.

Exploring space “is amazing, fantastic and necessary for humans," he said. "If, in some way, our work can help that, then that’s even cooler.” 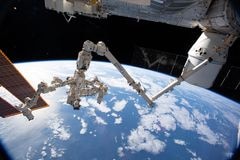 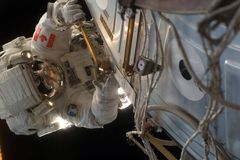