Parliament’s budget watchdog says the Department of National Defence might have deliberately lowballed the cost of buying and flying second-hand fighter jets from Australia by $200 million.

The analysis is only the latest from the parliamentary budget office to conclude the department underestimated the cost of a major military purchase, starting with aborted plans to buy F-35 stealth fighters in 2011.

But budget officer Yves Giroux says the key difference from those earlier studies is this purchase doesn’t involve a new piece of equipment and the Australian planes are very similar to Canada’s existing fleet of CF-18s, which the used jets are to supplement until Canada replaces its fighter fleet.

As a result, he says, the department should have been able to produce extremely accurate estimates for how much it would cost to buy, upgrade and operate the 18 Australian planes for the next decade.

Instead, his office’s analysis says the actual cost will be 22 per cent higher than what has been reported by the department. In raw dollars, the report says, taxpayers will be asked to pay $1.1 billion rather than $900 million.

Giroux said he was perplexed by the department’s figures and wondered whether officials might have intentionally “tweaked” the figures to prevent sticker shock or scrutiny.

“Buying 18 used aircraft and coming up with a cost estimate of $1 billion might have been a bit courageous for DND,” he told The Canadian Press in an interview.

“So that may be why they opted for the very optimistic scenario that shows a cost of less than $900 (million), just to avoid crossing that $1-billion threshold.”

The first two Australian fighters arrived at Canadian Forces Base Cold Lake in Alberta last week, and are expected to be ready for operations following some conversion work in the coming months.

That work will include taking out the engines, ejection seats and targeting pods, which are being swapped with Canadian versions and shipped back to Australia, Defence Department procurement chief Patrick Finn revealed Thursday to the Commons’ defence committee.

The Australian versions of those components are different from their Canadian counterparts, Finn said, adding Canada has enough spares from the dozens of CF-18s it has retired over the years.

The move will save time and money over the long run, he said, as pilots and mechanics don’t need to be retrained on the Australian equipment and the military won’t need to buy new spare parts.

Finn could not immediately say how much would be saved over the coming decade, and he did not otherwise comment on Giroux’s findings.

But shortly after the watchdog’s report was released, the Defence Department issued a statement arguing its cost estimate was in fact “extremely close” to the Giroux’s numbers in most areas.

Where they differed, the department said, was that its figures did not include the cost of upgrading the Australian planes’ combat systems, whereas the watchdog incorporated an estimate for that work.

The Royal Canadian Air Force says it is looking at options for those upgrades, which will also apply to the rest of the CF-18 fleet to ensure they are able to conduct missions until they are retired. That could cost more than $1 billion in all.

The department also took issue with the budget office’s stripping out more than $130 million in contingency funds officials set aside for the project, though Giroux defended that decision.

“They’re saying it may be unfair for us to remove the contingencies because it’s part of the project,” Giroux said during a briefing about the report. “Our argument to that is if you are certain to use the contingencies, it’s probably not a contingency. It’s a real cost.”

National Defence has overseen numerous upgrades on its aging CF-18s that are nearly identical to the F-18s it is buying from Australia, he said, which means its cost estimates should have been more accurate.

The budget office has repeatedly found over the years that the Defence Department underestimated the cost of major projects, including when it came to the F-35 and the navy’s new warships and supply vessels.

The Conservatives seized upon Giroux’s report as further ammunition to attack the Trudeau government’s handling of the fighter-jet file, which included putting off a competition to replace the CF-18s.

The Liberals had promised during the 2015 federal election to launch an immediate competition to replace the CF-18s, but that still has not happened. They also promised not to buy the F-35, but have since decided to let it compete with other models to be the CF-18s’ long-term replacement.

Canadian military to contract out some maintenance work on aging CF-18s to free up front line technicians
December 3, 2018 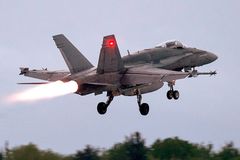 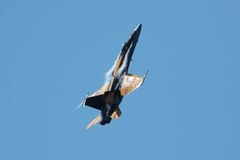