Calgary police have charged a man with the murder of his girlfriend’s three-year old daughter.

Ivy Wick was found in medical distress at a home last September and died in hospital several days later.

Officers recently released details about her death, asking for tips about any physical abuse she may have suffered before she died.

Justin Paul Bennett of Calgary appeared in court on a charge of second-degree murder.

Police say the 25-year-old is not Ivy’s biological father but is in a relationship with her mother.

They earlier said the couple had not been co-operating with the investigation.

Two fundraising pages were initially set up asking to help Ivy’s family with funds for funeral expenses. One said the girl had hit her head after falling off her bed. The other said she suffered a major brain injury in an accident.

Police said doctors who assessed the girl did not believe her injuries were caused by a fall. An autopsy revealed she died from blunt force trauma.

“Our homicide investigators have worked tirelessly to hold the alleged offender accountable and lay charges in this case,” Staff Sgt. Martin Schiavetta said in a release Monday.

“No matter how much time has passed, we are committed to making sure that each homicide is investigated thoroughly to bring justice for the victims.” 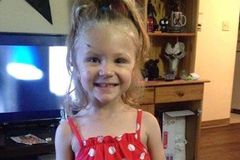