Canada could experience the same type of measles outbreaks that Washington and New York states are currently facing because of low vaccination rates and the highly contagious nature of the virus, public health experts warn.

Measles is one of the most highly contagious viruses in existence, which makes the prospect of an outbreak frightening. It’s so contagious that it can live in an air space for two hours. This means that if an infected person coughs or sneezes in a room, and then leaves, an unvaccinated person who enters the room two hours later can still get measles. According to the U.S. Centers for Disease Control and Prevention, if a person has measles, 90 per cent of those in proximity will also contract the virus unless they have been vaccinated or are immune.

Measles spreads through direct contact or through the air. It causes a range of symptoms including fever, cough and a rash. But it can also lead to serious, life-threatening complications, including blindness, inflammation of the brain and pneumonia. Children are most susceptible to the risks. According to the World Health Organization, before the introduction of measles vaccination in 1963, the virus caused 2.6 million deaths every year.

That helps explain why public health officials get so concerned when outbreaks occur, which they have been with increasing frequency in recent years. In Madagascar, officials say more than 50,000 people have been infected with measles in recent months and more than 300 people, mostly children, have died as a result. The Philippines is also battling a major outbreak, with more than 1,800 cases and 26 deaths.

So far in the U.S. this year, about 80 cases of measles have been reported, with two outbreaks ongoing in Washington and New York states. In Washington state, permissive vaccination rules are being blamed for the outbreak. In Clark County, which has so far seen 49 measles cases in children mainly under 10, only 78 per cent of young people from kindergarten through high school have been vaccinated.

While families in Madagascar have difficulty accessing the measles vaccine, outbreaks in Europe and the U.S. are often linked to vaccine hesitancy – the reluctance of parents to vaccinate their children because of unfounded fears about the treatment. Concern over the vaccine can be traced back to a 1998 paper by former doctor Andrew Wakefield, who falsely linked the measles, mumps and rubella vaccine to autism. The paper was completely debunked and retracted and Mr. Wakefield lost his medical licence, but the damage was done.

Canada has been free of endemic measles since 1998, meaning the virus isn’t constantly present. It’s now reintroduced after someone who travels outside the country gets infected. If people aren’t vaccinated, the virus can spread easily.

Canada has had a number of measles outbreaks in recent years. Joan Robinson, a pediatric infectious diseases physician and editor of the Paediatrics & Child Health Journal, said that outbreaks often occur in small communities where children aren’t vaccinated.

Part of the challenge facing public health officials is that Canada doesn’t have a national vaccination registry and provinces track vaccine rates differently, meaning it can be difficult to get an accurate, real-time sense of how many people are up-to-date on their shots – and where pockets of low immunization are.

“I think ‘patchwork’ is a good word to use to describe it,” said Vinita Dubey, associate medical officer of health with Toronto Public Health.

Only two provinces, Ontario and New Brunswick, require children to have updated vaccination records in order to enter school. There have been calls in recent years for Canada to start a national registry to help officials keep better track of vaccination rates.

Dr. Robinson wrote a statement last year for the Canadian Paediatric Society on problems with vaccination rates in Canada. She notes that in many parts of the country, rates are only estimates, but even still, they point to signs of trouble. In Manitoba, for instance, only 66 per cent of two-year-olds are up-to-date for all vaccines, including measles, mumps and rubella. In Quebec, it’s 85 per cent and in B.C., it’s 73 per cent. Experts say vaccination rates need to be 90 to 95 per cent in order to achieve herd immunity, which stops the spread of infectious disease. 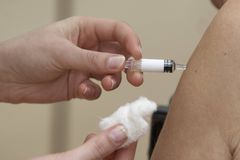 Some travellers through Pearson Airport in Toronto on Jan. 27 might have been exposed to measles
February 5, 2019 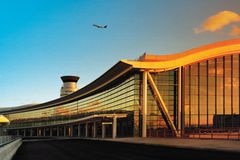