There is the comforting long-term fiscal picture in the budget, which foresees steady economic and productivity growth shrinking Canada’s debt burden ever smaller over the next 30 years.

And then there is the fiscal framework – devoid of any bold economic measures that could turn that long-term projection into reality.

The Liberals correctly diagnose the deep-rooted economic problems that Canada faces, and that threaten to mire this country in a low-wage, less-prosperous future. An intensifying global competition for capital, a persistent lack of private-sector investment and the resulting flaccid productivity growth are huge challenges that the budget acknowledges.

“This budget is focused on economic growth for today, tomorrow and for decades to come,” Finance Minister Chrystia Freeland told reporters on Thursday.

The government even gives a nod to a recent report from the Organization for Economic Co-operation and Development that places Canada dead last in potential economic growth through to 2060. And Ms. Freeland framed the issue well, saying that it comes down to ensuring that the next generation of Canadians “have more prosperous lives than we do.”

It’s just that the government is not proposing any policy shakeup that would alter the projection of Canada’s last-place standing in that critical economic race.

Rebekah Young, director of fiscal and provincial economics at Scotiabank, described the government’s approach as “spend, tax and pray.”

There is lots of spending, on an ever-expanding list of initiatives. Higher taxes await the financial sector and the oilpatch, with no broad-based tax relief.

And as for the prayer – that’s the optimism baked into the government’s economic assumptions in the short term, flowing into its overly optimistic outlook over the next 30 years. Instead of proposing measures to boost labour productivity, for instance, the government simply assumes it will suddenly increase 25 per cent above its average since 2008.

There are some measures that nibble around the edges of Canada’s investment, productivity and growth problem.

Enhanced tax credits for the mining of critical minerals, needed for the batteries of electric vehicles, will have some impact. But what happens after those minerals are pulled out of the ground? The budget is silent on how to ramp up private-sector investment where the money, jobs and higher wages really are. That means not just turning those minerals into batteries, and installing those batteries into vehicles, but creating the intellectual property to invent new green technology.

As for broader changes, the budget does proclaim the government’s intention to “undertake a review of further ways to build innovative companies.” So, there is a plan to come up with a plan, at some point.

Similarly, there are modest changes to small-business taxation. Currently, small businesses pay a reduced rate of 9 per cent on the first $500,000 of taxable income, significantly lower than the general corporate tax rate of 15 per cent. But that favourable treatment ends after a business’s capital employed in Canada reaches $15-million. The budget proposes to boost that threshold to $50-million, with an estimated $660-million in tax savings over five years, starting in fiscal 2022-23.

That will undoubtedly be welcome news for small-ish business owners looking to grow a bit more. But that measure does not address the primary challenge for Canada’s economy, namely clearing the path for medium businesses to become large businesses, and for large businesses to become global leaders. A slightly larger local construction company will be nice for the owners, and extra employees, but not what the country needs to shake up innovation and productivity growth.

Then there are policies that seem to be summoning the spirits of 1970s-style economic interventionism: the Canada Growth Fund, whose mission is to “attract substantial private-sector investment” to reduce greenhouse-gas emissions, to diversify the economy in new and traditional sectors and to support the restructuring of supply chains. One question: What falls outside of its mandate?

The government also proposes to create the Canadian Innovation and Investment Agency, with $1-billion in funding over five years. It would be a “market-oriented innovation and investment agency,” with details to be announced later this year.

Left unexplained is how those new agencies will avoid replicating the struggles of its philosophical growth and innovation predecessors, the infrastructure fund, and the supercluster program. And left unexplored is the irony of Ottawa launching a “market-oriented” government agency rather than figuring out how its policies are getting in the way of the private sector, and orienting itself accordingly.

Of course, there is ample funding for the hoped-for transition to a greener economy. But the reality is that jobs in the green economy are likely to be less, not more, productive than those in the fossil-fuel industry, increasingly hemmed in by this government.

The budget’s big measures are on the spending side. National child care will boost the size of the labour force, and the economy, though it will do little for productivity growth, even in the best case. (And the budget’s forecast of gently declining debt levels does not include the billions of dollars that a national pharmacare program or bigger health transfers to the provinces would cost.)

Still, those are at least actions the government is taking. On several key issues, the Liberals are merely promising to come up with strategies at some later juncture. That’s the case with a new framework for intellectual property, A review is also in the works for the tax regime that supports scientific research and experimental development.

And then there is a review for a perennial contender in innovation policy – reducing interprovincial trade barriers. Ottawa says it is “committed to providing leadership” on reducing such barriers.

There is no lack of big ideas from outside the government that the Liberals could have appropriated: A radical reshaping of intellectual-property policy to capture the riches of innovation is one example. Boosting cash transfers to the provinces on the condition that they lower trade barriers is another. Nothing with ambition of that scale makes an appearance in the budget.

Instead, there are forecasts seemingly built on a prayer, and an assumption that Canada’s productivity problems will simply disappear on their own. 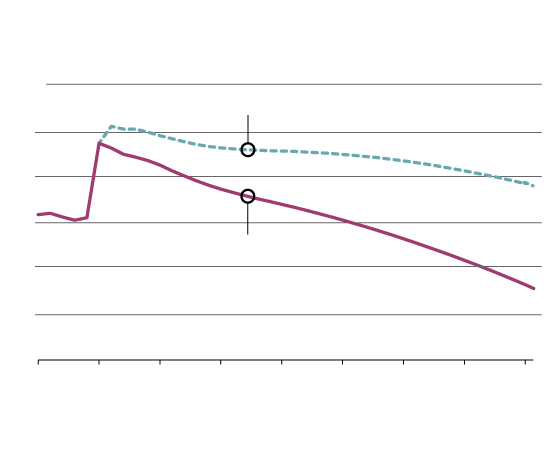 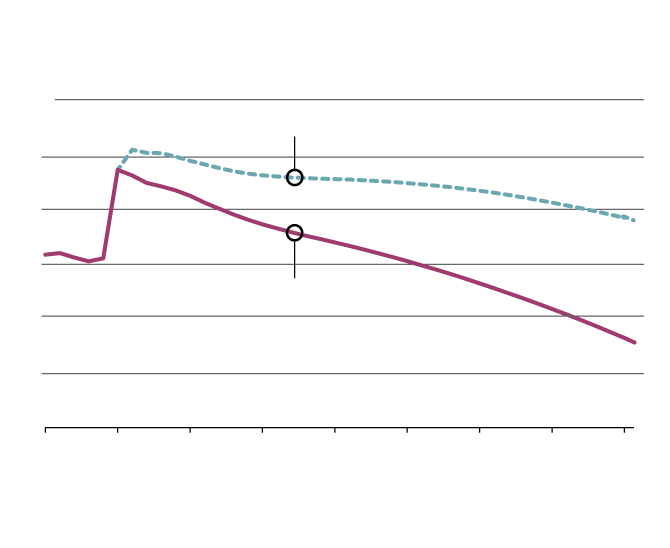 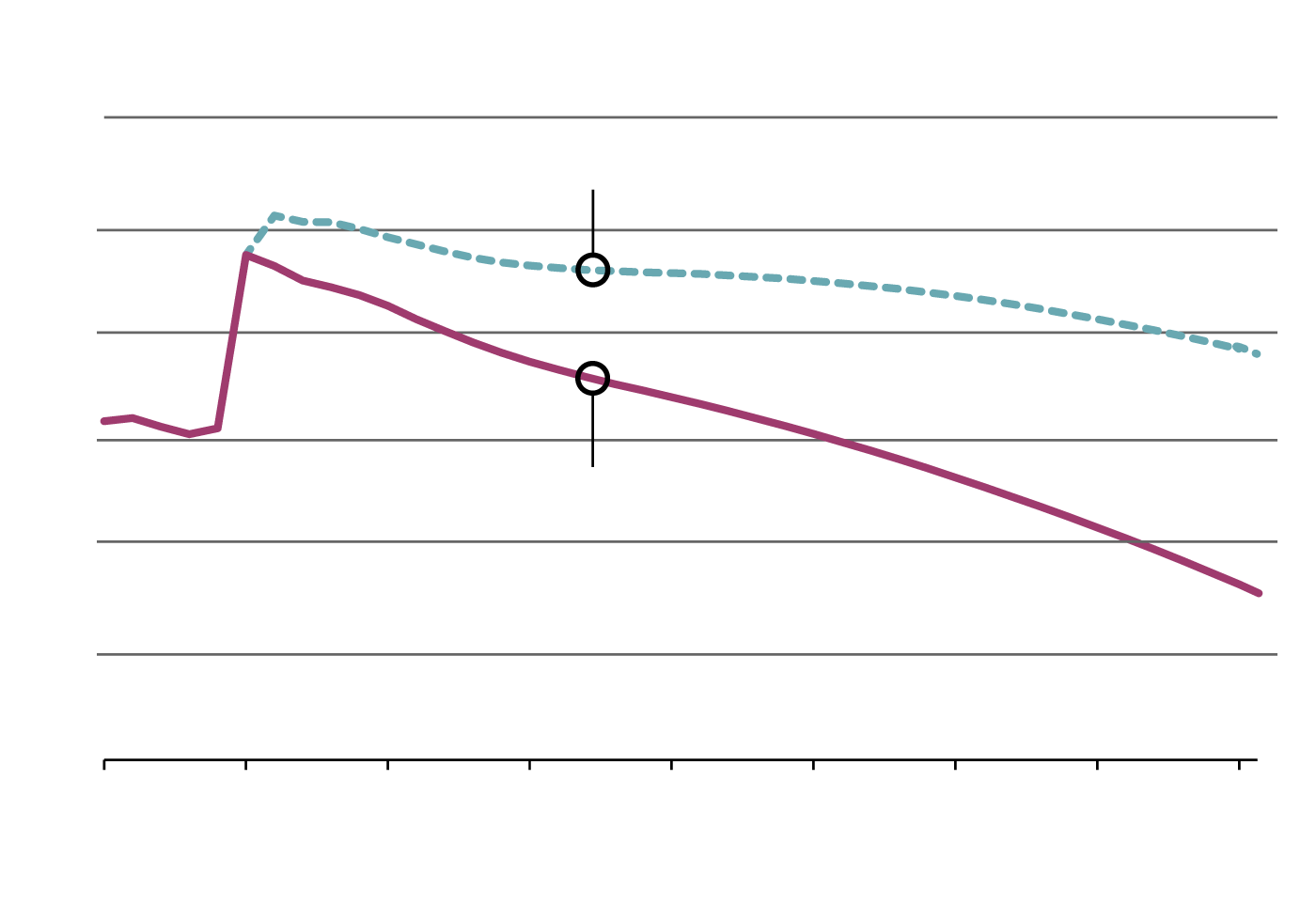 The budget provides a long-term view of the federal debt picture, showing a decline from the pandemic debt binge over the next 30 years. By fiscal 2055-56, net debt as a percentage of gross domestic product will have contracted to just 16.5 per cent, close to a two-thirds drop from the projected 46.5 per cent for the current fiscal year. That is a marked improvement from last year’s budget, when the same projection foresaw a debt-to-GDP ratio more than twice as high, at 38.7 per cent, at the mid-century mark.

The brighter picture isn’t because of a fundamental improvement in Canada’s economic performance. Instead, there is a short-term inflation-driven bump in revenues that gives the government a head start on reducing the debt burden. The Finance Department actually trimmed its estimate of long-term labour productivity growth to 1 per cent from last year’s 1.2 per cent. Even that is still well above the post-2008 average of 0.8-per-cent labour productivity.

That may seem like quibbling over fractions. But it means that Ottawa believes the country’s work force will become 25 per cent more productive, somehow. That kind of leap entails an economic revolution, and a commitment to big ideas. Instead, the Liberals propose old-school incrementalism. And a review.

explainer
Here’s a preview of what Canadians can likely expect from the 2022 federal budget
April 5, 2022
Federal budget 2022 to include $10-billion for affordable housing
April 6, 2022