A new federal law aimed at speeding up the justice system has prompted at least 25 court hearings across Canada over what some lawyers and judges view as a glaring omission in the law.

The hearings, which have split judges, 16-9, have addressed a single question: Do jury-selection rules that took effect on Sept. 19 apply only to charges laid after that date, or to all cases already in the system in which a jury has not yet been chosen?

The confusion means that some jury verdicts of guilt – including in at least one murder case in Ontario – could be thrown out. New trials would almost certainly have to be held in those cases.

In case after case – in eight provinces, and in just two months – judges have written long, complex judgments. They have split, with the bigger group saying the new rules apply only to new cases.

It didn’t have to be this way, straining the resources of busy courts, the judges say.

“This omission has caused great confusion and extensive litigation in criminal courts across Canada,” Ontario Superior Court Justice Jonathan Dawe wrote in the latest ruling, on Nov. 22. (In his view, the rules apply only to new cases.)

But the federal government insisted in an e-mail to The Globe and Mail that there was no omission, and that the law is clear: Nothing needed to be said about cases caught in the transition from old rules to new. The Globe then asked whether the law applied only to new cases or to all cases already in the system, and a government spokeswoman said it was new cases only.

“In accordance with [the] federal Interpretation Act, and existing jurisprudence, these changes apply as of the coming into force date and moving forward,” Rachel Rappaport, spokeswoman for Justice Minister David Lametti, said in an e-mail late Sunday afternoon.

And if that interpretation is accepted by courts from here on, “a whole mountain of jury trials could fall,” Toronto lawyer Dirk Derstine said Sunday night, "because it wasn’t clear to a series of Superior Court judges” in Ontario. He estimated 30 guilty verdicts are at risk. He is appealing the first-degree murder conviction of Pardeep Chouhan, in the 2016 shooting death of 31-year-old Maninder Singh Sandhu of Brampton, Ont., to the Ontario Court of Appeal on Dec. 19, on this very issue, and on the constitutionality of the new jury-selection rules.

Use of the wrong procedures for jury selection is considered so serious a matter that even if the accused consents to it, the verdict must fall, Mr. Derstine said.

The federal law ended peremptory challenges in jury selection, which provided the defence and Crown with opportunities to reject prospective jurors without explanation.

To the legal community, much of which opposed the ban on peremptory challenges, the large number of hearings on the issue highlights the problems of basing criminal law on a single incident or case.

The new rules on jury selection were drafted as a swift response to a trial that had just occurred – the acquittal on Feb. 9, 2018, of white farmer Gerald Stanley in the shooting death of an Indigenous man, Colten Boushie. The law, known as Bill C-75, was introduced in Parliament on March 29.

The new rules were not themselves meant to make the justice system work faster. But the burdensome effect on court resources resulting from the lack of clarity on jury selection thus far runs counter to the main purpose of the sweeping law they were a part of. That law contained major structural changes to the criminal-justice system, such as scrapping most preliminary inquiries, in response to a Supreme Court ruling in a 2016 case, called Jordan, which set time limits for criminal proceedings. (The same issue around whom the law applies to has also bedevilled the changes to preliminary inquiries.)

“All Parliament had to do was include one extra line in drafting the legislation and that would have avoided all this litigation. I often feel the people drafting these legislative changes don’t always have their feet on the ground or in the trenches,” Ms. Boisvert said.

Prosecutors started out taking the opposite position from the one set out by the Justice Department to The Globe on Sunday.

It’s in Ontario where the largest number of cases is in danger of falling. Eight of the nine cases in which judges ruled the jury selection rules apply to all cases already in the system were in Ontario.

By contrast to the rushed section on peremptory challenges in jury selection, the government spent three years, even in the face of a high-profile problem with delay, to draft changes to streamline the justice system.

Ms. Rappaport, Mr. Lametti’s spokeswoman, said the government did not make a mistake or an omission in drafting the law. (It was Mr. Lametti’s predecessor, Jody Wilson-Raybould, who introduced the rule changes.) “Transitional provisions were not required as existing law adequately addresses the temporal application of these amendments,” she said in an e-mail. She declined to say why so many hearings have been held if the transitional provisions were not required.

Why have the courts found the question so complex? Judges say that procedural changes can be applied retrospectively – that is, to all cases already in the system waiting to begin the jury-selection process. However, changes of substance – those affecting people’s rights – can be applied only to new cases. Some judges say the new jury-selection rules appear to be procedural but are in effect substantive. 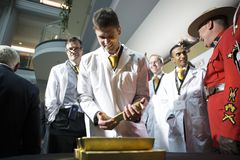