Small-business owners are complaining about Canada Post delivery delays around the holidays.

On Saturday, Felicia Laplume, the owner of a small candle business and several local markets in Toronto, published an open letter expressing frustration with Canada Post over shipping delays.

“As of right now, we have over 100 packages sent the beginning of December that won’t arrive to their customers for Christmas. We did everything right on our end. The problem is you didn’t,” Ms. Laplume wrote on the social-media pages of Citchen Candle Co.

Her post garnered hundreds of supportive comments, striking a chord among the ranks of small-business owners, artisans and crafters. Year-round, small-business owners depend on Canada Post, but as more Canadians choose to purchase handmade and one-of-a-kind gifts from online retailers such as Etsy, the service is particularly important around the holidays.

Last year, rotating strikes through the end of October and into November put pressure on Canada Post during the Christmas rush and led some retailers to warn about delays. In interviewing a dozen small-business owners across Canada, many told The Globe and Mail that this year’s delays have been far worse than in 2018.

Susanne Watson-Bongard, who owns Rtsygirl, said that the biggest order she’s ever shipped – ornaments for the staff of a vineyard – arrived several days late and after the Christmas party they were meant for. Hilary Pennie, who owns a handmade-jewelry company called Pretty Pennie Jewellery, said she expects to spend an additional $750 to $1,000 re-sending items that did not arrive, adding that “the lack of compassion and sheer rudeness of their customer-service staff over the phone has been shocking.”

In an e-mail, Rod Hart, Canada Post’s chief customer and marketing officer, said the company experienced delays in early December owing to “almost two weeks’ worth of parcels arriving in one week,” compared with the year before. He said the company had hired 3,800 additional seasonal employees and increased post office hours to deal with the increase.

Mr. Hart did not respond to a question about Canada Post’s policy for refunding small-business customers for the shipping cost of items that did not arrive on time.

For Ms. Laplume, issues started arising in mid-November. Shipments were getting lost or languishing in processing centres. This past weekend, the tracking information for several packages shipped Dec. 1 updated to show they will not arrive until Dec. 27. She estimates Citchen Candle Co. has lost between $5,000 to $7,000 refunding, replacing and reshipping products this holiday season.

However, Sam Bones, who sells hand-sewn and limited-run patches through her online Etsy shop Bones and Stitches, says she can’t easily replace a product that gets lost or delayed during shipping. A three-inch hand-sewn patch can take her 15 hours to make. Yet, Ms. Bones said that one in every five packages she is shipping through regular mail is not arriving.

“When things go missing and need to be replaced, I’ll add another thing to the pile, I’ll eat dinner at my desk. It takes up all of your time when you make handmade things, because you don’t want to disappoint your customers,” she said.

Responding to customers’ concerns over shipping eats into your working hours, added Vera Stroebele, who sells handmade jewelry through her Etsy shop Bracel’essence. One of her orders – shipped on Nov. 26 – has yet to arrive, she said, and the occasion that the customer bought it for has passed.

The small business owners The Globe spoke with emphasized that individual postal workers were clearly working extremely hard and that their issues were at a management or systems level.

Yet, several said they were moving away from Canada Post altogether. Vanessa Moncrieffe, who owns WellNESS by Nessa, said she switched to Chit Chats, an alternative shipping service, in early December after a package failed to arrive to a customer and others arrived nearly destroyed. She plans to cancel her small-business account with Canada Post. 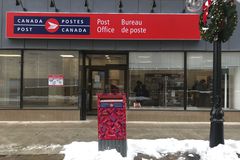