Environment Minister Jonathan Wilkinson says Ottawa is on track to meet its 2021 target for regulations banning certain single-use plastics, which he said would likely include bags and straws.

In an interview with The Globe and Mail on Thursday, Mr. Wilkinson said the government expects to release a proposed list of banned products in the coming months. The list will be finalized and solidified in regulation after a consultation period. But while the rules are slated to be in place by 2021, it could be a while longer before they fully take effect. “There may, for some products, be phase-in periods,” Mr. Wilkinson said.

Prime Minister Justin Trudeau promised in June to regulate plastic waste as part of a national plan to reduce the amount of packaging that has overwhelmed municipal waste programs and is polluting the environment.

The strategy could include implementing standards that make sure some products are made up of a certain percentage of recycled content. It could also involve working with the provinces and territories toward extended producer responsibility (EPR) programs, which require manufacturers and sellers to manage the collection and recycling of the plastic waste they put into the market.

With the release Thursday of a draft state-of-the-science assessment on plastic pollution, which was conducted by Environment and Climate Change Canada in partnership with Health Canada, the government is armed with the scientific basis it needs to take regulatory action under the Canadian Environmental Protection Act.

The 112-page document says that macroplastics (those with particles greater than five millimetres) cause harm to the environment, including as it relates to marine life ingesting pieces of plastic or getting tangled up in them. The assessment said the environmental and human-health impacts of microplastics – which can be absorbed into soil, accumulate in freshwater bodies such as the Great Lakes, or be released into the air through tire wear and the shedding of clothing fibres – are less clear and sometimes contradictory.

Still, the assessment was firm in its recommendation: "In adherence with the precautionary principle, action is needed to reduce macro- and microplastics that end up in the environment.” The precautionary principle is one of CEPA’s guiding concepts and says that “where there are threats of serious or irreversible damage, lack of full scientific certainty shall not be used as a reason for postponing cost-effective measures to prevent environmental degradation.” The final version of the assessment will be released some time after public consultations on the draft close on April 1.

The government has used a state-of-the-science assessment, which reviews existing research, to impose regulations before. Two years ago, Ottawa banned the manufacture, import and sale of plastic microbeads found in toiletry products.

Global plastic production, which relies on crude oil and natural gas as key ingredients, has increased at a rate faster than any other material, the assessment says. It is cheaper to make new plastic than buy recycled plastic. Demand for recycled plastic, then, is low, contributing to waste. And the problem has only escalated since 2018, when China said it would stop buying recycling waste from other countries, including Canada.

According to the assessment, 86 per cent of plastic waste in this country goes to landfills. Only 9 per cent is recycled and 4 per cent is incinerated for energy recovery. One per cent is directly released into the environment, for example as litter and ocean-bound waste. That is equivalent to 29 kilotons. Of all the plastic waste generated in 2016, nearly half was packaging.

Greenpeace Canada said in a statement that the ban on single-use items should include cups and lids, bottles and caps, bags, straws, cutlery, Styrofoam, containers, wrappers and cigarette filters. “The plastic crisis is connected to the climate crisis and the oceans crisis,” the group said.

Environmental Defence said that if the government needs to pick up the pace. “Wildlife, human health and our environment all depend on it,” the group said in a release.

Jurisdictions around the world have already taken steps to limit plastic waste. The European Union adopted a regulatory framework in March that includes a ban on single-use plastics for which alternatives exist (for example straws, coffee stirrers and cutlery), EPR schemes for certain products, and recycled-content targets for plastic bottles. The rules come into effect in 2021. China has said it will ban plastic bags in major cities by the end of this year.

Mr. Wilkinson said that while people have become fixated on the single-use plastics ban, the focus should be on the broader move toward a circular economy that includes recycled-content standards and targets for recycling rates. This, he said, will help reduce Canada’s greenhouse gas emissions as the country strives to reduce emissions by 30 per cent below 2005 levels by 2030.

Matt Keliher, the City of Toronto’s general manager of Solid Waste Management Services, said in a recent interview that Ottawa must avoid unintended consequences of a ban on certain products. “If we ban the so-called single-use plastic bag, will the bags just become thicker?” he said. “At the end of the day, the big message is: Reduce.” 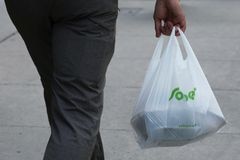