Vaping-related illness has emerged in Canada, marking the first link to a wider outbreak in the U.S. that has prompted officials to introduce flavour bans, increase the age of purchase and bring in other restrictions on the products.

At least one case of severe vaping-related lung illness has been confirmed in London, Ont., and Toronto Public Health has received reports of other possible cases in recent weeks.

On Wednesday, a spokesman for Ontario’s Health Ministry said Health Canada informed it of two possible cases of vaping-related lung illnesses that need to be investigated. It’s unclear whether one of the cases is the same as the one reported by London health officials. Health Canada would not comment.

Vaping: What’s known about the lung disease racking the U.S., risks to you and what Health Canada is saying

Canadian regulators have so far resisted crackdowns, despite warnings from health advocates who say delays endanger the health of young people.

“I think the response of most governments across Canada reflects indifference and inertia,” said Andrew Pipe, chair of the Heart and Stroke Foundation of Canada and a professor of medicine at the University of Ottawa.

“We need quick and decisive action to remediate … the negligence of governments in failing to regulate these products, despite the fact that they were warned some time ago.”

On Wednesday, officials at the Middlesex-London Health Unit confirmed that a high-school student in the area had gone to hospital with a vaping-related illness in recent weeks.

In response to queries from The Globe and Mail, Toronto Public Health said on Wednesday it has also received reports of some possible vaping-related illnesses in recent weeks, but did not disclose how many. The agency said in a statement it has asked the clinicians involved in those cases to seek patient permission to share information with the agency for further investigation, but the agency has “yet to receive this information.”

While the London case is the first confirmed vaping lung illness reported in Canada, hundreds of people have been sickened by the severe respiratory illness in the U.S. Officials there say at least seven people have died and 380 from 36 states have fallen sick. (The U.S. Centers for Disease Control and Prevention previously said about 450 people were sick, but have revised the number to include only those cases that have a confirmed or probable link to vaping.)

The Ontario student, who has since recovered and is at home, was at one point on life support in the intensive care unit at a London hospital. Officials did not release many details, including the student’s age, name, gender and what type of vaping product he or she used. They also declined to say whether the student was vaping tetrahydrocannabinol (THC), which has been implicated in many illness reports in the U.S.

Ontario Health Minister Christine Elliott said on Wednesday she has issued an order for all hospitals to report vaping-related illnesses to the province’s chief medical officer of health to help ensure any potential cases are being captured and analyzed.

In an interview, Ms. Elliott said the government would consider taking other measures, including advertising or flavour bans, to combat the problem of youth vaping and the associated health risks.

On Wednesday, federal Health Minister Ginette Petitpas Taylor would not commit to further action, such as a ban on flavoured vaping products.

“We shouldn’t wait until there’s consequences to start removing stuff,” said Christina Sperling, senior director of programs and services with the Ontario Lung Association. “I think there is a lot more that needs to happen.”

On Thursday, a coalition of Canadian health organizations will gather in Ottawa to demand the federal government launch an immediate crackdown on vaping products. The concerns with vaping extend beyond the cases of severe lung disease. The organizations point to broader, long-term health risks associated with nicotine and dangerous chemicals that are being inhaled into users’ lungs.

“There’s a lot more that could be done,” he said.

Officials don’t know what is causing the severe lung illness in affected individuals. While many of those who have fallen ill were vaping THC, some were not. 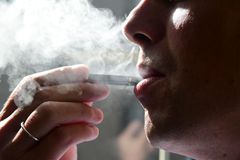