Canada’s Arctic waters are widely contaminated by microplastics – minuscule particles and fibres that come from plastic debris that has broken down and remains in the environment with unknown effects.

In the first large-scale survey of its kind in the region, researchers sampled more than 30 locations across the eastern Arctic and Hudson Bay and were able to detect microplastics nearly everywhere they looked, including in surface waters, marine sediments and in the guts of zooplankton – the tiny, floating organisms that occupy the base of the Arctic food chain. 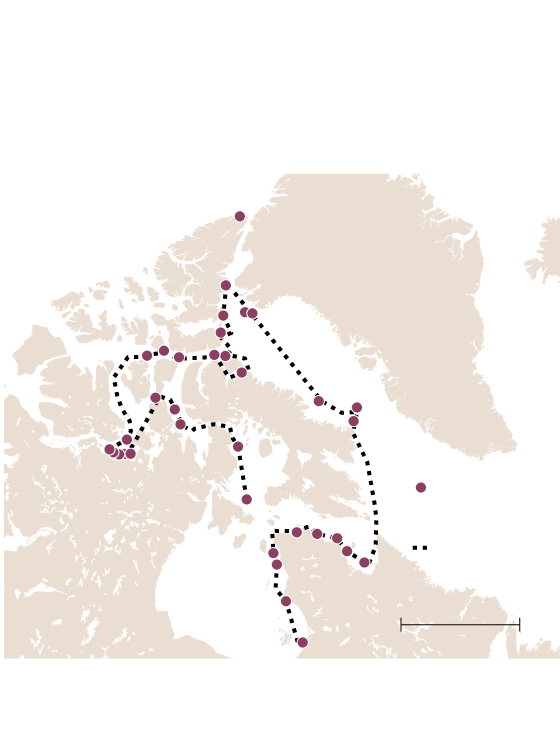 Plastic particles and fibres were detected in

seawater, sediment or plankton in nearly all of

the more than 30 sites that were sampled during 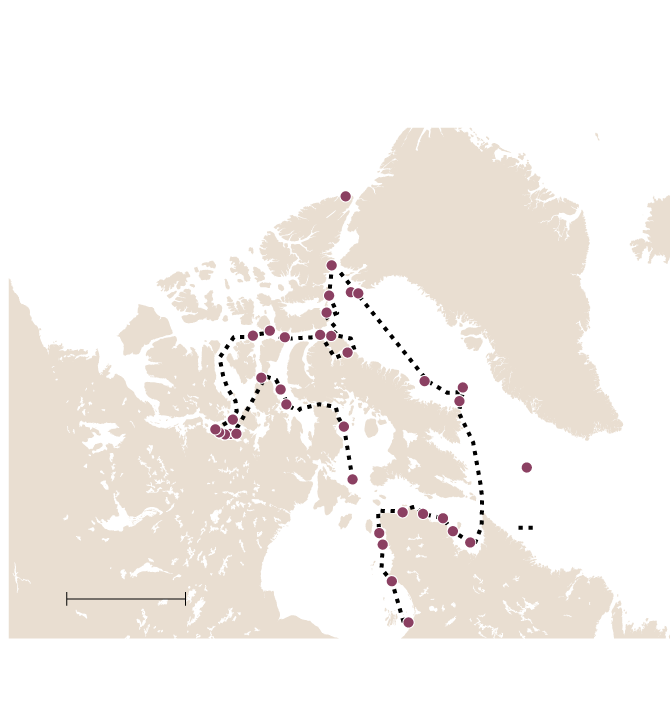 Plastic particles and fibres were detected in seawater,

sediment or plankton in nearly all of the more than 30

sites that were sampled during a 2017 survey of Canada’s 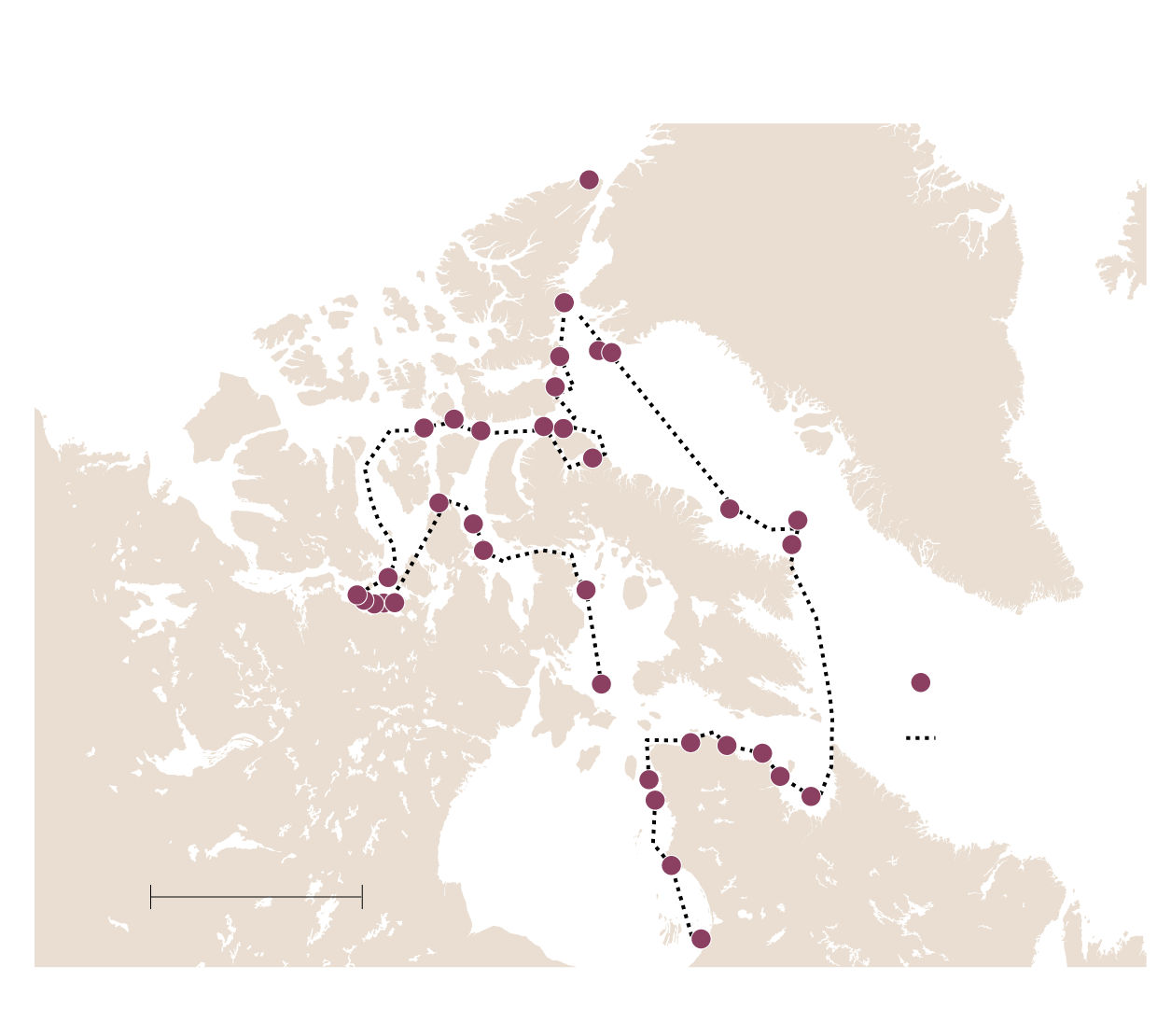 Plastic particles and fibres were detected in seawater, sediment or plankton in nearly all of the

more than 30 sites that were sampled during a 2017 survey of Canada’s Eastern Arctic waters.

And while the long-term effects of the materials on the environment and on human health remain largely unknown, the results suggest widespread exposure is becoming inescapable, even for people living in the most remote areas of the globe.

The study, led by Chelsea Rochman, an ecotoxicologist at the University of Toronto, also concluded that the vast majority of the microplastics detected did not originate in the Arctic but were transported thousands of kilometres from the places where they were originally used and discarded.

The results were published on Thursday by the Canadian research journal Facets.

The study was the result of a painstaking analysis that began in 2017 when Dr. Rochman and members of her lab traded stints on board the Canadian research icebreaker Amundsen as it made its way around the eastern Arctic over the course of the summer. The sampling was conducted as far south as the Belcher Islands in Hudson Bay and as far north as Ellesmere Island in the High Arctic. The group also studied snow samples collected by a different team near Alert, Nunavut, a Canadian Forces base that is the world’s most northerly permanently occupied location.

Water samples were taken from the ocean’s surface in metal buckets lowered from the ship and while sediments where hauled up from the seafloor. The zooplankton were collected in fine mesh nets that trailed behind the ship.

All of the samples were then analyzed using a variety of laboratory methods, including individually identifying and sorting tiny bits of plastic by microscope.

In their study, the team reported that they detected microplastics or other human-made materials in 85 per cent of the sediment samples and in 90 per cent of water and plankton samples. Areas where the microplastics turned up did not correlate with proximity to local communities, Dr. Rochman said, which implies they originated elsewhere.

Christopher Reddy, a senior scientist at the Wood’s Hole Oceanographic Institute in Massachusetts who was not involved in the study, said that the team deserved credit for their careful methods because of the risk of contamination of samples by microplastics that may be present on the ship or in the laboratory setting.

He added that the work set an impressive standard for how to investigate such a diverse and poorly understood pollutant, particularly in the Arctic where, because of logistics and cost, scientists have limited access.

“If you’re going to get that opportunity you’d better do it right – and they did,” Dr. Reddy said.

The study reflects the growing interest in the widespread transport and accumulation of microplastics around the world, including their presence in food, water and in the air. It was conducted on board the Amundsen as part of a larger federally supported research effort known as the Northern Contaminants Program.

Liisa Jantunen, an environmental chemist with Environment and Climate Change Canada who is a co-author of the study, said that Northern communities are concerned about what effects, if any, the small but ubiquitous particles are having on marine life. Potential effects on human health are not yet known but are the subject of continuing research.

She said that compared with other pollutants, including many that have been studied for decades with known toxic effects, plastics are difficult to assess in part because they are so diverse and may contain dyes and other compounds that are part of their manufacturing process. During long exposure in the environment, plastic particles can also act like sponges that pick up other pollutants.

“What we find in the environment is not just pure plastic, it’s always with other chemicals,” Dr. Jantunen said.

She said follow-up work is under way to better understand the accumulation of microplastics throughout the marine food chain, including in fish, where little is currently known. The research is supported under an initiative launched by the federal government last year, which also included the pledge to ban single-use plastics under the Canadian Environmental Protection Act as early as 2021.

Dr. Rochman said that more research is needed to understand whether the Arctic environment is accumulating microplastics faster than other regions, and the routes by which the contaminants are transported by air and water.

Those questions also lie at the forefront of understanding what plastic is doing in the environment around the globe, Dr. Reddy said

“You find a piece of plastic and you want to know where did it come from?” he said. “What happened to it when it went on this ride … and how it may change?”

Study of Arctic Ocean shows top of the world changing
April 26, 2020
The frozen front line: how the Canadian military and its local partners are preparing for a warming Arctic
March 6, 2020
Canada expected to support heavy fuel ban in Arctic despite costs to Northerners
February 16, 2020